It’s the Summer of Soccer–excuse us, football–and the United States Women’s National Team (USWNT) are in France to defend their 2015 title at the 2019 Women’s World Cup. While most of us would like to be across the pond at a pub cheering on the red, white and blue, or you’re preferred nation, we’re stuck in the District, where our summer will undoubtedly feel swampier than last year.

The World Cup will certainly draw hordes of crowds to neighborhood eateries thanks to the melting pot that is Washington, D.C. Even if you can only escape work for 90 minutes, read on to see where you can watch your favorite team compete to bring home the gold.

Franklin Hall is making sure women completely represent all areas of this competition. Not only will they show every USWNT contest, but the bar will also serve up to 10 beers from breweries that are either owned by women or a female brewer is in charge of operations.

Team USA fans will feel right at home at this Chinatown pub. They hosted a stellar World Cup finale watch party last summer when France defeated Croatia and they’re back to cater to all football fanatics. All USWNT games will air live (with sound!) and naturally, they’ll have specials on buckets of Budweiser, Bud Light, and Michelob Ultra. Find more information via Facebook, here.

This H. Street-area spot is a retreat for English Premier League fans, so of course, The Queen Vic will open their doors to World Cup enthusiasts. Team England and USA fans can find solace here, as they plan on showing game from both nations. As for drink specials, Heineken will be available for $5 each.

The energy of fans are felt from the moment you walk into Courthaus Social, which year-round hosts a slew of Premier League watch parties. The seating here is beer garden-esque and the food is German-inspired. The Reuben rolls and social nachos are a couple of our favorites, but you can’t leave without trying one of their sausages.

All Washington-area football fans have probably frequented Lucky Bar at least once, which is known to get pretty rowdy during contentious matches. There’s so much to love about this saloon– the atmosphere ranks high on the list. Footy fans of all backgrounds will feel at home here, and we recommend ordering the English breakfast (weekends only) to fuel up before a long afternoon of cheering.

Worried about missing your favorite team play during work hours? The Fairmont Hotel has you covered. Not only will matches play live, but the hotel will also re-air them later in the evening. The international fare from France, Brazil, England (fish & chips), Spain (Spanish gazpacho), Germany and the USA (bacon sliders) all start at $9 each. Read our brunch review, here. 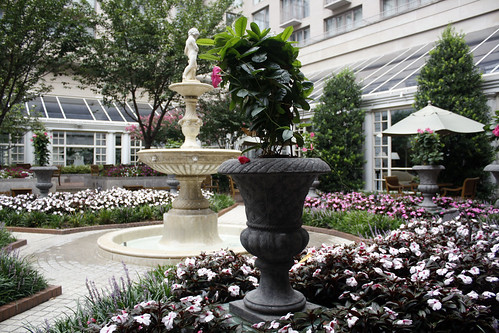 One step into this Arlington pub and it’s like you’ve entered a hometown spot in Europe. Four Courts lives and breathes football, and it’s evident by the array of scarves that line their walls. Food and drink specials will occur daily here but expect 16 oz. Heineken bottles for $5 throughout the entire tournament.

Dock FC doesn’t have quite as much clout as some of the aforementioned spots. However, that’s not stopping them from throwing a proper World Cup fête. Their food is an appropriate fusion of Mexican and American, so you have the choice of a BLT or Cholula chicken wings. Come for the football, stay for the diverse menu options.