The Upper West Side is one of those NYC neighborhoods I don’t frequent nearly as often as I should. Every time I make my way up there with the beau, we’re always reminded of its refreshing charm, quaint local shops, and plethora of bars and restaurants. 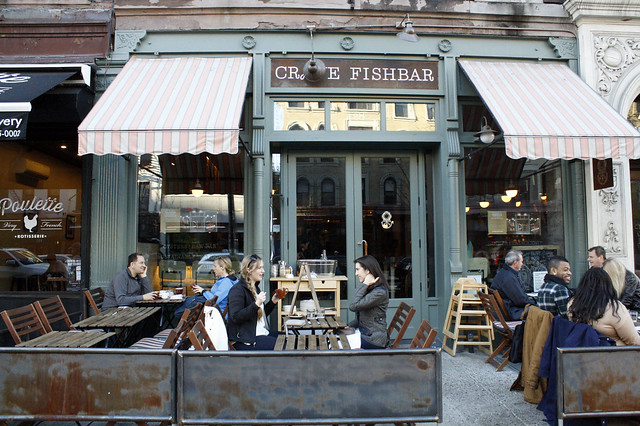 We were familiar with Crave Fishbar’s Midtown location and were excited to learn we had been invited in for brunch at their recently opened UWS location, as it gave me an excuse to venture up Amsterdam Ave. on a beautiful fall day. 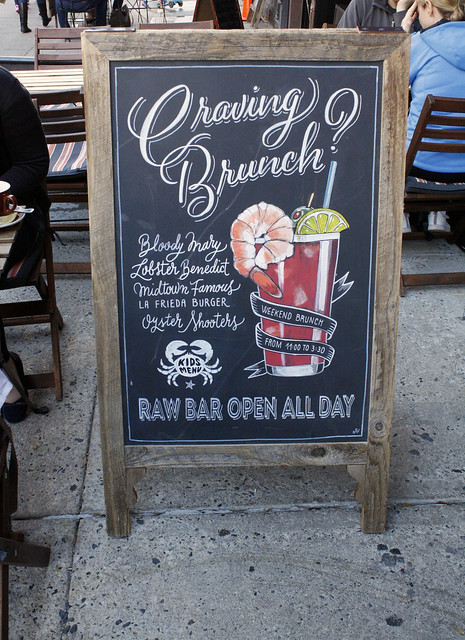 The weather was beautiful, especially for a mid-November day, and we weren’t surprised to find the patio to be full when we arrived. We entered the restaurant and were instantly drawn in by the warm, rustic decor. Wood paneled walls were lined with large, oversized round mirrors that resembled portholes inside old ships. 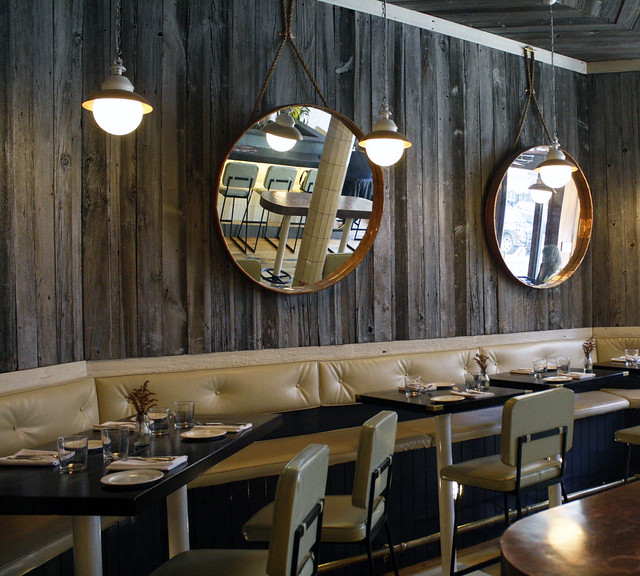 The raw bar and communal bar tables had copper countertops that were perfectly complimented by a mixture of light yellow barstools and mint green bar stools. We particularly loved the chalkboards throughout the space, which featured specials in beautiful typography. 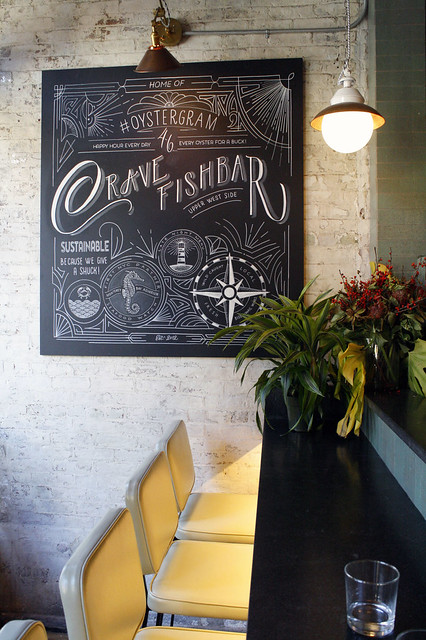 Crave Fishbar has a split-level layout, and the back room has a totally different feel than the main dining area. It’s much more modern, with a light wood ceiling accented by copper light fixtures and dark teal walls. A small nook has adorable under-the-sea wallpaper, complete with a squid and a school of fish. Overall, the restaurant is pretty large by Manhattan standards and would be great for larger groups. 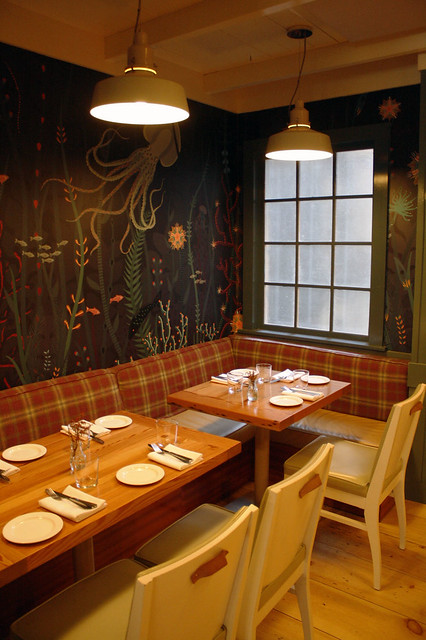 Obviously, being at a seafood joint, we knew we had to dive in to our meal with something from the raw bar. I made the executive decision to start with the Lil’ Pick-Me-Up, which included six oysters and a Crave Fishbar (CFB) Bloody Mary. “It’s basically like paying for oysters, and getting a complimentary Bloody Mary,” our server exclaimed. 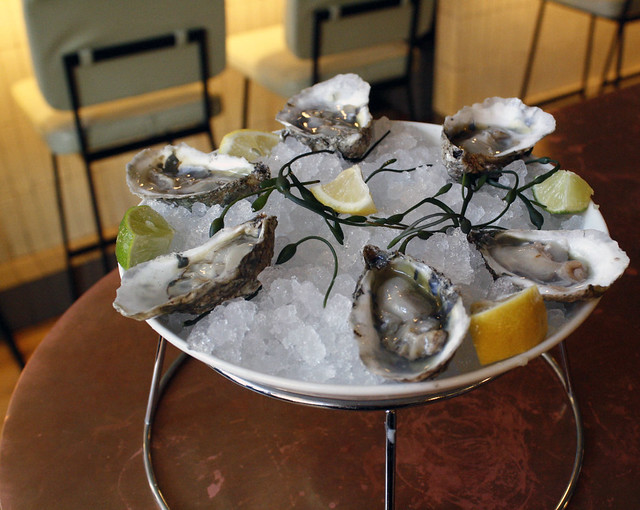 Since my beverage was essentially included in our oyster order, Fields perused the cocktail menu to see what tickled his fancy. He definitely had his work cut out for him, as Crave offers cocktails on tap, a great beer selection, and even oyster shooters and picklebacks. 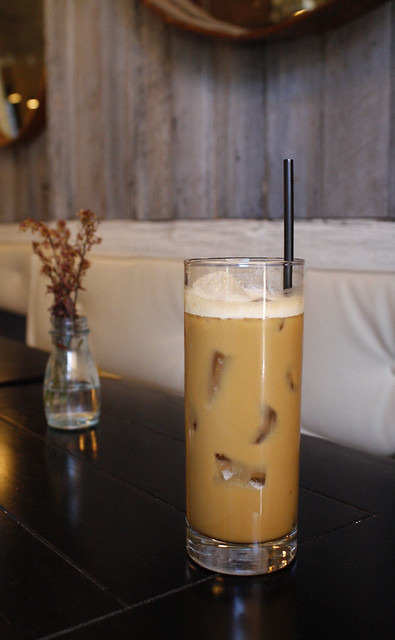 Ultimately, he decided to go with the Bangkok Red-Eye in an effort to get his intake of caffeine and booze in one beverage. Described as a spicy, boozy, creamy iced coffee, this drink was reminiscent of a Thai iced tea–with a very apparent boozy kick. We both really enjoyed this cocktail, and Fields was happy with his choice. 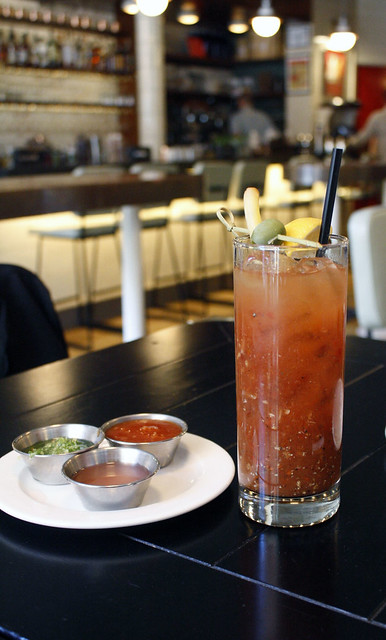 My Bloody consisted of a 16 ingredient house mix (!!) and I was immediately pestering our server to determine what the ingredients were, as I couldn’t remember ever consuming a brunch cocktail that contained so many. At first, I was worried it would be overpowering but all the ingredients–including Stout beer, Serrano chilis, fish sauce, and red onion–played very well together. 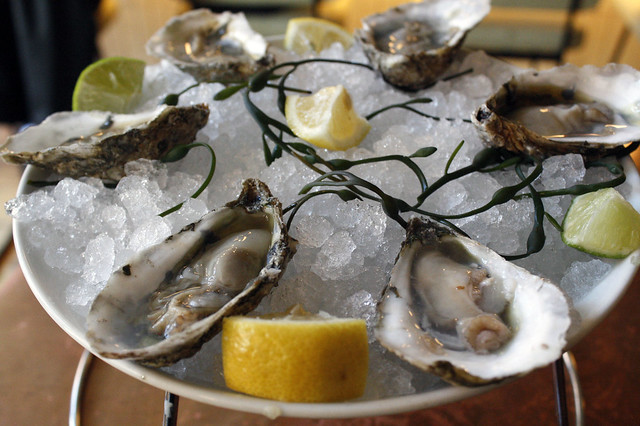 The Blue Duck Salt oysters from the coast of Virginia were served over ice and paired with a classic cocktail sauce, a mignonette sauce made in-house, and a scallion pesto sauce. While the sauces were all very tasty, the oysters were so fresh and flavorful in their own right and really just needed a dash of fresh-squeezed lemon and lime.

We were tempted to just order items from the raw bar for our entire meal, but knew we had to branch out and sample items from the rest of the menu. To balance things out, we decided to split a salad, a breakfast wrap, a sandwich, and a sticky bun for dessert. 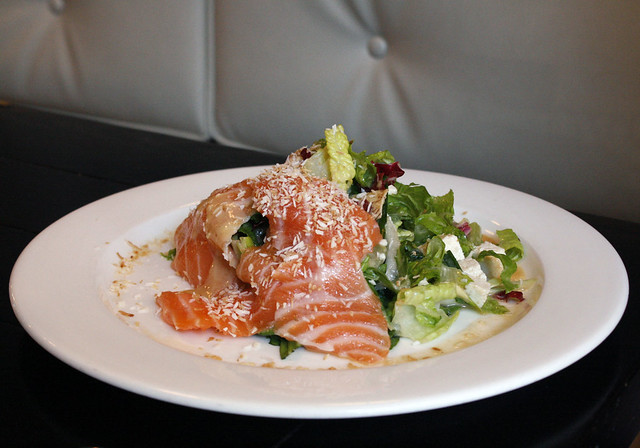 For our salad, we opted to try one with fresh fish and ordered the Salmon Sashimi Salad. The  sashimi was served on top of local mustard greens and bok choy, and tossed with toasted coconut, soft tofu, taro root, and a sesame ginger soy vinaigrette.

I was apprehensive, as I’m not a huge fan of tofu or taro root, but this salad was AMAZING! The sashimi was incredibly fresh and melted in our mouths, while the vinaigrette and bok choy put an Asian twist on your typical salmon salad. We had barely finished this dish before I was already talking about coming back the next weekend simply to order it again. 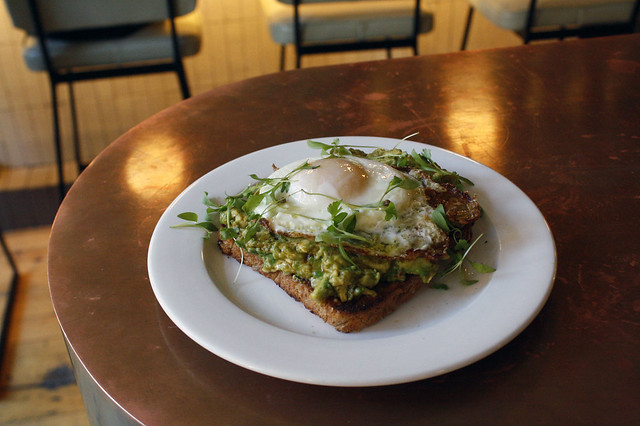 Our (absolutely incredible) server noticed we hadn’t ordered the avocado toast and mentioned we couldn’t come to Crave for brunch and not try it. She ended up treating us to this dish, and I’m so glad she did. The avocado was seasoned just right with salt, pepper, lime juice, and a hint of chili oil to give it a kick.

The thick slice of muli-grain bread was perfectly toasted and didn’t get soggy under the avocado. It was also topped with an egg, which balanced the dish out nicely. There were no frills to this avo toast; it was simple, and sometimes that’s all you need. This is one of the best variations of the classic brunch dish I’ve tried in the city. 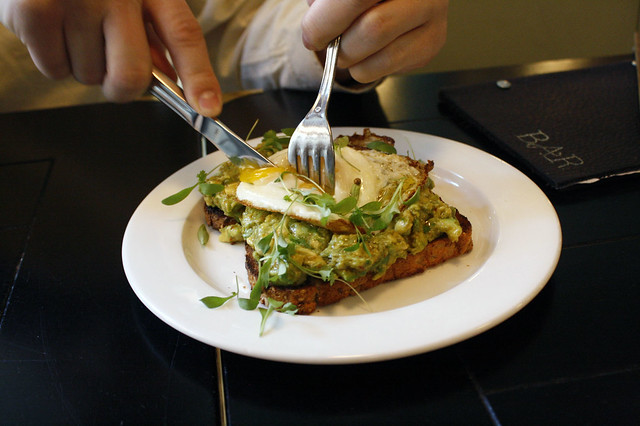 For our main dishes, we shared the Roast Pork Sandwich and the Hangover Wrap. The wrap consisted of fried shrimp and fingerling potatoes, grilled tomato, hummus, tzatsiki, and hot sauce. I was between this and the Fried Fish & Waffles, and our server suggested the Hangover Wrap.

I wish I had gone with the waffles instead. The shrimp were hardly fried and tasted cold. I couldn’t taste any grilled tomato or hummus, and the hot sauce wasn’t very evenly distributed–some bites had way too much, while others had none at all. The tzatziki had massive chunks of cucumbers (I swear I also tasted pickles) which caught me a bit off guard. 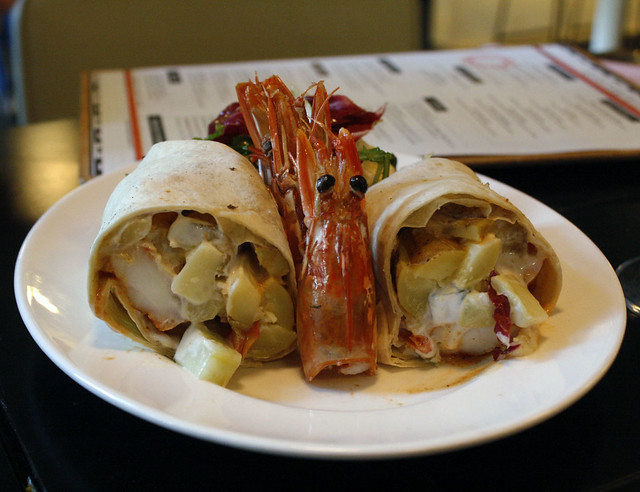 The concept of this dish was very inventive, it was unfortunately just a little poorly executed. The flavors didn’t play well together, and the wrap was missing a crunchy texture. Perhaps if it were served on fresh, flaky French bread, Po Boy style, and the shrimp were warm, it might be a bit better. 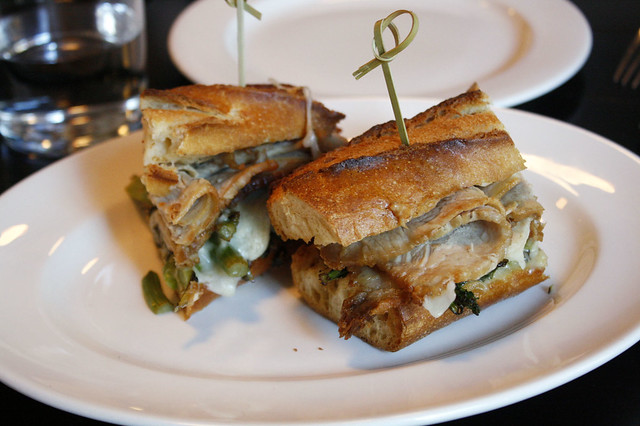 Fields’ Roast Pork Sandwich, on the other hand, was absolutely delicious. The roast pork was topped with broccoli rabe, aged provolone, and lemon dressing and served on a fresh baguette. It seemed to be missing the cherry peppers listed on the menu, but the sandwich was so good we didn’t mind. This more than made up for the disappointment of the Hangover Wrap. 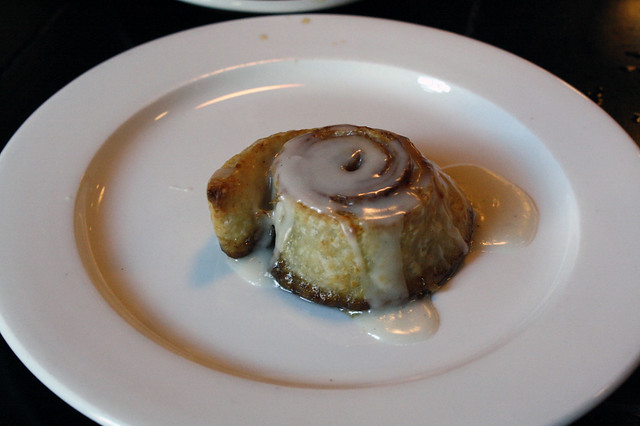 We ended our meal with lattes and the croissant sticky bun. Technically, the sticky bun is listed on the menu as a starter, but trust us when we say it’s amazing no matter when you eat it during your meal. The whiskey vanilla bean icing wasn’t overly sweet, and this was a perfect end to our brunch. 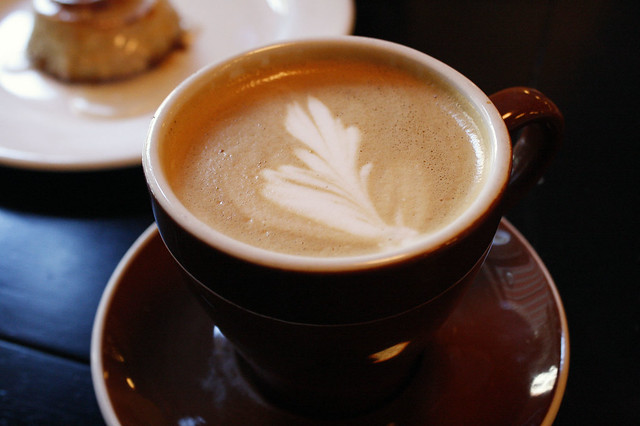 The Bitches say: B+. Crave Fishbar offers a solid brunch with outstanding service where most of the seafood and cocktails really shine through. Don’t sleep on one of the best avocado toasts in the city!

One thought on “Crave Fishbar Brunch”