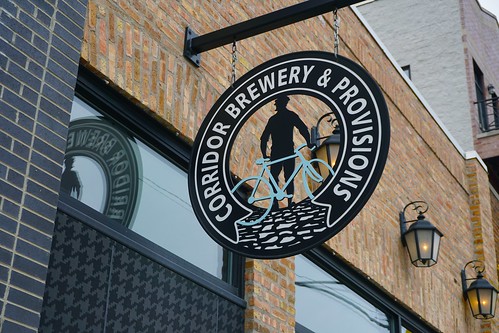 We decided to check out Corridor Brewery & Provisions on Southport. We live in the neighborhood and wanted someplace within walking distance. We had visited the brewery before at night, but this was our first foray into Corridor’s brunch scene. The restaurant doesn’t take reservations, but the host was able to seat us immediately. Large groups might have trouble getting in at peak hours, but since there were only two of us we were able to squeeze in easily.

Corridor has an industrial-kitsch vibe. The gleaming tanks are on display behind the bar, and the walls are covered with a fun and funky wallpaper. There is a large collection of vinyl records on display, and the music is always on point. On Tuesdays, a DJ comes to spin tracks during dinner. The restaurant opened back in 2015, but the constantly changing beer and food menus keep it fresh and fun. 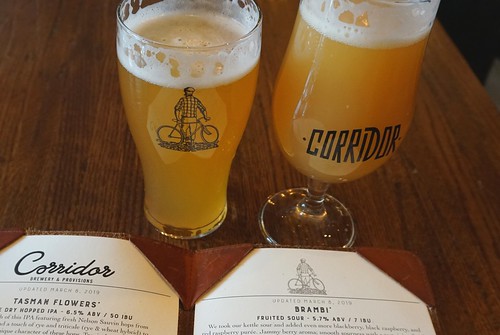 We started by perusing the drink options. Corridor regularly rotates its beer taps, so it is always a new adventure. Current beers are listed on the blackboard in fun and funky scripts, plus they provide helpful descriptions of the beers in the menu.

We ordered the Wizard Fight, an American IPA with citrus notes, and a Tasman Flowers, a double dry hopped IPA. The Wizard Fight is a local favorite and easy to drink – a great brunch brew! It’s the only beer offered year round. If you’re an IPA fan, it’s worth a try. The Tasman Flowers had a sweet pineapple aftertaste, which made it the perfect mimosa replacement. Corridor does offer mimosas if you’re a brunch traditionalist.

My boyfriend had his heart set on the burger, which has thin double steak patties, mustard herbed mayo, pickles, and cheese. If you’re looking for a good burger, you’re in luck. It’s a work of art and the perfect blend of salty, meaty, and cheesy. The burger comes with a side of seasoned steak fries with more herb mayo to dip them in. It’s a hefty brunch serving with plenty of fries to share.

Everything on the menu looked good, but I wanted to fulfill my waffle craving. Corridor offers half orders of their four types of waffles, meaning I could have a savory waffle and a sweet one to finish the meal. I started with a half order of the Croque Madame waffles, served with ham, Gruyere cheese and a fried egg on top of a mini waffle. I’m a big fan of savory waffles and this was one of the better pairings I’ve had. The egg was fried perfectly and the cheese was melt-in-your-mouth delicious. I immediately wished I had ordered a full serving instead of the half. I could have eaten at least four more mini waffles. 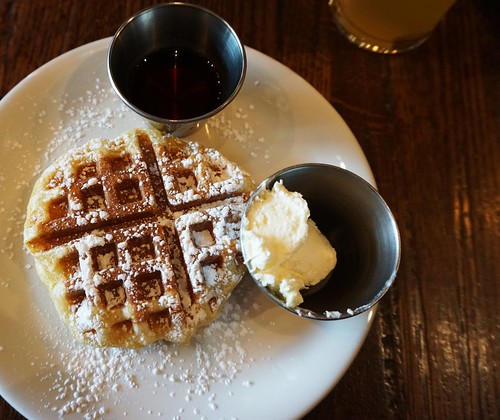 For my sweet waffle, I ordered the classic, which is just what it sounds like. It is a mini waffle with powdered sugar, butter, and a side of maple syrup. Unfortunately, the center of my waffle was still raw, so I didn’t finish it. I stole some of my boyfriend’s fries to round out my meal.

The Bitches say: Three Champagne flutes. The beer is top-notch, but some more attention should be paid to the breakfast foods. If you’re looking for a good burger and mimosa before a Cubs game, this Southport spot is worth a try.