It was one of the many rainy, dreary days we’ve had so far this spring. Seriously, though–can the warm weather just stay for good already?! My boyfriend and I had planned on brunching in the Upper East Side, then spending the rest of day biking through Central Park. But the weather quickly dashed any chance of outdoor activity. We ultimately decided to just head to brunch as planned, and figure out the rest of our day during our meal. 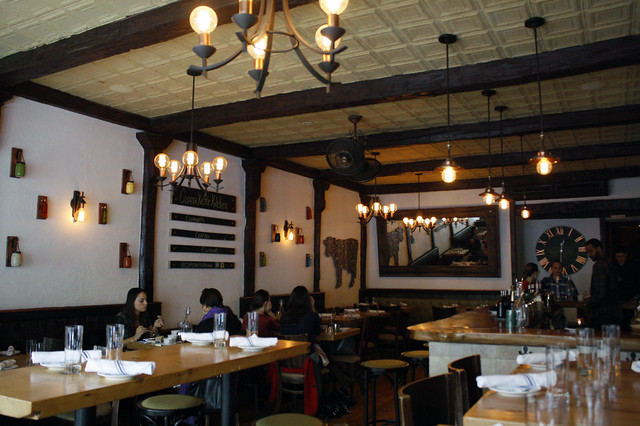 Copper Kettle Kitchen, a farm-to-table American bistro on the Upper East Side specializing in comfort food, had recently invited us in to try their brunch menu. Comfort food sounded like the cure to the rainy day blues I could quickly feel coming on, so I was more than ready to head uptown and see what they had to offer.

I don’t make it to the Upper East Side much; when I do venture that way, it’s usually for a museum, so I’m not as familiar with the restaurant scene in that area. I was picturing a small, cramped space, squeezed in a row of other packed and narrow eateries. But Copper Kettle Kitchen is actually quite spacious. 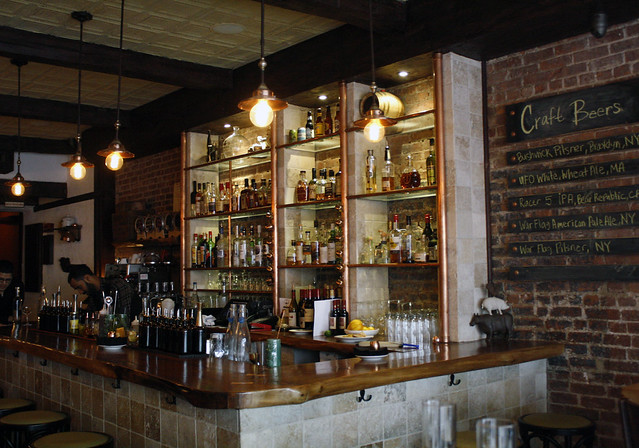 While one wall is made with solid brick, the other walls are lined with rustic wooden beams connected to the vintage tiled ceiling. The restaurant lives up to its name, with various copper accents hiding throughout the space. It has a very rustic, yet comfortable and homey vibe. I could see myself spending a few hours at the bar, topped with what looked to be handmade polished wood counter, chatting with my local bartender about the latest beers they have on draft.

Speaking of drinks, the beau is a big craft cocktail aficionado. So once we were seated and he saw the Rise & Shine on the menu, he knew he had to have it. Copper Kettle Kitchen’s version of a Morning Glory, this cocktail is made up of Elijah Craig bourbon, a squeeze of both lemon and lime, and absinthe. It’s topped off with an egg white foam and a dash of bitters. 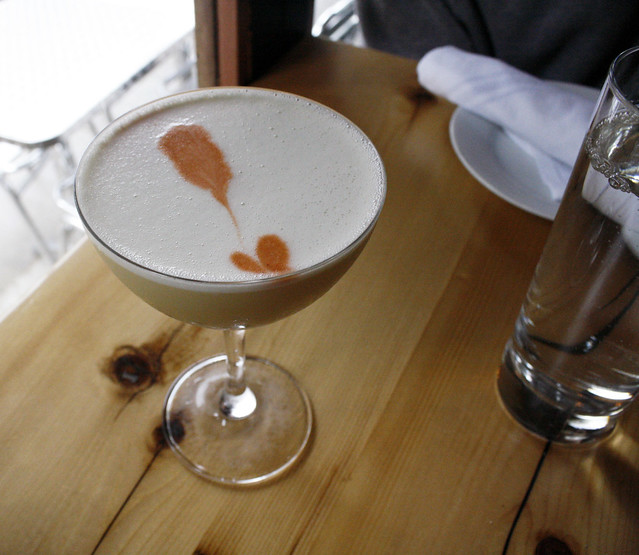 While it was definitely tasty and obviously handcrafted, it was a bit too strong for my taste–I prefer to save my bourbon for after 5 p.m. Fields mentioned that he enjoyed the addition of the absinthe, but it was borderline overboard. Had there been any more absinthe in the cocktail, it would have been too strong for his liking as well.

I went my usual route and started with a Copper Mary. It was your typical Bloody Mary mix; vodka, tomato juice, horseradish, Worcestershire, pepper, and Tabasco. But it had an interesting addition–a habanero shrub. 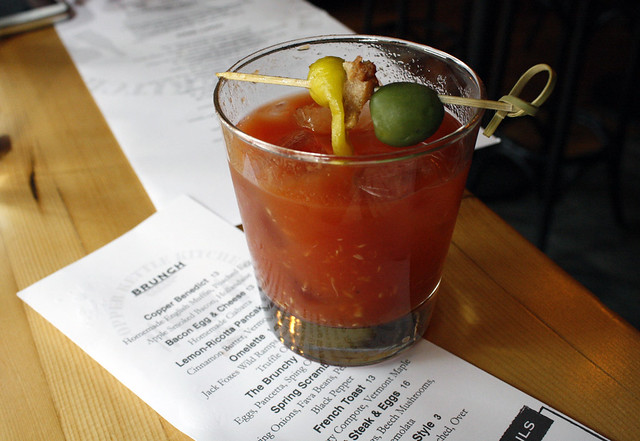 I had heard of the big shrub cocktail craze slowly making its way around, but wasn’t very familiar with what exactly shrub cocktails were. Our server explained a shrub is comparable to an extract. So essentially, my Bloody Mary was topped off with a habanero extract.

I loved the kick the habanero shrub and Tabasco provided, and the freshly shaved horseradish and Worcestershire really rounded out this cocktail. All in all, a solid Bloody!

To be honest, all of Copper Kettle Kitchen’s brunch offerings sounded amazing. The table next to us had ordered the brunchy flat, a flatbread topped with gruyere cheese, pancetta, scallions, and a sunny-side-up egg. I had been eyeing it ever since we arrived. But I always end up underwhelmed with breakfast pizzas, so I decided to go with the breakfast sandwich instead. 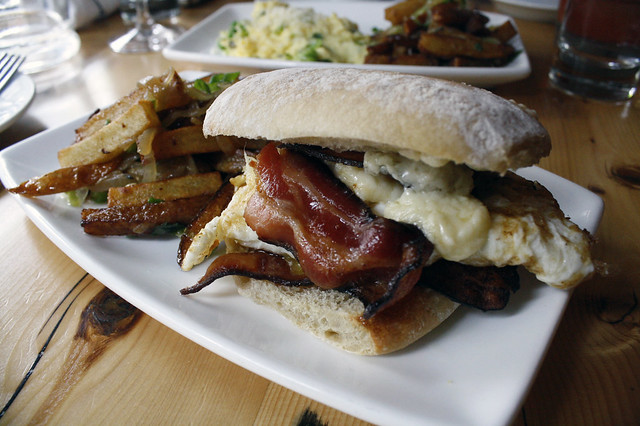 Sandwiched in between two slices of fresh ciabatta, it was stuffed with strips of perfectly cooked bacon, a fried egg, and melted white cheddar cheese. The sharpness of the cheddar was a nice contrast to the saltiness of the bacon, but the sandwich as a whole was a little dry. A chipotle mayo or a garlic aioli would have been a great addition to this almost-perfect dish.

I was really surprised when Fields ordered the spring scramble, which was a meatless dish. He is as carnivorous as they come, so the fact that he ordered a veggie-based scramble caught me off guard. I was worried he wouldn’t be happy with his choice, but these eggs were packed with flavor and did not disappoint. 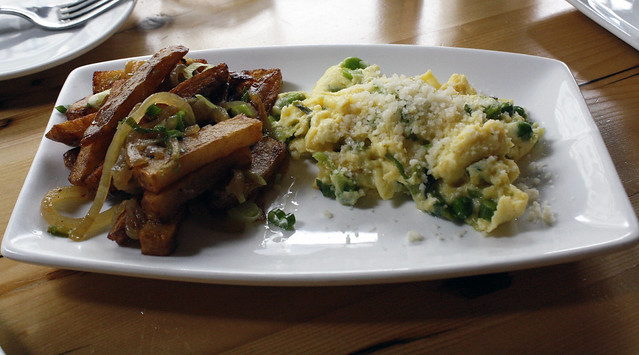 They were served softly scrambled, mixed with diced spring onions and peas, and topped with fresh Parmesan cheese. It reminded us both of a carbonara dish, but with eggs instead of pasta and minus the pancetta. I’m already planning on making another trip to Copper Kettle Kitchen, just to taste this dish for a second time–and to try the brunchy flat that I missed out on the first go around. 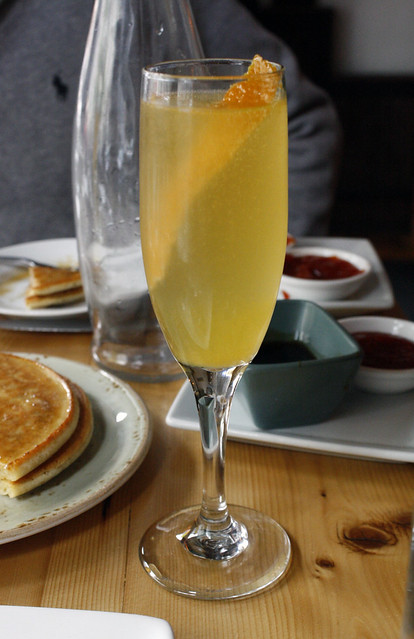 While we were both fairly full, our eyes were bigger than our stomachs at the beginning of our meal, and we had also placed an order for the lemon ricotta pancakes to share. While we were waiting for them to arrive, I polished off my bevvie and decided I wanted to try a different cocktail.

I went with the More Mosa, which was prosecco, orange juice, and a splash of cranberry compote. It was a touch more tart than your average mimosa, which I appreciated as I don’t like really sweet cocktails. I could have easily ordered a few more rounds, but we had a long day ahead of us–and a big pile of pancakes to taste! 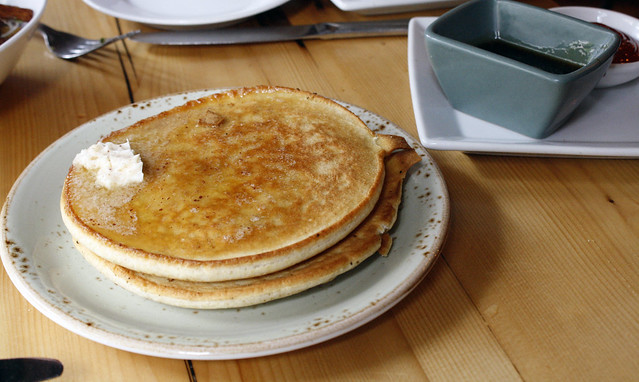 The lemon ricotta pancakes arrived on a ceramic teal plate, still warm, and were topped with a fall spiced butter and served with Vermont maple syrup on the side. They were the perfect size, and had a dense consistency as a result of the ricotta.

The spiced butter definitely helped make the pancakes memorable. It tasted as though nutmeg or cardamom had been whipped with the butter. The authentic Vermont maple syrup didn’t hurt, either. I found myself having “just one more bite” of these pancakes more than once. 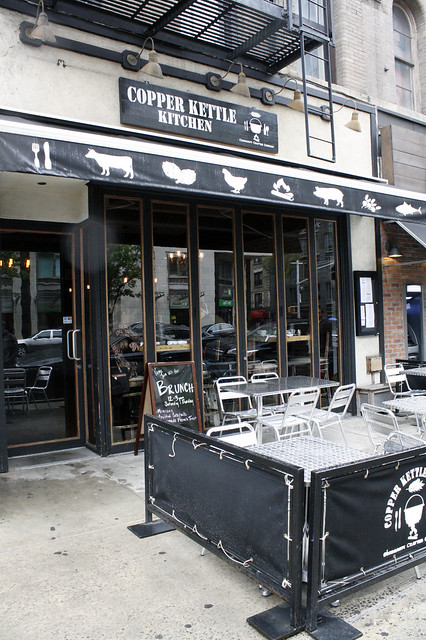 The Bitches say: B+. For a solid comfort food brunch option that puts its own unique spin on classic dishes in a cozy, rustic atmosphere, head to Copper Kettle Kitchen.