Work trips can be tiresome, but when you’re visiting a city you love, and have friends there who you rarely get to see, that makes the layovers, delays, and exhaustion worth it.

When I first decided to move away from the D.C. area, I was debating between Chicago and Dallas. Ultimately, we all know which city I ended up in, but Dallas will always be a favorite of mine. Perhaps it’s the cowboy boots, or the endless margaritas, but needless to say, it’s great.

This particular weekend I was visiting happened to be the weekend that Dallas was celebrating St. Patrick’s Day—lucky me! One of my best friends from high school, Stephanie, invited me out to brunch with her friends. It was a big group brunching, and thankfully, all of them were up for me taking pictures of their food and asking them for their opinions of their dishes.

The group decided to go to Cook Hall, a small restaurant downtown and attached to the W Hotel. Since I am not that familiar with Dallas, I was happy to go along for the ride. 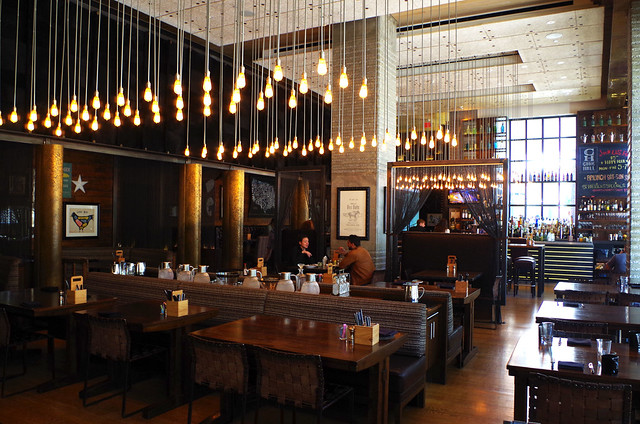 Cook Hall was a beautiful space with modern, rustic elements throughout. I especially liked the wall of glass, that was shielded with wooden slats that were open ever so slightly to allow natural sunlight in, without letting in too much heat from the persistent sunshine.

There were nine of us total at this brunch, so it was quite the party! I love meeting new people, and made swift friends with everyone.

When it came to drinks, we all knew the party needed to get started soon because the St. Patty’s day celebration was about to begin. But first, I needed coffee. 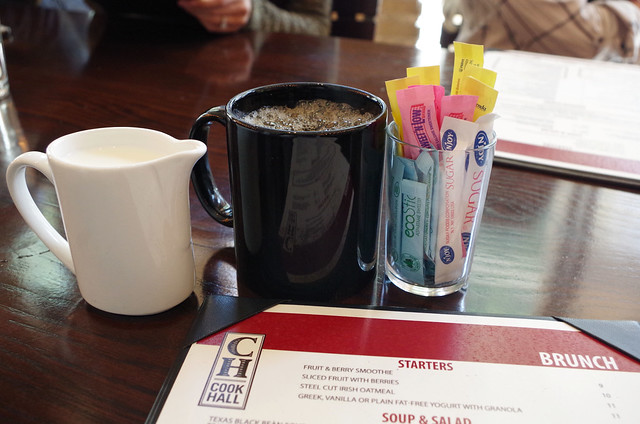 The coffee was a bold blend, and came with cream and sugar. Stephanie and I are coffee fiends, so it was the perfect “wake-up” cup we needed before delving into cocktails. 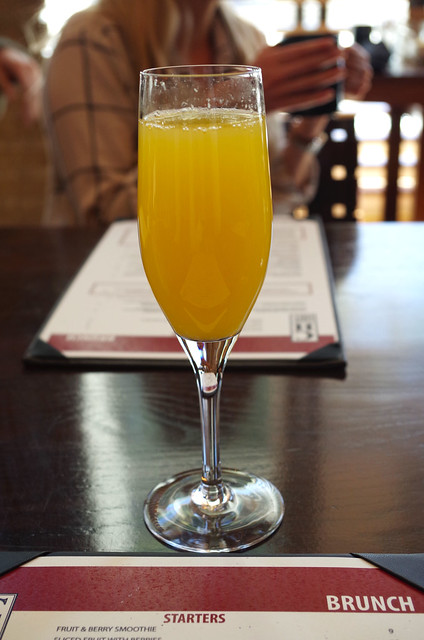 For my libation, I went with a mimosa, while most of the group went with the Bloody Marys. I loved my mimosa. It was a great, refreshing mix of orange juice and champagne. The Bloody Marys were spicy, with minimal baubles and adornments, but let’s be honest, what everyone really cared about was the mix, which was met with approval. 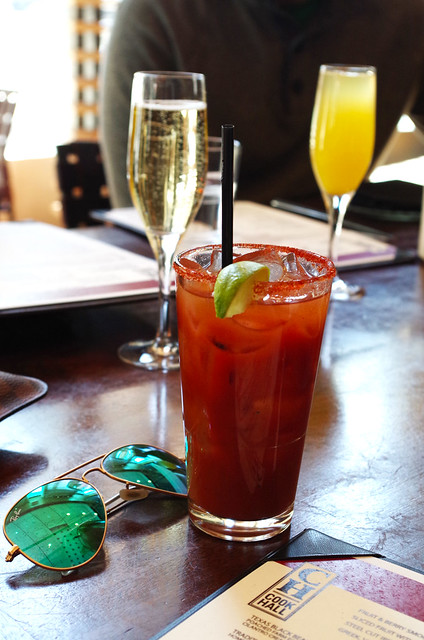 Between introducing myself, and making new friends, we all ordered our entrees, and surprisingly, we all got a good mix of entrees. 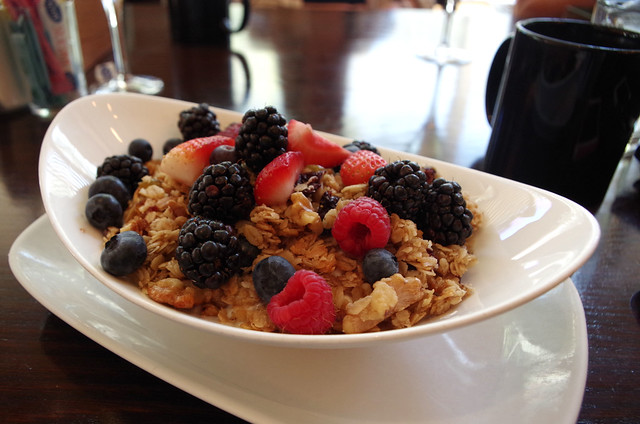 My ever the health nut friend, Stephanie, went for the granola with blueberries, raspberries, strawberries, and blackberries. Stephanie has always been a healthy person, so this entree wasn’t a surprise to me in the least. The dish was a great mix of berries and granola. It was also a large portion, but she did say at least she wasn’t left hungry, as granola can sometimes be that way. 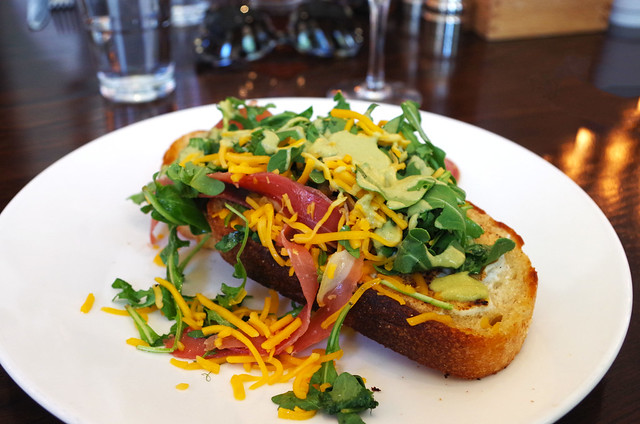 The other Stephanie of the group decided on the Eggs in a Nest entree, which was eggs on a thick slice of sourdough toast, with arugula, cheddar cheese, and ham. Stephanie really liked it saying that the arugula made it feel not as heavy, and that the eggs were fresh and perfectly cooked. 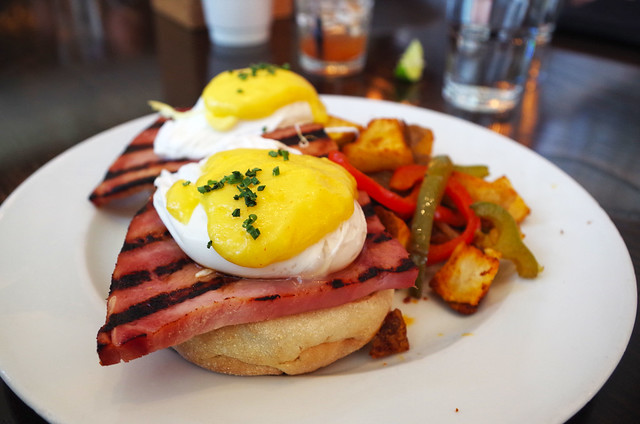 The other Stephanie’s other half, Kyle, went for the eggs Benedict. It was your standard eggs Benedict with country ham, poached eggs, and smothered in Hollandaise. Kyle noted that the Hollandaise was more tart than what he normally is used to, but he enjoyed the dish from top to bottom. The breakfast potatoes were also delicious and perfectly seasoned. 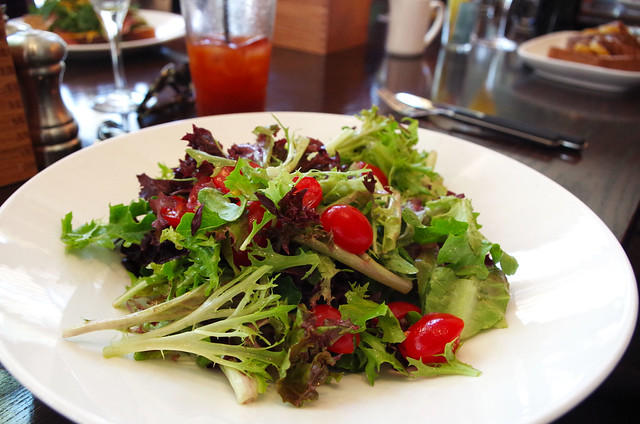 Morgan definitely decided to go outside the brunch box, and ordered a mixed greens salad. It was a light dish with tomatoes, varieties of lettuce, and a light vinaigrette—no protein, no pizzazz, just a salad. While Morgan loved it saying the dish was fresh, and exactly what he wanted, we jokingly chided him for being the healthiest one at brunch. 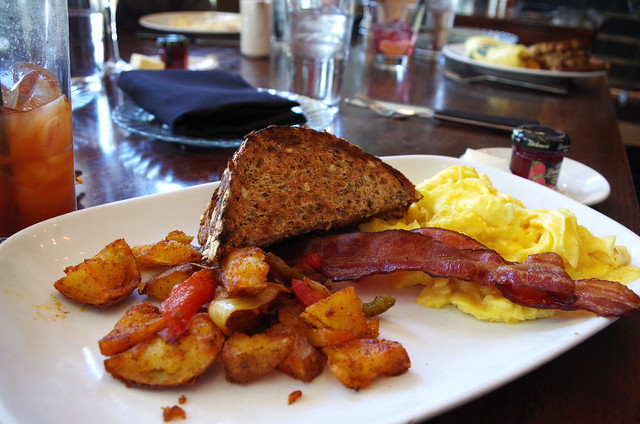 Katherine and Virginia went for the American breakfast, which was eggs, potatoes, your choice of ham, bacon, or sausage, and toast. While the two of them liked the potatoes, they did say that it was a mediocre dish since it was really a basic breakfast entree. Neither of them loved it or hated it, it was just kind of lackluster and not worth ordering again. 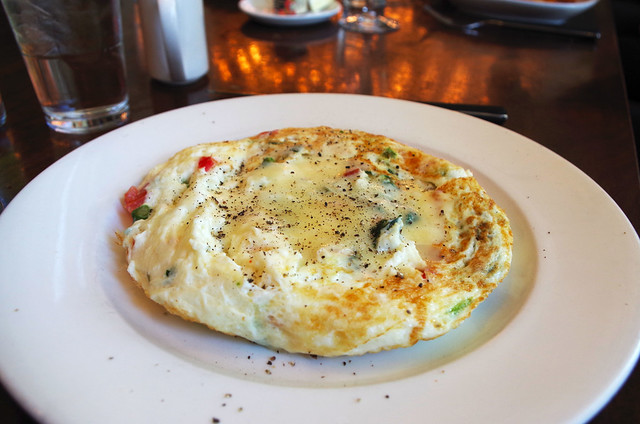 Champ decided to order the egg white vegetable frittata, another healthy brunch option. The frittata had egg whites, spinach, asparagus, tomato, roasted peppers, and Gruyere cheese. Champ commented that it was filling, healthy, and satisfying. It looked delicious, and with all the veggies it was stuffed with, it certainly looked like a filling, healthy dish. 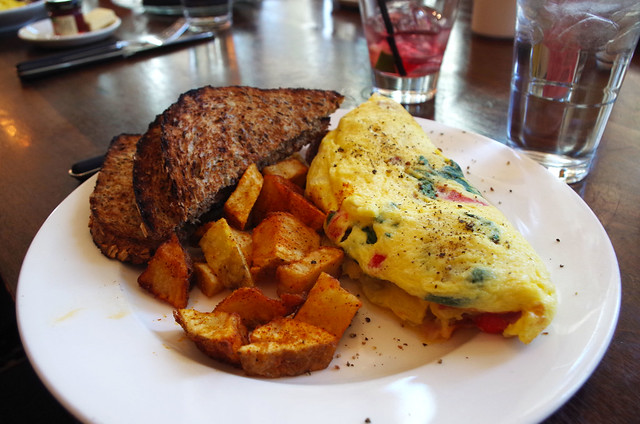 Keeping on the egg train, Jerelle decided to go with the build-your-own-omelette and chose three eggs with spinach, onion, and sauteed peppers. Jerelle enjoyed the omelette, however he noted that he felt his breakfast potatoes were over seasoned and a bit dry. 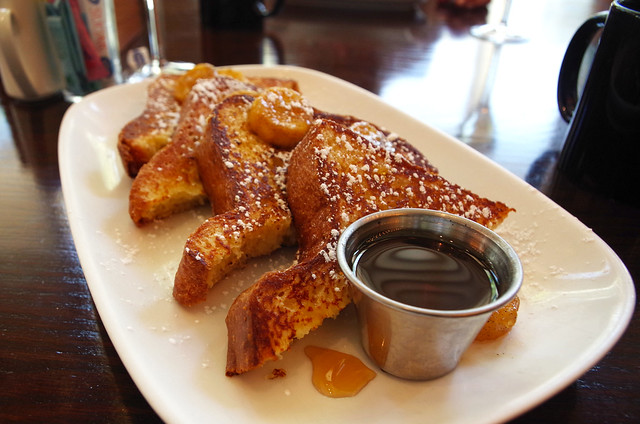 I decided to follow my sweet tooth craving and go with the vanilla French toast. The second the dish was delivered, everyone turned and looked on with envy—the presentation was not only pretty, but the vanilla and banana aroma was delightful. I even more so loved the Brioche bread, and how moist the bread was—it almost tasted like cake! I would get this dish again, and again, and again!

Cook Hall was a great place to go for brunch with a big group. It was open, rustic, and has a great menu for everyone to enjoy. While some of the dishes are pretty basic, the vanilla French toast, and Eggs in a Nest were standouts, and definitely worth trying.

The Bitches say: B+. Cook Hall is a great choice for brunch with a big group and has some great brunch options. The drinks, vanilla French toast, and Eggs in a Nest were delicious, so definitely try those when you go!