A winery, restaurant, bar, and concert venue all under one roof? City Winery has an impressive resume and after experiencing brunch, I am wondering if there is anything they can’t pull off. 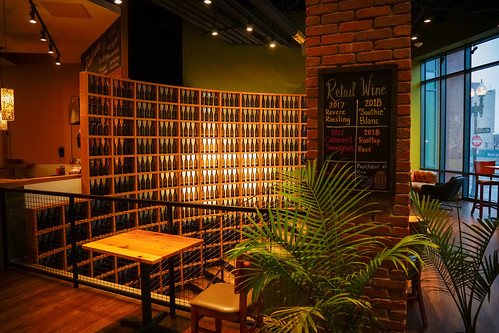 Upon entering City Winery on a rainy Sunday morning with my friend Cat, I was greeted by the hostess and was informed that there would be a live band that morning and every Sunday morning during brunch. It was still early, so they hadn’t started jammin’ yet, but our table had the perfect view. 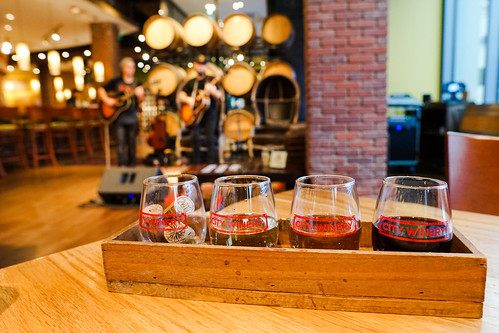 It is a crime to enjoy a meal at at a winery and not order wine… so we started with a flight! I wanted a nice variety, so I went with the classic CW flight. It included Sonoma Mountain Chardonnay, Rooftop Rosé and Willamette Valley Pinot Noir. Being able to enjoy a selection of  white, rosé, and red at the same time was the perfect taste of what City Winery is known for. 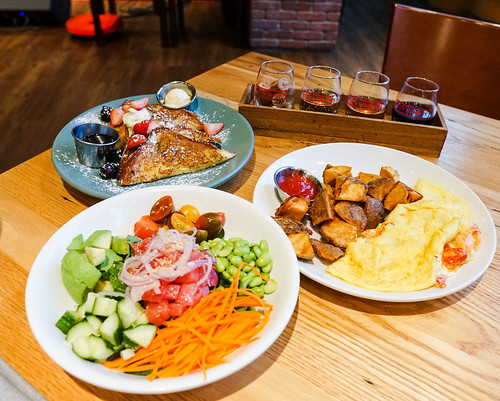 For food options, there is a wide variety of savory, sweet, and healthy choices. They also have options for those who are vegan and/or gluten-free. I had a hard time deciding what to order. I was stuck between the poke bowl, the burrata, and the avocado toast. They were all technically starters, but I was in the mood for something on the lighter side… until I caved and decided I also needed the brioche French toast. I knew the burrata would be quick so that would hold us over until out meals were prepared. I went with the poke bowl, and Cat ordered the Maine lobster brie omelet. We both agreed to share the French toast as an extra. Yes, a lot of food… but we were being entertained with some wonderful live music so we planned to spend a couple of hours there. 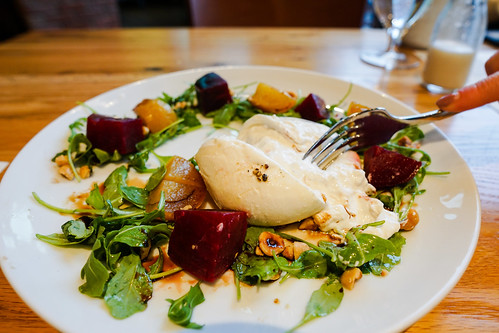 Served with chunks of roasted beets, watercress and a balsamic reduction. The burrata was large enough for four to share. Cat and I both agreed that this starter would have packed more of a punch if it was served with pieces of toasted ciabatta. But with the volume of food we had coming, the ball of cheese was delightful on its own. 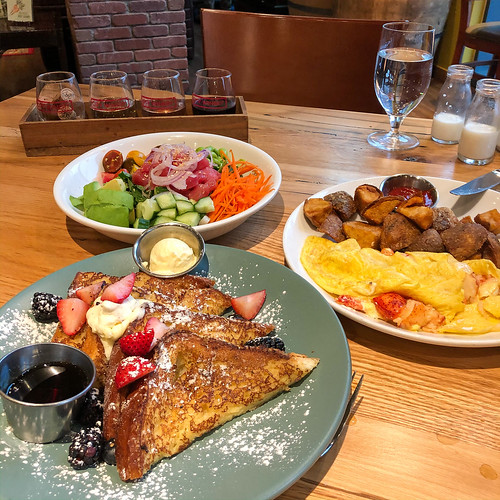 The lobster omelet was served with exceptionally large pieces of lobster and a touch of brie. On the side, there were adobo potatoes and some greens. I was shocked by the serving of lobster that was included in this dish, and would recommend this for anyone who would like a taste of New England first thing in the morning. 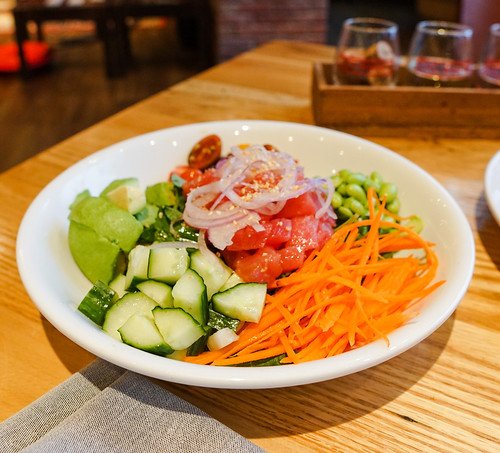 The poke bowl was a perfect option for a lighter dish with plenty of macronutrients. Raw tuna, quinoa, kale, carrot, cucumber, avocado, red onion, and a sesame ginger vinaigrette in a bowl. The dressing was light, but I felt like I was giving my body some love by eating so many greens before 11! I would have loved to add some soy sauce to this bowl, but it is the perfect option if you are looking for something light or plan on devouring some French toast after. 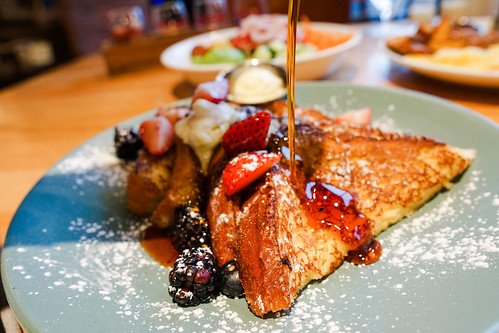 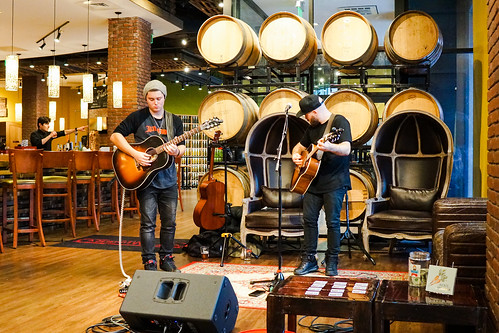 The best part of this entire meal was the live music that was performed right in front of our table. The musician Alex2e performed his original music and a variety of covers. The crowd was a mix of couples, friends, and a couple of larger groups. Everyone was lively and the aroma of fermenting grapes did not waiver. When the waitress brought over the dessert menu, I thought I could not possibly have another bite of food. But when the live music started playing after a break, Cat and I looked at each other and I knew we were mentally agreeing on another round. 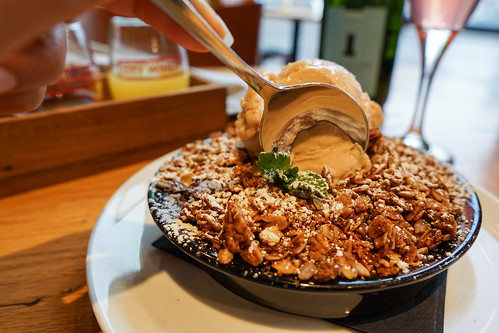 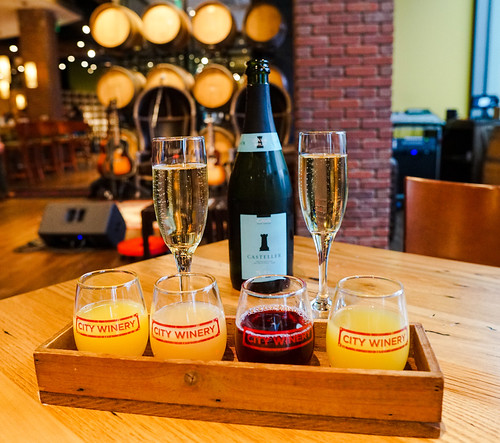 We ordered a pop fizz brunch (make your own mimosa) and the gluten free apple crisp. I was thrilled that this dessert was served with a scoop of vanilla ice-cream. The granola on top of the warm, cinnamon-coated apple chunks was the perfect touch after a couple of hours at City Winery. The full bottle of champagne arrived with a cranberry, orange, grapefruit, and passionfruit juice. I added a dash of cranberry and grapefruit to my first glass and tested out a couple other combinations. 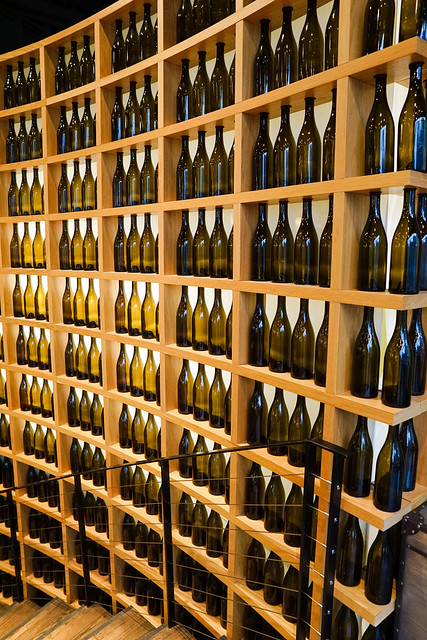 I would highly recommend visiting for brunch, a concert, or a wine tasting at City Winery’s Boston location. I was shocked after taking a quick tour of the facility to learn that not only does this location produce their own wine, it is also a location for concerts, private parties, weddings, wine storage, and more. 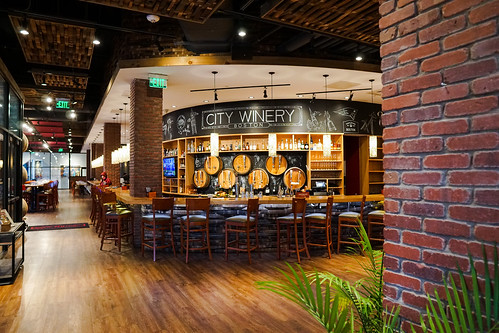