Though Ciao, Gloria just opened on October 1st, this café and bakery at the northernmost edge of Prospect Heights already has regulars. As I waited to order, the man in front of me greeted owner Renato Poliafito (formerly of Baked in Red Hook) by name. Renato chose the name Gloria partly for Gloria Vanderbilt (the café sits on Vanderbilt Ave.) and partly because he’s just always loved it. The “Ciao,” which is Italian for hello and goodbye, is a nod to Renato moving on from Baked toward a new adventure. We enjoyed breakfast there courtesy of Renato. After speaking with him in bits and pieces as he prepped for a morning crowd, it became clear that everything about the restaurant – from decor to menu to coffee – was chosen with the same level of care. If there’s one word I would use to describe this spot, it’s thoughtful. 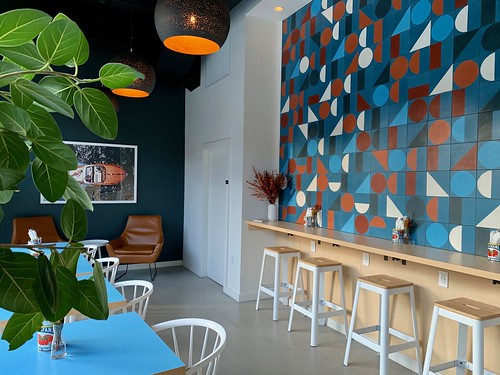 The space itself is small, though not overly-crowded. The decor is minimalist, but complemented by brightly patterned tiles along one accent wall and bright blue table tops. It all follows the lead of a vintage photo Renato had blown up for the back wall (and the café’s website). At one point I got up to get a water and found Renato arranging vases of small flowers to decorate each table. But my favorite touch? The Sclafani tomato cans used as napkin/cutlery holders on each table. 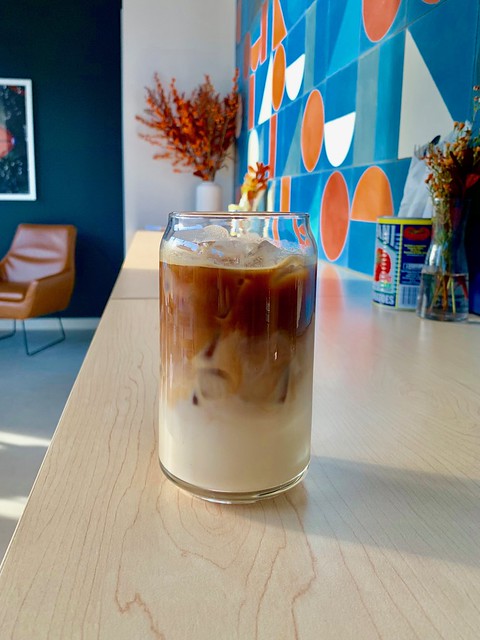 At Ciao, Gloria, you order at the counter and get a number. To the surprise of no one, I began by ordering a freshly squeezed orange juice. Sadly, they were out, but Renato offered up grapefruit instead (a bit bitter for my taste, but that’s grapefruit for you). I would soon learn that a lot of Gloria’s offerings are seasonal and subject to change. My roommate/brunch date Marisa ordered an iced latte and was pleased to have more than one dairy-free milk option (they carry oat and almond milks). Ciao, Gloria brews Verve coffee, which is based in Santa Cruz but was discovered by Renato on a trip to Tokyo. The roast was full bodied and not too bitter. We both loved it. One downside: as it’s a café, Ciao, Gloria doesn’t serve alcohol. 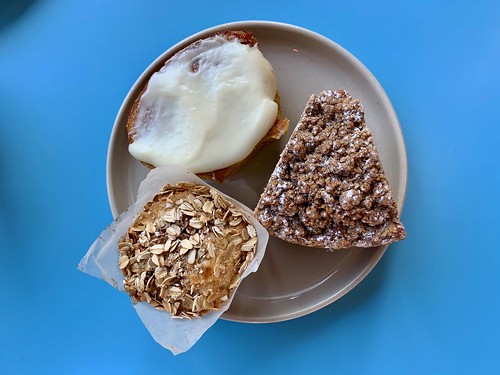 Renato then delivered us a sampler of their most popular baked goods, including a pumpkin cinnamon roll we requested after overhearing that they were fresh out of the oven. Though I was prepared to love the cinnamon roll best, I found the pumpkin a bit too aromatic. That said, the icing was excellent, and as they say on “The Great British Bake Off,” the cake wasn’t too stodgy. The “coffee” coffee cake is Gloria’s take on a crumb cake, but with an espresso swirl in the batter. It was a subtle but successful flavor profile on a classic coffee accompaniment. The slice was also enormous and definitely enough to share with your date. However, both Marisa and I agreed the jam muffin was our favorite pastry. You won’t be surprised to hear the jam is both homemade and seasonal. We tried the last of the plum, paired with a mild citrus cake that was light and moist with a sweet oat topping with sugar crystals. If you like lemon poppyseed muffins, this is better. 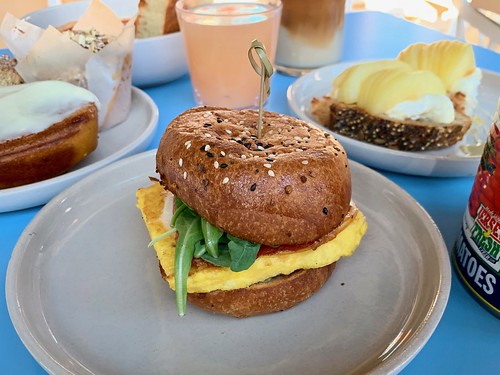 Ciao, Gloria has separate breakfast and lunch menus. Marisa and I dined early, so they weren’t yet serving lunch, but offerings on the lunch menu include a grain bowl, frittata, autumn green salad, and a host of Italian sandwiches. In addition to the classic bacon egg and cheese, Ciao, Gloria serves a PEC – prosciutto egg and cheese with arugula and a pesto/bomba Calabrese aioli. Honestly, this aioli was a game changer… and I don’t even like pesto! The PEC is served on a homemade brioche bun with a sweetness that really balanced the salty, crispy prosciutto perfectly. If you’re vegetarian, they also serve an AVEC (avocado egg and cheese) with its own special sauce. 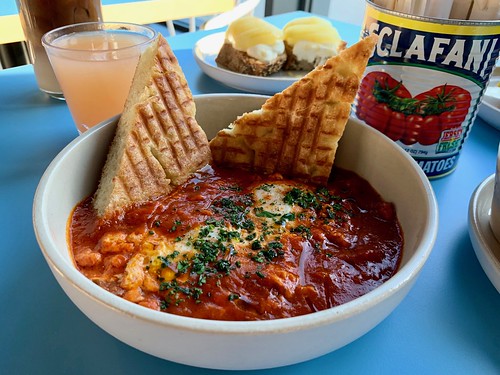 As I am a shakshuka enthusiast, we had to try the “eggs in purgatory,” served with grilled focaccia. This is a hearty meal; the stew is thick and well-seasoned but not too spicy (just a hint of a kick once you’re a few bites in), the eggs the right amount of runny, and two pieces of focaccia were not enough. The bread is homemade and it was the best thing on the table. A mother and daughter at the table next to us even asked about it. 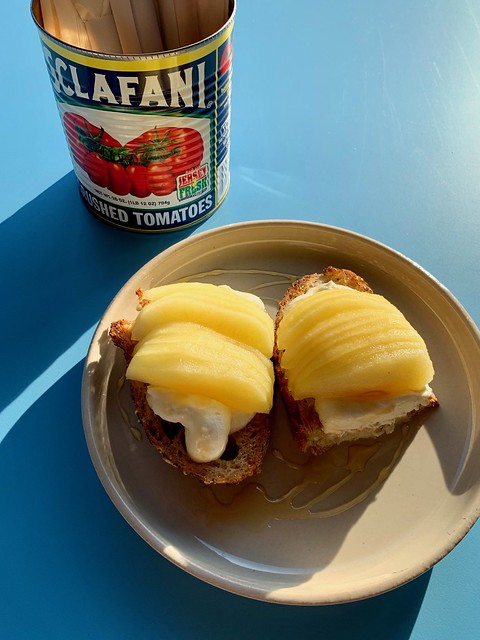 After two savory entrees, Marisa and I balanced our meal with the sweet ricotta toast. The dish comes with homemade ricotta, poached apples (again, seasonal), and a honey drizzle. The ricotta was smooth and creamy, which was a great contrast to the crunchy sourdough bread. I tried to eat it with a knife and fork at first but this proved futile. That was fine though; since the fruit is poached, nothing went flying after you bit into it! Though this might have been the simplest thing on the table, it was definitely my favorite. They also serve a salty ricotta toast with herbs and a ricotta salata that is equally popular. 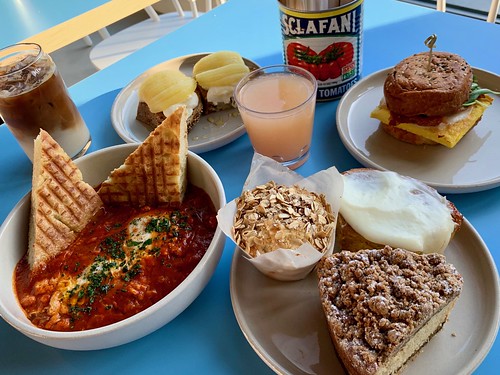 Ciao, Gloria may seem causal, but the food is anything but.

At a glance, Ciao, Gloria seems more like a quick coffee stop than a sit-down restaurant, but skipping the food would be a mistake.
Ciao, Gloria serves brunch Monday-Sunday, from 8 a.m. to 4 p.m.