Goat yoga has been cropping up all over my social media for about three years now. From viral videos on Facebook to friends traveling to the mountains of Virginia to partake in this trend. It started in 2016 in a barn and has made its way across the U.S.

So why is this such a big thing?

Goats are gentle, smart, soft animals that love to climb. They’re the perfect yoga companion because they can’t bite, can massage your back with their hooves, and are pretty stinking cute. 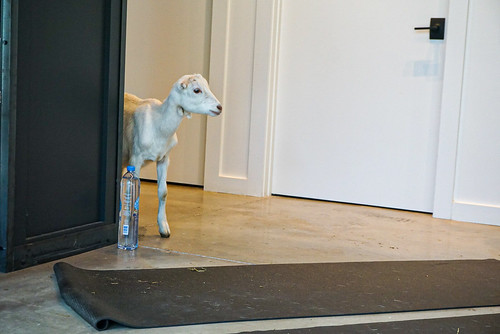 GOAT Climb and Cryo has started offering indoor goat yoga at $55 for an hour. They invited me and a friend in for a complimentary class to see if we goat what it takes. 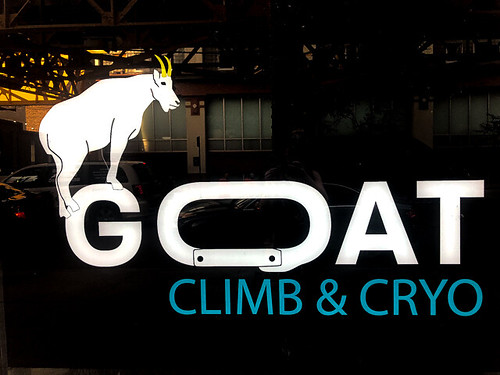 GOAT versa climbing class was one of the hardest workouts I’ve done, so I was excited to see how goat yoga would compare. Would this class change my yoga practice or just be baaaaa-d?

First, I was a big fan of not having to leave the city or go into a barn for goat yoga. It’s now officially cold in Chicago and indoor heat during a workout is a major plus. As is running water to shower off after. Goat Climb and Cryo hosts the yoga classes in the legends lounge. They put out a circle of yoga mats, surrounding a pile of hay. A handful of goats grazed and lazily explored the room while everyone got set up. 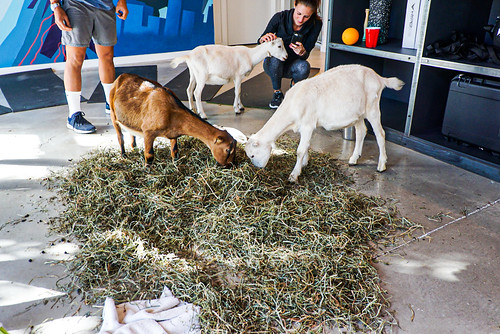 There was lots of poop– which, while ewe is also expected when dealing with animals. So decide beforehand if it is worse to get your feet dirty or your socks ruined before going. I went barefoot and just watched where I stepped. It’s probably best to wear your b-list workout clothes since the goats like to take a nibble, and in one unfortunate classmates case, a leak while on her back. 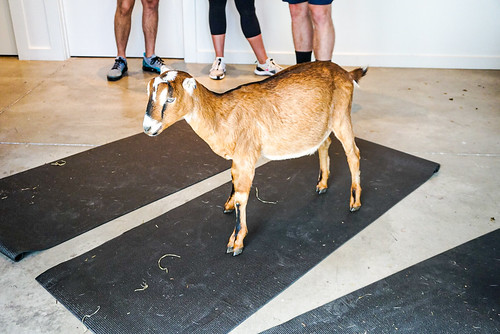 Our workout started with the class forming a tight circle and learning how to pick up the goats, and pass them in a circle. We had baby goats, not yet six months, and while they’re large, they’re surprisingly hollow and light. We learned proper holding techniques and took a break for photo ops.

The instructor and goat farmer called for phones down and to stop kidding around. She told us a little bit about her goats before leading us through a series of stretches that could not quite be called yoga, which was fine with me because I was largely there for the goats. 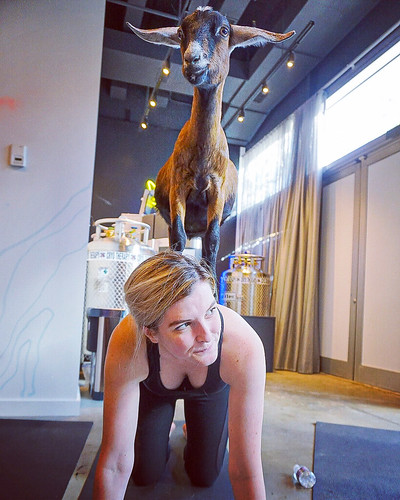 After 10 or so minutes stretching, it was time for the goats to climb on our back and complete my Instagram bucket list. We paired up in groups of three, where we’d take turns as goat-lifter, cameraman and tabletop. Prepare to be quick on the pictures, because sometimes the goats decide they’re not interested in standing up there and hop down. Other goats were happy on their perch and had no interest in moving. 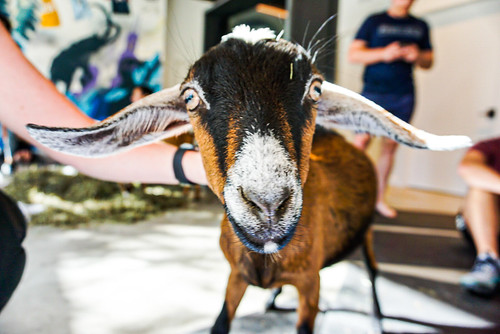 If you go with a friend, you’re able to have the goat straddle you both for a cuter, more complex pose. But in general, it was all pretty basic poses. You won’t need extreme flexibility or skills for this class, but you’ve still goat to go.

The Bitches Say: One Sweat Drop

You’re not going to get a workout in during goat yoga, except perhaps an ab workout from laughing. This is a glorified petting zoo, leaving you with memories and amazing photos but no new muscle tone.