If you speak to any New Yorker, they’ve likely at least heard of Catch if they haven’t been. The seafood hotpot has been a bustling staple just shy of a decade. It’s not just about their food and drinks though; it’s quite the place for nightlife and spotting celebs. The multi-level restaurant has four floors including a rooftop for dining. 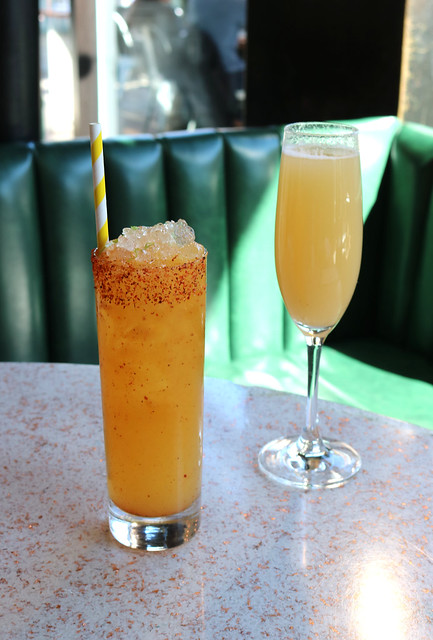 We were promptly seated on the fourth floor at a prime table near the window. Cocktails were clearly in order. After recovering from a bad date, I just wanted something comforting like a Bellini, which was made just right. My brunch date Tasha was feeling more adventurous and tried the mango haze. She was raving about the spicy cocktail. The golden cocktail was prepared with mezcal, mango, and lime and garnished with spicy Tajin.


The brunch menu is impressive, spanning a range of options split into various categories. There’s a raw bar, cold selection, hot entrées, sweets, eggs, grains and greens, and breads and spreads. Even as a vegetarian, I felt I had options. Catch has an à la carte brunch menu, and you also have the option to opt for the $85 prix fixe special for two. The prix fixe brunch comes with a bottle of Champagne with your choice of a shared starter, two entrées, a side, and dessert for the table. The brunch deal is a good one, however the options are limited. The full brunch menu had some items we were looking to try so we ordered à la carte. 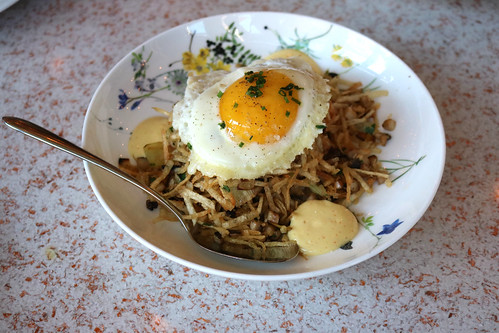 We started with sharing a crispy potato hash. It was stunning and so satisfying. The potato hash was lightly seasoned and had garlic aioli. We didn’t care for the egg on top but loved the crispy potato. 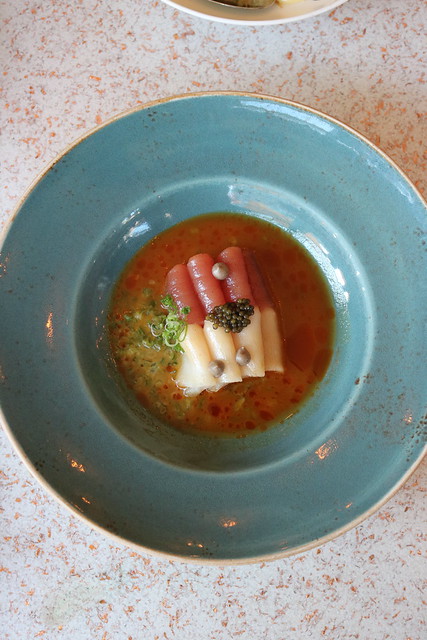 I relied on my brunch date to test out the seafood offerings. She was torn between several options but ultimately went with our kind server’s recommendation. The truffle sashimi might not look like much when you first see it, but upon your first bite you will realize that it is in fact heaven. She couldn’t get enough of the black truffle purée and chili ponzu that the sashimi is served with. The sashimi consists of tuna and hamachi topped with caviar.

I had originally hoped to order the shakshuka. Unfortunately they weren’t able to make it sans turkey sausage and warned me of some cross contamination in preparation of the dish. I thoroughly appreciated our server informing me, especially as I do follow a vegetarian diet. 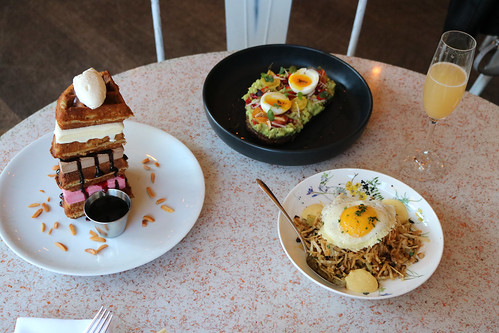 Avocado toast it was. Our server also disclosed this typically has fish sauce mixed in, however the kitchen would be able to accommodate. The smashed avocado toast was vibrant and dressed to the nines. The sourdough toast had some picked chili peppers, heirloom tomatoes, radishes, pomegranate, almond shavings and a gorgeous egg. I was most excited about how this wasn’t too crispy and actually easy to eat. The chili peppers and tomatoes on top really made this so fresh and filling. 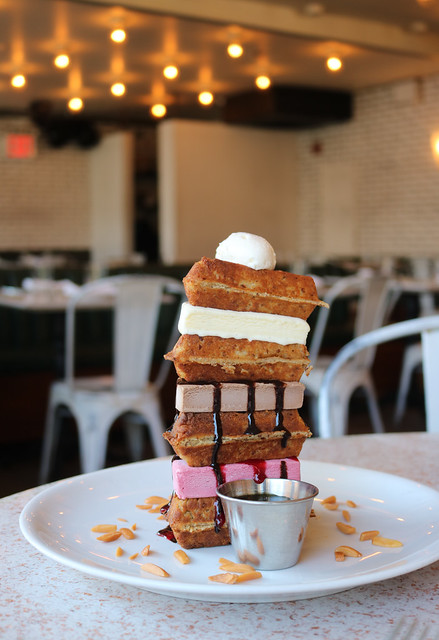 At this point, our anytime waffle tower was beginning to topple over from being out for so long. We recommend ordering this closer to the end of your meal if you’re sharing as a dessert. The waffle tower consists of various flavored waffles layered with chocolate and raspberry ice cream. If that’s not enough, the sexy tower is drizzled with chocolate ganache and raspberry jam. The waffles and ice cream together were out of this world. These might have been some of the best waffles I’ve ever had, and that’s saying something as a brunch blogger. We were pleased to see this wasn’t a gimmicky dessert made for the gram, but really a dish worth indulging in if you visit.

Catch brunch checks all of the boxes when it comes to food, ambiance, and hospitality. We truly enjoyed our experience and loved everything we tried.