New Orleans was showing us a good time—delicious food, great cocktail bars, and days filled with live music in the streets. I was experiencing the city known for its raucous parties from the lens of adulthood, enjoying it with my dear friend from college, Steph. Steph and I have taken more than a dozen trips together over the years, including a recent jaunt to Palm Springs. (Read our Palm Springs getaway guide and Jake’s Palm Springs brunch review.) These days, we favor early bed times that allow for morning workouts and productivity, so we were curious to see what New Orleans had in store.

We felt a little too old—and too over it—to hang on Bourbon Street. Truth be told, in my case, I probably would never have liked Bourbon Street. New Orleans by day, with its warm weather, delicious restaurants, charismatic street musicians, and lively energy is my speed. By night, I found myself appalled by the messy streets filled with messy people and wanting to hide from the filth.

So, we spent our days sightseeing. (Save for one day, when the prior evening’s festivities got the best of us and we slept in far too late.) We pushed back our brunch reservation thrice, and eventually rolled into Cane & Table just before brunch service ended. Fully aware of our transgressions, we politely tip-toed and begged our way into being seated. The friendly staff didn’t seem to mind, but informed us some dishes would be unavailable due to the fact they had run out. 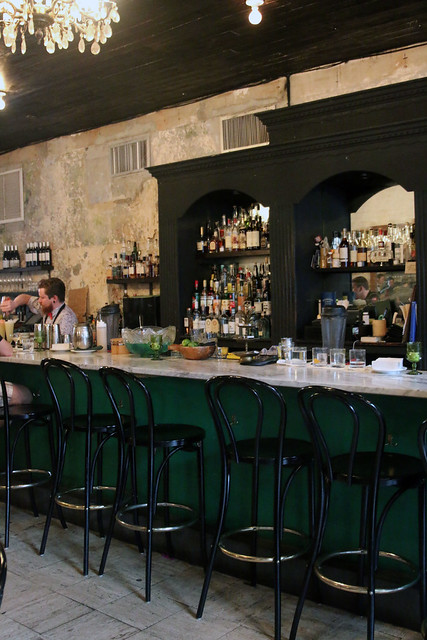 Much like Sylvain, Cane & Table is a cozy little cocktail bar and restaurant built into a very old carriage house. Upon entry, I was immediately taken by the space, which had the vibes of a 1920s bar and brasserie. There was a long, wooden bar lined with wooden brasserie stools that looked like they’d been put to good use over the years. The opposing wall was lined with wooden booths and mirrors—it was cozy and charming. 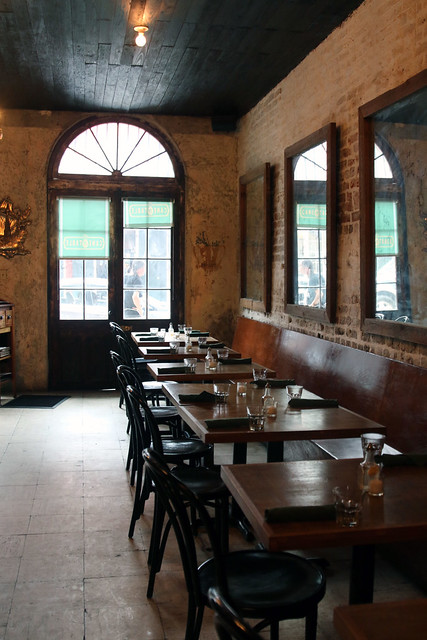 We made our way outside, to the back patio, where there were metallic patio tables spray painted blue, and farther back, picnic tables surrounded by greenery making for a quiet little oasis. This is definitely the type of place you can come and stay awhile—and stay we did, from a late brunch through to the bar’s early happy hour. 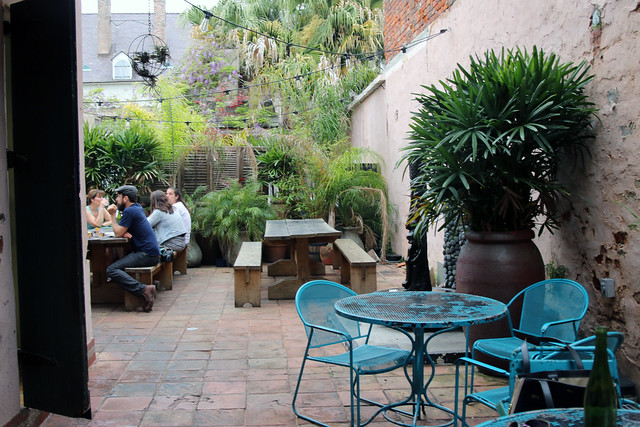 We were attended to by a trio of female servers: a manager, a waitress, and a waitress in training. They were all impossibly cool—with their tattoos and unique hair styles. I’d made note that we’d encountered quite a few badass women working in the service industry in New Orleans, something I really appreciate.

We began with cocktails: a classic mimosa for me and a Michelada for Steph. Served in a coupe glass, this mimosa was concocted with spiced orange shrub for some added kick and a lovely Brut bubbly. Meanwhile, the Michelada was a Modelo beer with a habanero vinegar, lime, and salt. An impressive selection of brunch cocktails—the mimosa, a Basque mimosa (made with cider), the Michelada, a Bloody Mary, a Paloma, and a brunch punch— are all available as part of all-you-can-drink for $35. 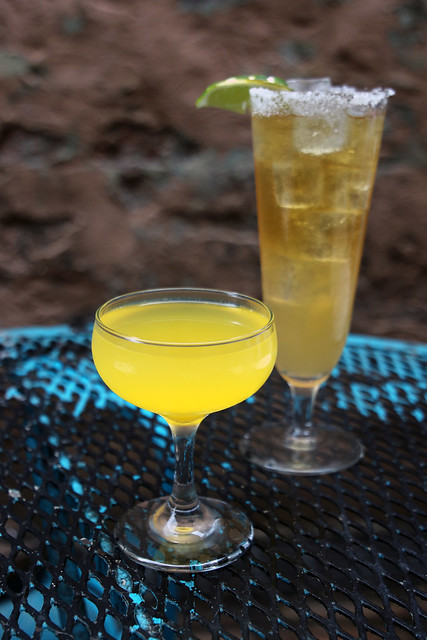 For starters, we initially thought to order the three-pea hummus with yucca chips, but instead opted for the peas and rice. We were both expecting green peas, but were served brown peas (shoulda known!) with coconut rice and onions. It was a great, hearty starch for a starter, but didn’t really do the trick. We should have realized this was the South and we should have expected brown peas. 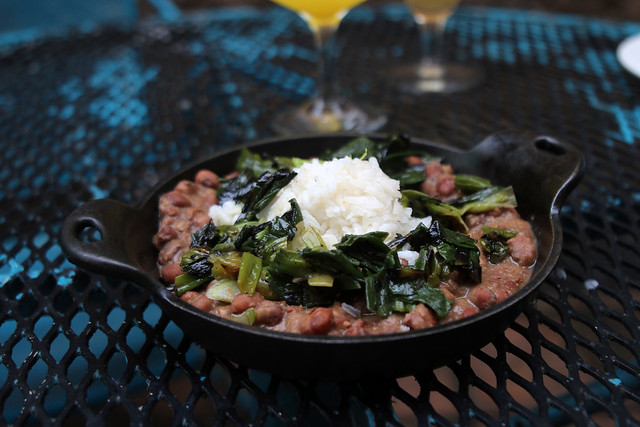 Next up, we shared the kale salad, comprising ribbons of kale, marinated sliced beets, and Cotija cheese, dressed in a remoulade. It was fresh, but the salad was very, very over-dressed. We were both pretty put off by that. We wanted our greens but didn’t want all the dressing. 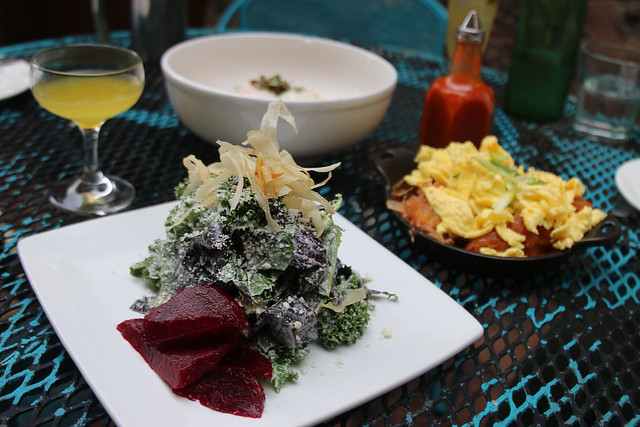 Both Steph and I enjoy hearty, stomach-coating brunch dishes, opting for savory plates with plenty of veggies and meat. We both agreed to share the pork and yucca hash, served with roasted poblano peppers and scrambled eggs. When it arrived, it was far less appealing than it sounded on the menu. There was a lot of yucca, covered in a red sauce that lacked flavor or visual appeal. The eggs were scrambled dry, and the dish not presented that beautifully. But, most importantly, there was hardly any pork to be found. We both dug and dug with our forks, but hardly any meat was in this dish. 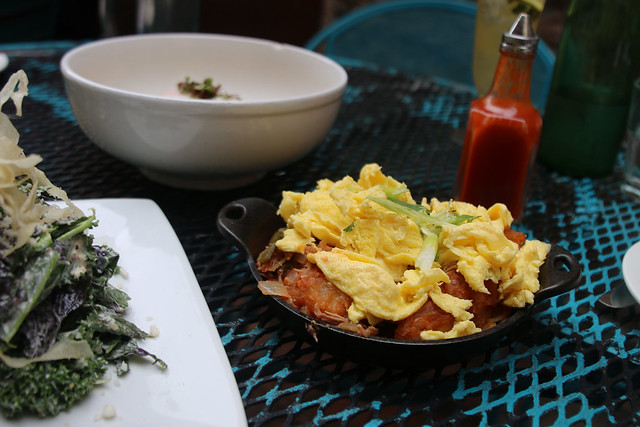 Last but not least, we requested the shrimp n’ grits, but were told they were out of shrimp. (Given our arrival at a late hour this was our fault.) The waitress said they would whip up a similar dish, with mushrooms instead of shrimp. But, when the dish arrived, it was grits, with a poached egg, and the onions that were served with the shrimp, but no mushrooms. I went through the verbal description of the replacement dish in my head, and I was pretty certain it was supposed to have mushrooms, presented in a different fashion, rather than the shrimp’s accoutrements of onions and red peppers, without shrimp. There must have been some confusion in the translation between diner to waitress to kitchen.

That said, the grits were heaven, and the eggs were soft poached in the most perfect of fashions. We can tell this is a chef with finesse. 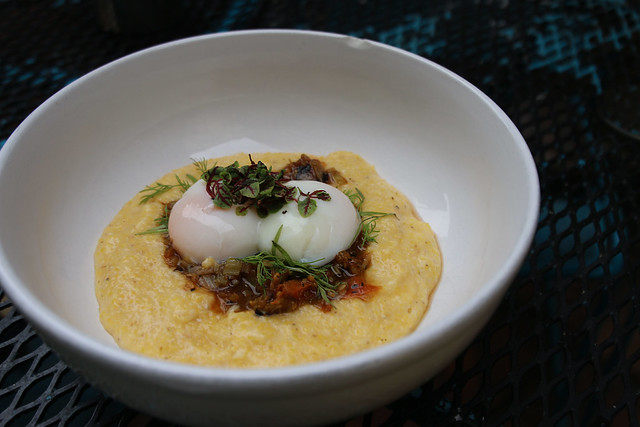 While we can agree that the missing shrimp in the shrimp n’ grits was our fault, we’re not certain about the missing mushrooms, or the lackluster nature of the other dishes.

Not ones to give up, we decided to order another round of cocktails and dessert, hoping to end our experience on a high note. Happy hour was starting, and we were impressed by the inventive cocktails available.

I couldn’t resist the Boss Colada, a fancy version of the classic Piña Colada, made with pineapple, lime and snaps. Meanwhile, Steph opted for the Sacred Herb, a Piña Colada served in a literal coconut, with coconut cream and Herbsaint, and Anise. She didn’t care for the Anise, but we agreed that’s mostly her fault for ordering a drink with Anise if she doesn’t care for the flavor.

Steph really appreciated that the cocktail menu was structured like a compass, with cocktails sorted as refreshing, classic, adventurous, or heady. 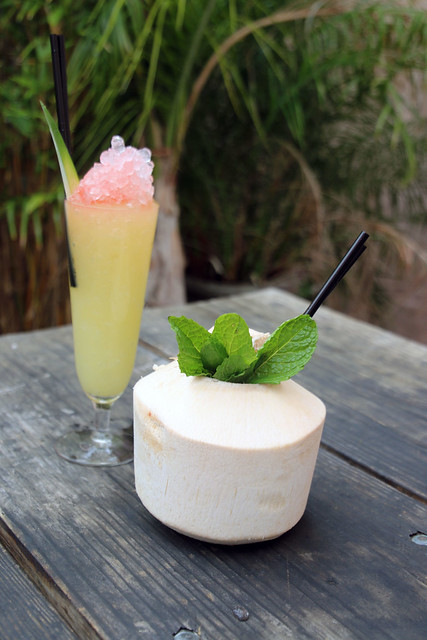 And, we’d be remiss if we didn’t mention the dessert: one of the better flans we’ve sampled in our days. My mom makes a killer flan (Hi, Mom!) and I have to say this might be better than the ones she makes (Sorry, Mom!). The classic Spanish dessert was perfectly crispy on the outside, with the exterior caramelized in a fashion quite comparable to cremé brûlée. The rest of the dessert was creamy, moist, and decadent. It was perfectly executed. 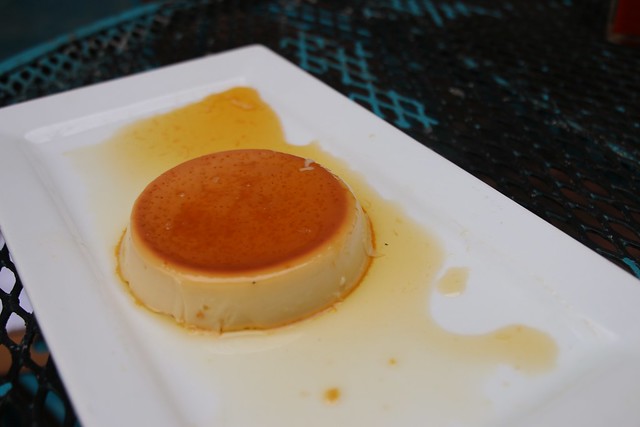 We would certainly return to and recommend Cane & Table for cocktails by day or night, particularly given the restaurant’s great ambiance, patio, and solid happy hour menu.

A big thanks to Visit New Orleans for helping us make the most of the city!

The Bitches say: B-. We loved the ambiance, cocktails, service and dessert at brunch at Cane & Table. But, food is the main event and, on our particular visit, the main entrees were off. We’re willing to venture that this was dumb luck and say you should pop over, at least for a Boss Colada.