I have been in restaurant public relations since graduating from college in 2012, although, I must admit, the Chicago food scene is far more vast than the D.C. circle I was once familiar with.  The one thing I love about being in the restaurant PR world is the many wonderful people you meet, who despite backgrounds, interests, likes and dislikes, have one core commonality with you—a love for food.

My friend Noli works for a lovely PR company that we love and know within D.C. When she realized her good old childhood friend (me!) was writing for the blog here in Chicago, she reached out  to inform me that her colleague Beth had recently moved to Chicago and that we should link up. Yay! A new foodie friend!

Beth and I had chatted for about a month before our schedules finally aligned and we had a free Sunday to grab, what else, brunch. Beth had been in Chicago less than six weeks and had moved to my neighborhood of all places! This excited me because I had been wanting to check out the new restaurant that had just recently opened around the corner from me, and I finally had someone to join me. 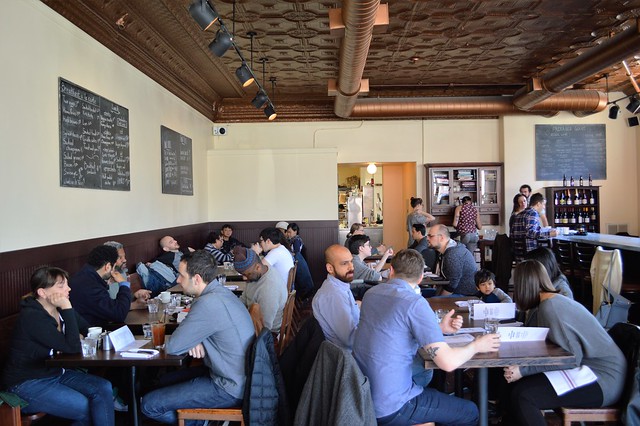 Cafe Marie-Jeanne is a cute little spot on the corner of California and Augusta, a prime location that is a host to a number of new, cool restaurants and coffee shops. While plenty of those places serve coffee and weekend brunch, what was lacking was an everyday breakfast spot. It is in good company by the businesses that surround it, though. Haymarket Tavern and Rootstock are right across the street; Rootstock is where the owner was executive chef until he left to open Cafe Marie-Jeanne. 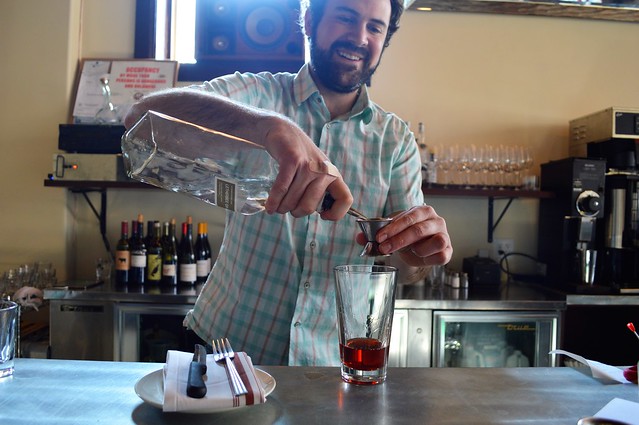 The cafe is a quaint and perfectly well-lit spot, with a large dining area and a long welcoming bar that stretches all the way back to the kitchen. The restaurant was busy, and although there were a few open tables, I was immediately drawn to the bar. While waiting for Beth, I was greeted by a really nice (not to mention cute!) bartender named Ryan. He offered me a beverage to start with and I opted for a coffee and a mimosa. 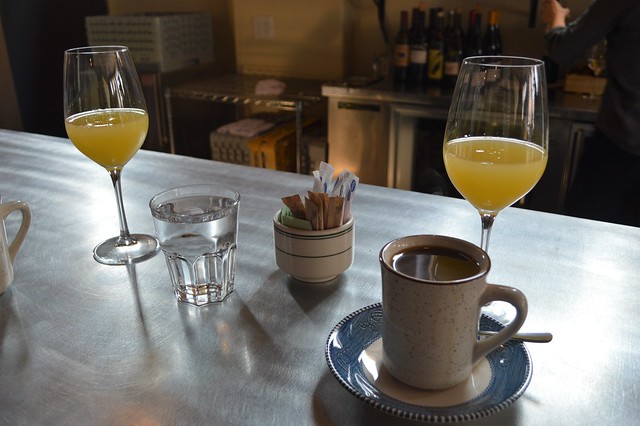 Beth arrived shortly after me, and after joining me at the bar she ordered a mimosa as well. We were both hungry and immediately started to peruse the menu. There was little that did not excite us. We decided we would share everything and order anything that appealed to us, which again, was quite a bit. 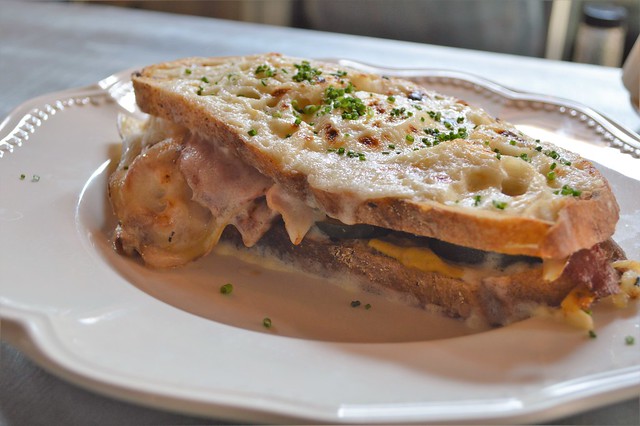 First out was the smoked trout and the croque madame “Van Damme.” I have never been a big fan of smoked fish, but I disclosed to Beth I was anxious to try it more. Well, now was as good a time as any, because it was delicious. For not being a fan of smoked fish it was a game changer for me; I really enjoyed it, as did Beth. 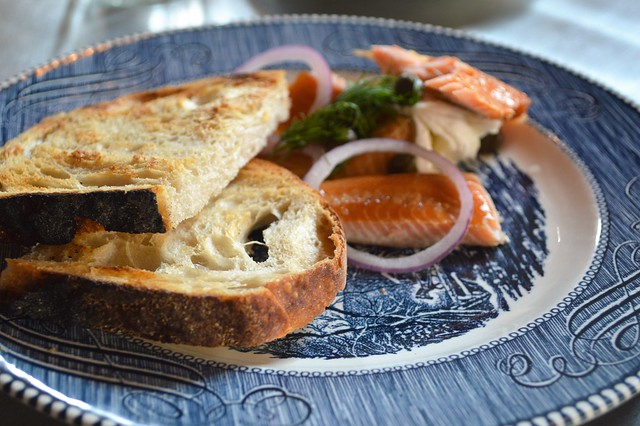 We had order a few sides; sauteed champignons, the biscuit with jam, squash and hazels, and bacon. They were all delicious and very complimentary of each other. I especially enjoyed the mushrooms; perfectly sauteed to the point of sweetness, they were the kind you could chow down like kernels of popcorn. 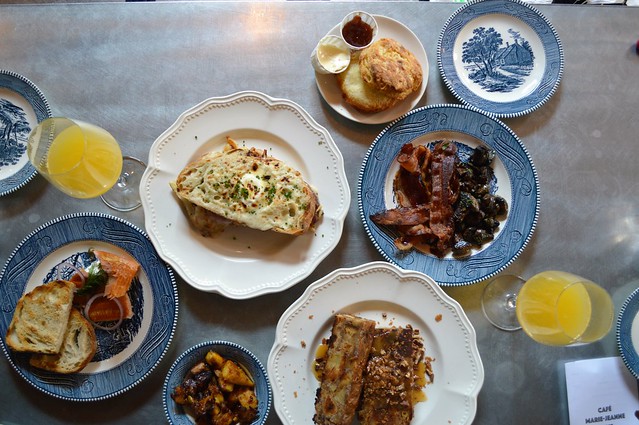 Finally, the pièce de résistance arrived—the smoked pecan French toast. It was huge! Beth and I were almost full, but had saved room for this little bit of heaven. As Ryan, our bartender had told us, it was basically a bread pudding-like concoction of whatever leftover bread they had; biscuits, croissants, you name it.

Smothered and covered in a caramel-like sauce, it was definitely the dessert of our meal. Too rich for my liking, I was only able to have a few bites; albeit they were pretty yummy bites, just too heavy to have more than a few. 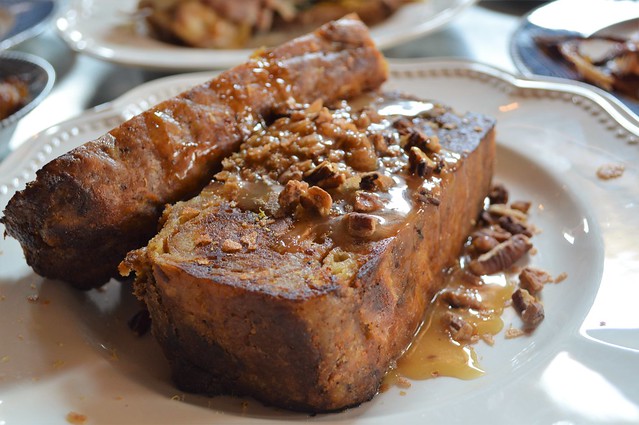 Overall, brunch was quite the success, and I have since been back twice in the week or so since first visiting with Beth. A lovely take on a Parisian cafe, this place is definitely here to stay, which, for a neighbor like myself, is great thing to hear. 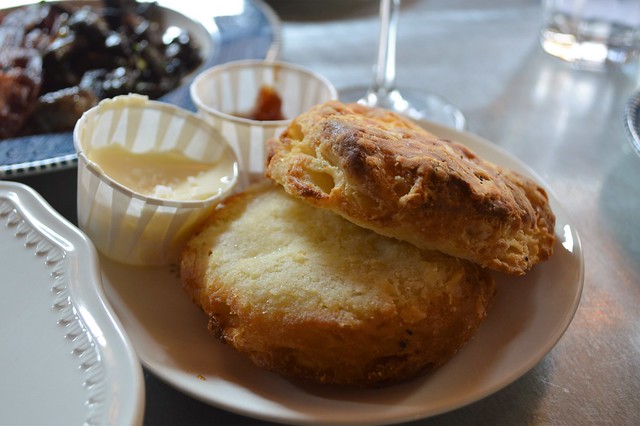 The Bitches say: B+. Cafe Marie-Jeanne is a lovely spot serving breakfast every day of the week. With delicious house-made pastries, cured meats and fish, and a variety of sweet and savory dishes (not to mention vegan options!)  this is the perfect spot for everyone.