You know those restaurants you see that are always packed, always have a waitlist, and are always on the top of everyone’s lists to dine at? Well, I would say that Cafe Ba-Ba-Reeba! fits that mold.

No matter the meal, time of day, or day of the week, Cafe Ba-Ba-Reeba! seems to be bursting at the seams with people, and also tops everyone’s lists of favorite restaurants in Lincoln Park.

Cafe Ba-Ba-Reeba! is a Spanish-style tapas restaurant, and with it seeming so popular and agreeable no matter the time of day, I felt I needed to go and see what all the fuss was about! So, one weekend I brunched with my friend Britt, and my boyfriend, Cam. 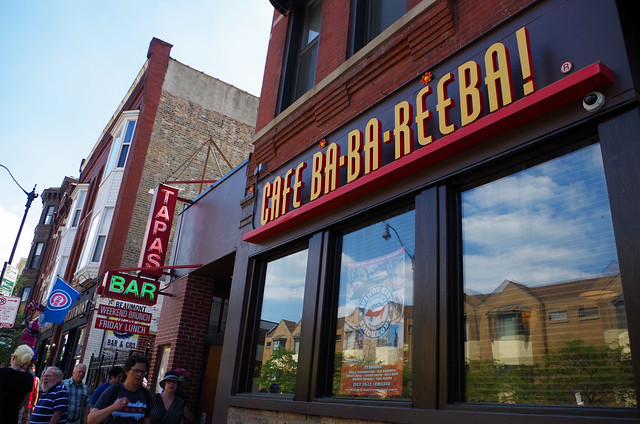 Britt and I arrived together around 1:30 p.m. on a Sunday, and waited for about 20 minutes before our table was ready—honestly, I was expecting a bit longer of a wait, so I was happy with how brief it ended up being. We invited Cam as well, and of course, he arrived fashionably late.

Cafe Ba-Ba-Reeba! is one of those places that is deceptively enormous. The restaurant itself is not that wide, however it goes back into the abyss. The walls are a rich burgundy red, with dark wooden tables, chairs, and rich red colored leather booths. Artwork fills the walls, and all of the pieces of art reflect the Spanish theme. Britt and I were seated at a table in a back area with vaulted ceilings and skylights to allow for more light—it was really tranquil and quiet by comparison to the front of the restaurant, which was packed. 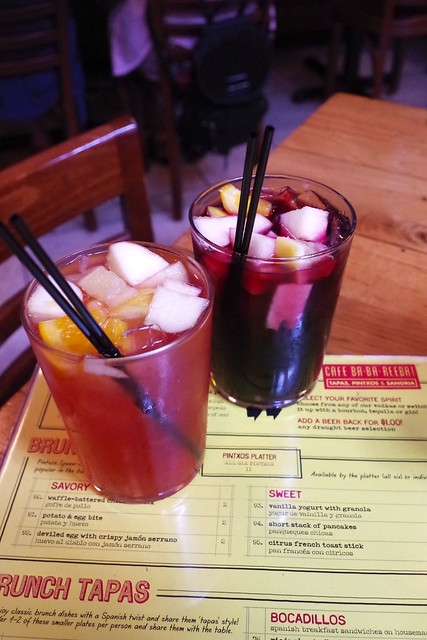 Britt and I agreed to wait to order food until Cam arrived, but decided cocktails were necessary while we waited. I had noticed at the front that there was a Bloody Mary bar, but I chose to try something a bit fruitier. Both Britt and I ordered sangria, I chose the classic red sangria and Britt opted for the black raspberry sangria.

I enjoyed my fruity, red sangria—it was tart, and refreshing. Britt liked her berry inspired sangria, but like me, was ready to move onto tapas.

Once Cam arrived, we dove headfirst into the menu and ordered several to share. 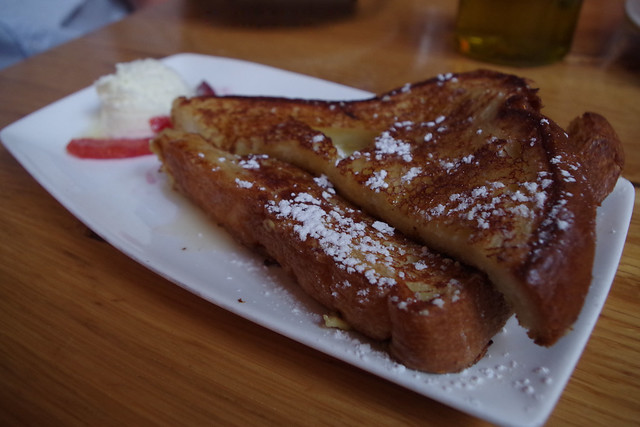 First up was the citrus French toast. The bread was thickly sliced, with orange and grapefruit zest and whipped butter on the side. This was by far my favorite of all the tapas we sampled. The bread was light, fluffy, and not overcooked. The flavor was tart, subtle, and left you wanting more. 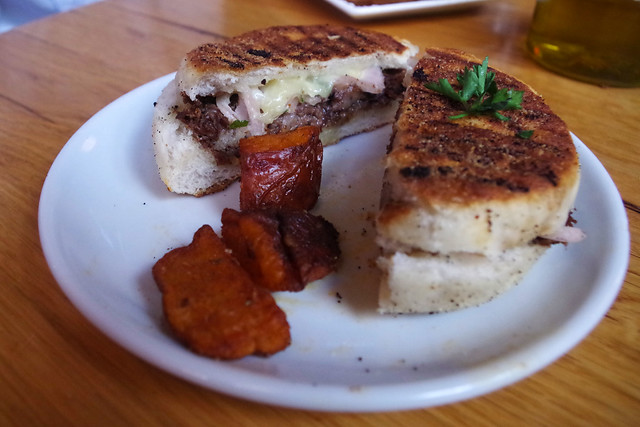 For Cam’s first tapa, he ordered the Rioja short rib slider. The slider was short rib, and cheese on a grilled bun, and came with a small serving of potatoes. Cam liked his dish, but was ready to try more things as he knew that with tapas, it’s expected to try a variety. I think that meant he wasn’t a huge fan of this one, but did remark that the potatoes were spicy, and cooked to perfection. 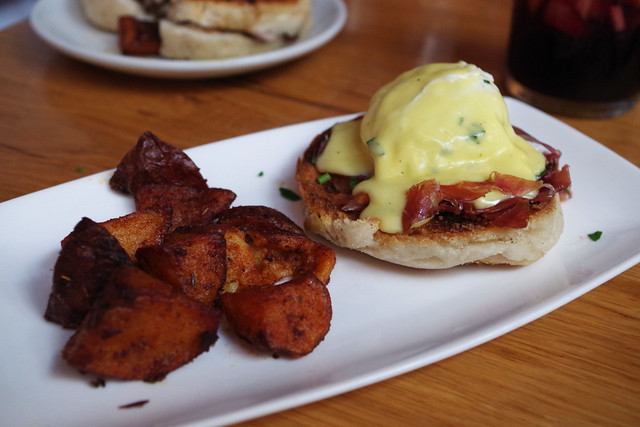 Britt’s first tapa choice was the eggs Benedict with Serrano ham, Hollandaise, and chives atop an English muffin. While the muffin was delicious, it was a bit too toasted. So much so that it was hard to cut through—no good. I trusted Britt when she said, “she’d had better eggs Benedicts”. Alright, moving on!

After the sweet French toast, I had a hankering for something savory. I began to browse the menu and low and behold, my favorite savory dish was listed: mac and cheese—yes, please! I ordered my own, with no intention of sharing. Cam and Britt knew this, so Britt put in an order of the mac and cheese for herself as well, but added a fried egg to her mac and cheese. 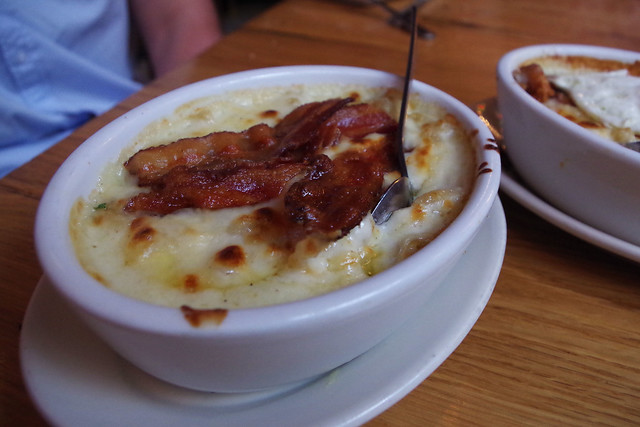 Not to feel left out, Cam ordered chicken sticks and a deviled egg, while Britt and I inhaled our mac and cheese. 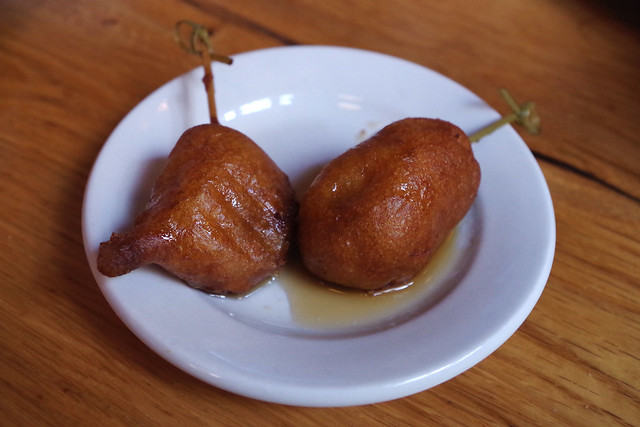 The chicken sticks came out and Cam tried to get excited but was let down from the get go. Unfortunately, the chicken sticks reminded him more of a sad corn dog than anything else. Britt tried one, and felt the same way—this was not a winning dish, to say the least.

Next was the one deviled egg—yes, you read that correctly, just one. Cam had forgotten he ordered it until he came out and looked at the dish perplexed, assuming that there would be more than just one. But alas, the description says “one deviled egg”—that will have to do then. 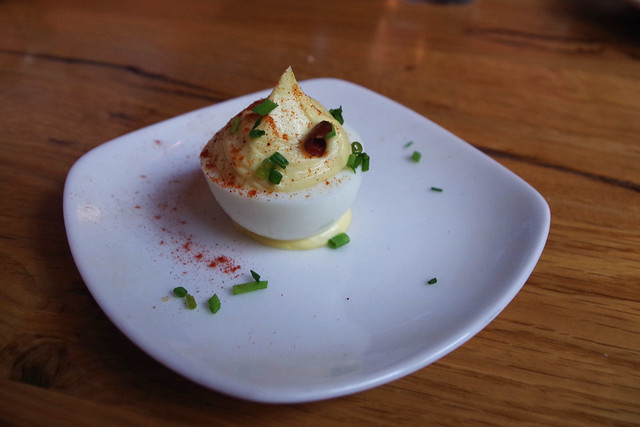 The one deviled egg was OK, but certainly the smallest and least impressive presentation of the dishes. Perhaps only second to the deviled egg were the chicken sticks.

Cafe Ba-Ba-Reeba! is one of those places that I have always wanted to go to, and was excited to try the food. I really wanted to like it, since it’s been so popular, but I can’t stand behind the brunch—it was lackluster in the presentation, and underwhelming in execution. It pains be to say that the only dish I really enjoyed was the French toast. Beyond that, I was not pleased with this brunch.

The Bitches say: C. The service was great throughout the meal, but there were some misses when it came to the dishes.