I experienced a great deal of sorrow when La Tasca announced they would be shutting down their Clarendon location. When I first settled in Arlington over six years ago, that was my go-to spot for tapas and sangria. After many months without word, we began seeing the construction of their replacement, Buena Vida Clarendon.

If you’re a frequent visitor of Ambar, then you’ll without a doubt enjoy the vibes at Buena Vida, too. After all, both restaurants fall under the same ownership group. With my foodie friend Kevin by my side, we ventured into Clarendon’s latest brunch spot to sample an array of dishes. 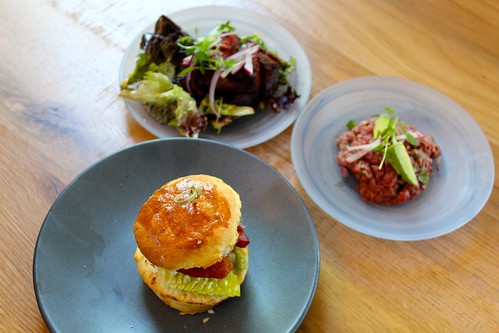 Buena Vida prides itself on serving traditional dishes from the Vazquez Lugo family of Mexico City. With that in mind, Chef Gerardo Vazquez Lugo has curated a rather diverse assortment of small plates that keep diners coming back for more.

Any food photographer enjoys great natural lighting, and Buena Vida has plenty of that. Floor-to-ceiling windows overlook various other establishments and pastel-hued furniture adorn the interior. It’s almost like you’ve traded your SmartTrip card for a passport to venture south of the border.

I decided on the “menina mimosa” while Kevin stuck with the hibiscus margarita. Both acceptable options as they feature bold, fruity flavors without an abhorrent amount of sweetness. We both came starved and rather than suggesting a few plates to eat, our server insisted on serving us nearly 80% of their menu.

Everything came in threes, and our first “course” was carne apache (beef tartare), steak salad and the BLT slider. It was a strong start to an unbelievably delicious afternoon. If you’re looking to begin any brunch with something light, I highly suggest the steak salad. The meat is perfectly seasoned, and the chilmole mayo (which is also on the tartare) is a great alternative to salad dressing. The carne apache was unapologetically opulent, however we could have done without the cilantro. 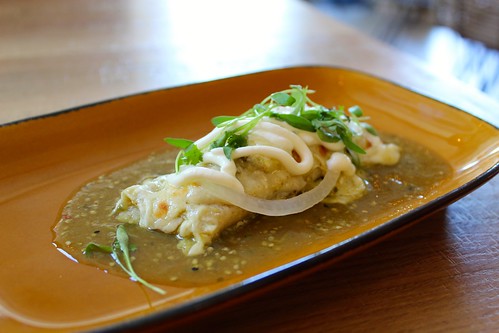 Up next came the short rib hash and the chicken enchilada, which we already deemed our favorite plates of the day without even tasting the rest. The meat had a slightly salty aftertaste that when paired with the tender vegetables made an incredible combo. I could speak about the enchiladas until the room spins. What really sets it apart from other brunch enchiladas is the house cheese mix, which we were told is made fresh each morning. It’s creamy, tangy and a perfect complement to the tomatillo salsa. 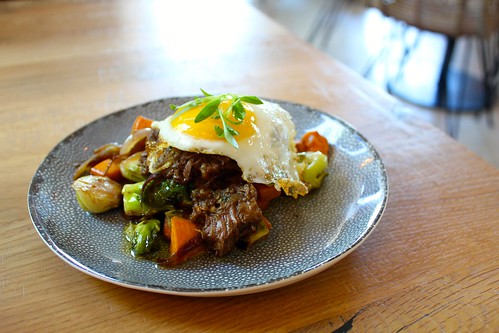 If you’re a big egg fan, you’re in luck. Almost every brunch dish at Buena Vida comes topped with an egg cooked to your liking. For our experience, we went with over easy. 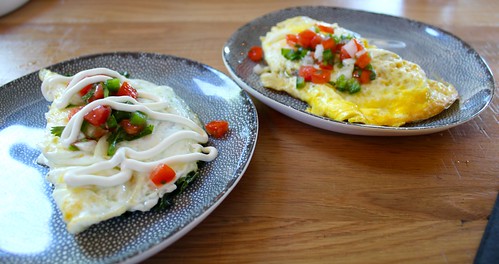 They also specialize in omelets, which you can request with just egg whites. Between the egg white and the mushroom omelet, we were divided. I’m a mushroom fiend, yet Kevin prefers a little green in his omelets. Regardless, we concluded both weren’t quite as memorable as our previous dishes, but suitable for someone looking for a more traditional brunch option. 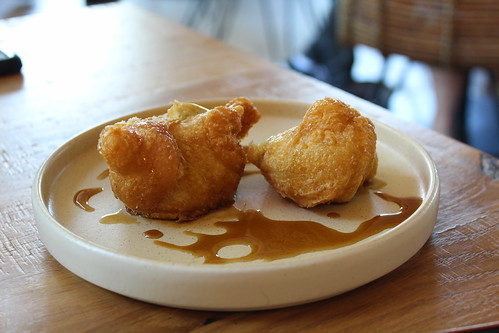 At this point, we were plenty full, but there was no way I was leaving Buena Vida without trying the buñuelo, which is a traditional Mexican donut filled with pastry cream. Fresh out of the fryer, the airy balls of carbs were a perfect send-off to our delightful afternoon. They’re ridiculously sweet, but that may be because I doused mine in the honey glaze before and after each bite.

From the cocktails to the fare, Buena Vida Clarendon is the perfect replacement for fan favorite La Tasca. Next time, we might hold off adding an egg to each plate.