Broken English is a fairly new taco spot in the Loop that opened conveniently on Cinco de Mayo earlier this year. From the minds of Adolfo Garcia and long-time restaurateur, Phil Stefani, Broken English is located on the corner of Michigan Avenue and Lake Street, steps away from Millennium Park. It is literally a taco pub in the sense that they serve up delicious traditional Mexican street tacos in a flash, and it has a cool, urban vibe.

The interior is very cool, with the walls being literal works of art. Chicago-based graffiti artist JC Rivera did most of the graffiti art in the interior. A beautiful mural of Frida Kahlo is the focal point when you first enter the restaurant. It is very chic, cool, and unpretentious. It is definitely a cool spot for post-work drinks.

It recently debuted a weekend brunch menu, and I cannot resist Mexican breakfast dishes, so I headed over to heck it out. (Side note worth mentioning: it also has football specials on the weekend, like buckets of Tecate and tequila specials.) Though its brunch menu is not extremely extensive, it has the staple Mexican dishes you crave when brunching at a Mexican spot, so I was fully in! 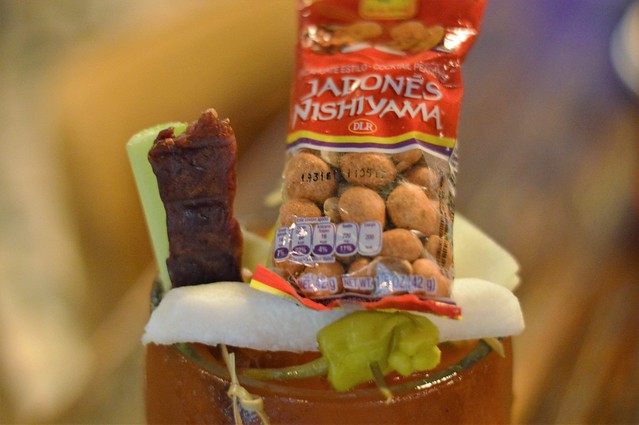 I have a new co-worker Anna who just moved to Chicago, and she and I had been talking about grabbing brunch so I invited her to come with me to check it out. Anna just moved here from Columbus and doesn’t know her left foot from her right here in Chicago, so I was happy to take her to brunch downtown and see just one part of our amazing city. 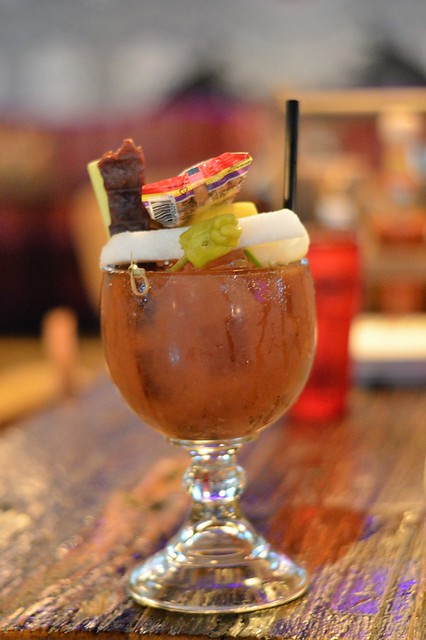 It was a cool Sunday in fall when we arrived at Broken English. Having worked in the Loop many years ago, I was anticipating little to no crowd, considering I have always known the Loop to essentially shut down on the weekend.  At Broken English though, I arrived right around 11:30 a.m. to a surprisingly full restaurant. The front windows were open to the bustling sidewalk and a cool fall breeze flowed through the restaurant. 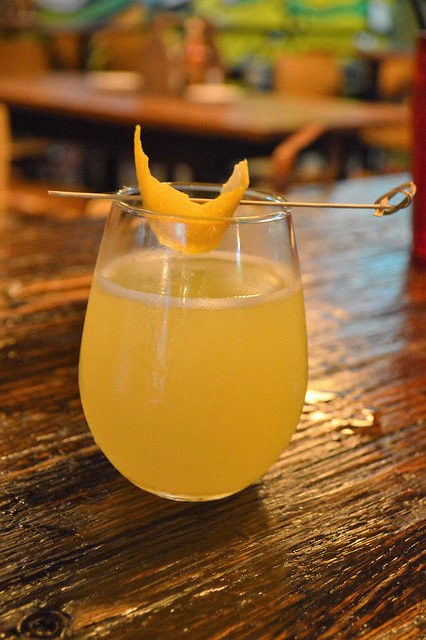 Starving, we were almost instantly ready to order. As I mentioned before, the brunch menu isn’t super extensive, so basically we wanted one of everything. Anna opted to start with a twist on the brunch bloody Mary, Broken English’s signature bloody, made with tequila.  I opted for a mimosa, as I had to work later in the day and only want a little bit of refreshing bubbly. 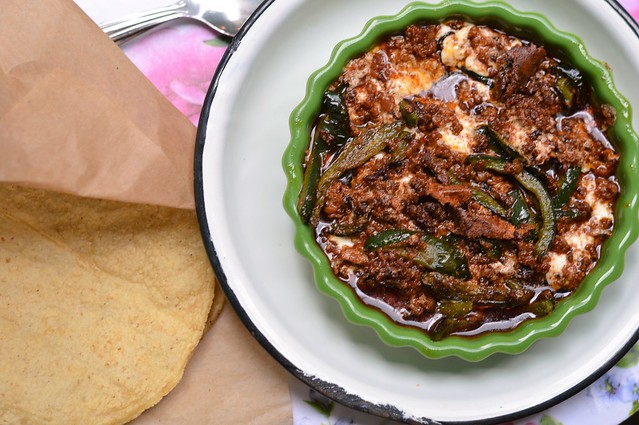 The brunch menu consists of queso fundido, pozole verde, chilaquiles, a carne torta, and then the always-available chorizo con huevos tacos. I was excited for it all, but decided to start with the queso, and then also aive the street corn hush puppies a go, as well. I cannot resist anything with Mexican street corn!  The queso came served piping hot with warm tortillas and it was cheesy, delicious goodness. I loved this and strongly encourage them to make it available at all times. 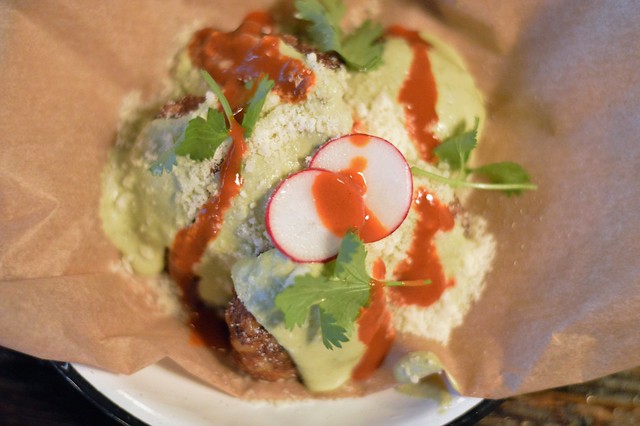 The hush puppies were delicious as well; fluffy deep fried puffs filled with fresh corn and then smothered with a spicy combination of poblana crema and a red salsa, giving it some added heat. I could have done with less sauce, as it took away from the crispiness of the hush puppies, but the sauce was delicious. I had intended on asking for it on the side as to dip with other dishes, but ultimately I forgot. 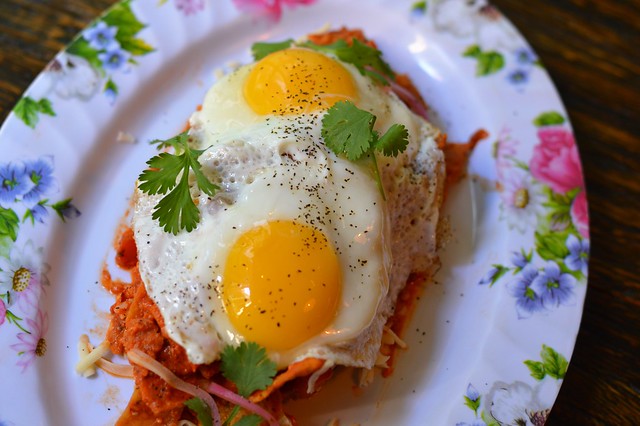 Our other dishes came out shortly after. We decided to get an order of fish tacos as well, and skip out on the carne torta. The chilaquiles arrived and are a massive pile of nacho chips, loaded with housemade pico de gallo, cilantro, chef’s secret recipe hot sauce, crema, cotija cheese, radishes, and fried eggs. I loved them; the fried eggs oozed over the sides of the chips, and though drenched in loads of toppings, the chips remained crispy.

The tacos arrived and they looked simple, but nonetheless tasted delicious—exactly what a taco lover like myself would desire from traditional Mexican street tacos. Anna and I swapped tacos to have one of each. I went for the fish taco first so that I could still get back to my brunch essentially after giving it a try. The fish tacos were definitely more aesthetically pleasing, they were vibrant in color while the chorizo con huevos were kind of bland looking, as is to be expected from a simple taco of eggs, chorizo, and few flakes of cilantro. 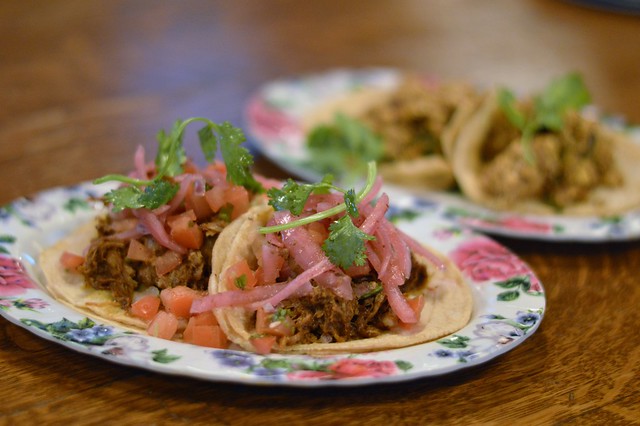 The fish tacos were yummy. I love all fish tacos, and these were no exception. The fish was grilled swordfish, which is nice, opposed to the standard tilapia tacos found at most taco joints. Swordfish is a higher quality fish, more flavorful, and it is thicker, meaning more meat in your taco, which I appreciate. Anna especially loved the swordfish tacos. 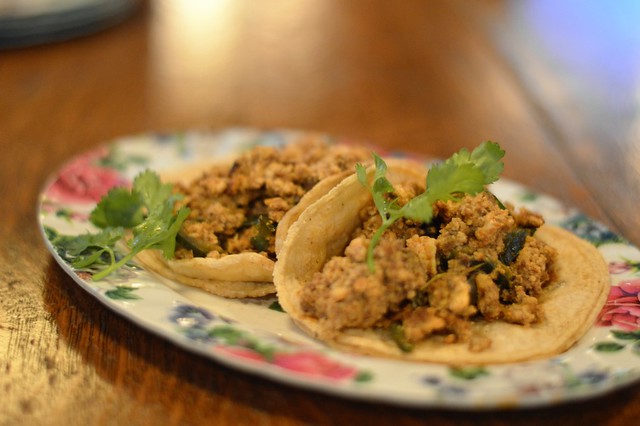 The chorizo con huevo tacos were pretty standard. Nothing too exciting about them, but that was fine by me. They are the perfect breakfast tacos, with fluffy eggs and spicy chorizo warmed in a corn tortilla. I topped it with some of the housemade salsas on the table. 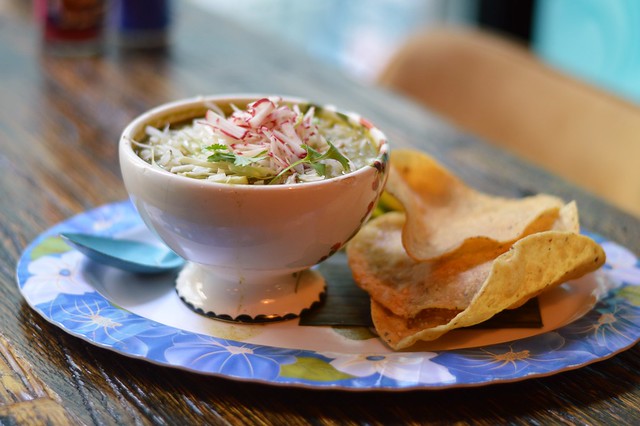 Finally, we ended our meal with a dish I was dying to try, the new pozole verde dish. I remember years ago where pozole seemed weird to me; I never wanted to try it. Well, the day I finally did was a great day for me. Pozole is a hearty, brothy traditional Mexican stew that is packed with flavor, and the restaurant’s is pretty good. This dish is the perfect soup to warm you up on a chilly Chicago day. It has a flavorful broth, with chucks of meat, hominy, and cilantro, and then it comes topped with fresh cabbage for a little crunch. I thought I was full but I am so glad I made room for this dish! 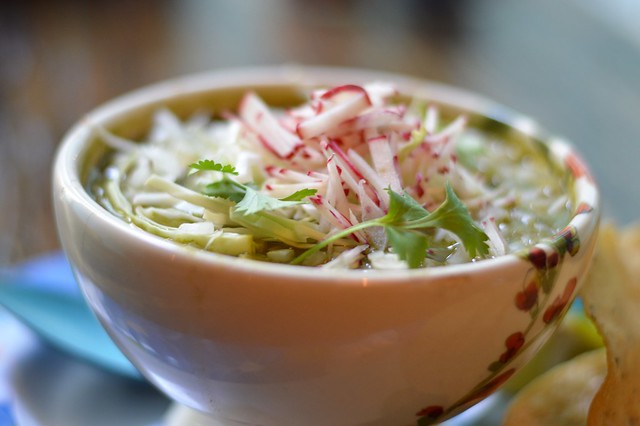 Our meal was good. I was warmed up thanks to the hearty pozole, and was feeling great. That was until our server sent over two of Broken English’s housemade signature “fireball” shots, called the bola de fuego, with cinnamon and spice-infused tequila. They arrived in the cute mini mason jar glasses, and upon opening them you are stung with the strong scent of whiskey. 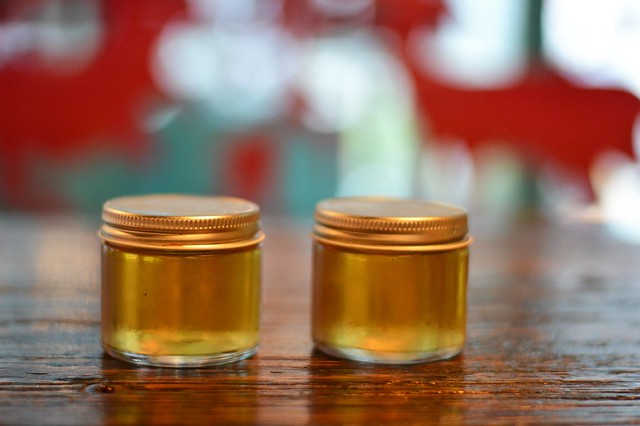 Also worth mentioning? The size of these shots; they are no joke people. Anna was excited to try these, but I was too conscious of the fact I had to work later, so I politely took a few sips of mine and then let Anna have the rest! They are strong, but good. Definitely more for Friday nights as opposed to Sunday mornings, but hey! No judgment here. 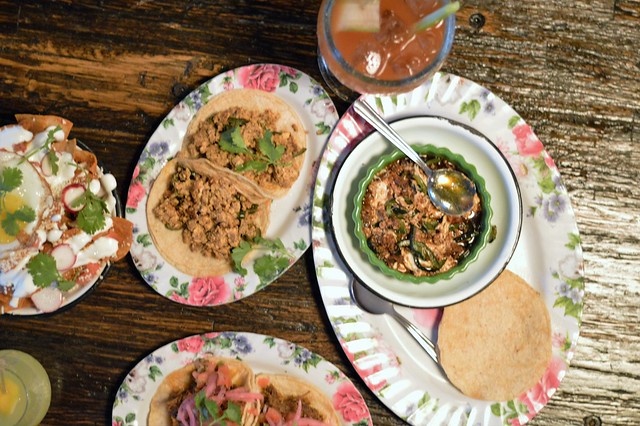 Broken English is cute, and they execute a great meal that is not over complicated, which is clearly their mission. Flavorful, traditional Mexican tacos and food, in a fun, exciting and vibrant setting. It is laid back, but this isn’t Uncle Julio’s. Come here for a good time, any time. They have fun games for people to play too, which is what I plan on inviting girlfriends to do the next time we get together for cocktails. Having not had brunched at a Mexican spot for quite some time, this was a great reintroduction to what I love about Mexican food so much!

The Bitches Say: B-. Broken English is a fun, exciting and cute spot in the Loop. Come here for laid back tacos and cervezas, and now that they have brunch, there is never a bad time for tacos. If you are looking for a unique Mexican brunch spot, don’t miss out on this spot.

Broken English serves weekend brunch on Saturdays and Sundays from 11 a.m. until 4 p.m.