This past Saturday turned out to be a particularly fitting day to brunch at a restaurant named after Brigitte Bardot. Brigitte, a Franco-Brazilian bistro in the Two Bridges neighborhood of lower Manhattan, seeks to celebrate “all independent and fearless women with a zest for life.”

Fitting partly because I am such a woman (hear me roar), but mostly because Saturday also marked the 2018 Women’s March, a female-led movement in celebration of women’s rights and their political power to “create transformative social change”—a movement celebrated by millions, yes, but not without its critics. 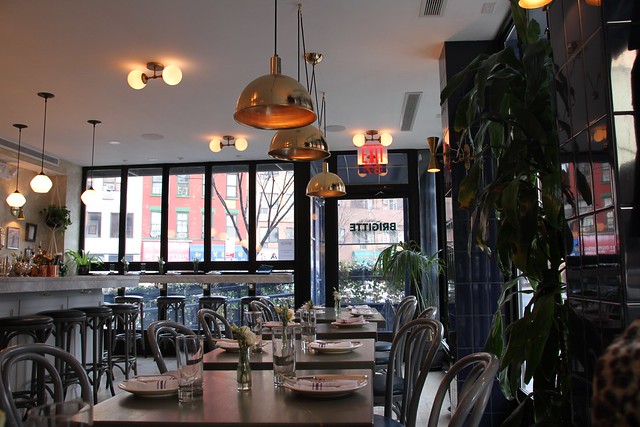 I missed the event last year, so this year I was eager to join my fellow members of The Wing in celebration of being fearless, fabulous, and fierce (or something like that). So I made a sign (nolite te bastardes carborundorum), I went, and I chanted (We need a leader, not a dirty tweeter!), but then it was time for brunch.

We didn’t want to leave the march, and it was actually difficult to do so because the roads were blocked off by the police, but eventually we made it to Brigitte and were met by the very accommodating staff.

The restaurant itself is beautiful in that purposefully trendy Lower East Side way, with a large marble bar, banquettes and café tables, and a few bits of greenery, giving it pretty much the only Brazilian vibe I encountered the whole time we were there. 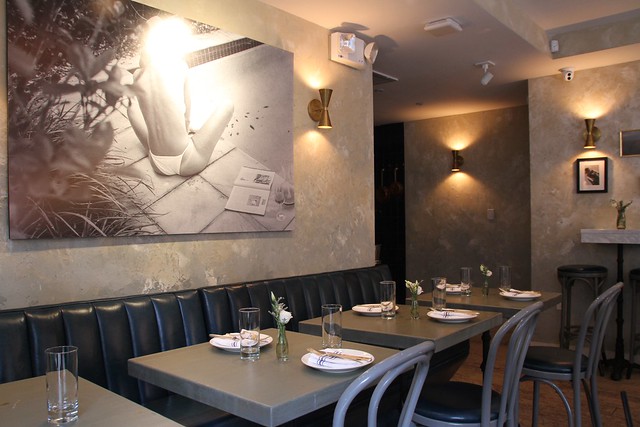 My favorite thing was the large-scale photograph of a young woman in a bikini sitting by a pool. Stock imagery? Hard to say… Overall, Brigitte felt like the kind of place you very much enjoy while you’re there but might be unable to describe in much detail later on. For the most part, that is.

I certainly remember my Bloody Mary, a house-made concoction that was savory, spicy, and salty in all the right ways. I actually finished the entire thing, which is more than I can say for many a limp, watered-down Bloody Mary I’ve left languishing in a sweating glass during other brunches. My hungover friend, however, found it too spicy and left his entire cocktail alone for most of our meal. 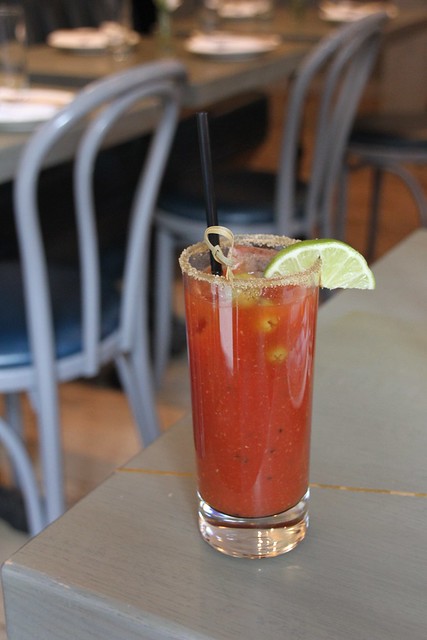 I chose the charcuterie plate as the appetizer for our brunch trio that day. A combination of chorizo, prosciutto, salami, cornichons, jam, and two kinds of paté was served alongside toasted country bread, and I’ll say this first: the chorizo tasted like Hillshire Farms kielbasa (go, meat?). Certainly not a bad thing, but not what I was expecting either—flavor and spice.

The rest of the meats were tasty, and jam, salted butter, and chewy bread will always make me happy—so we were generally satisfied with this starter, if not blown away by its flavors (a theme for the whole brunch, for the record). 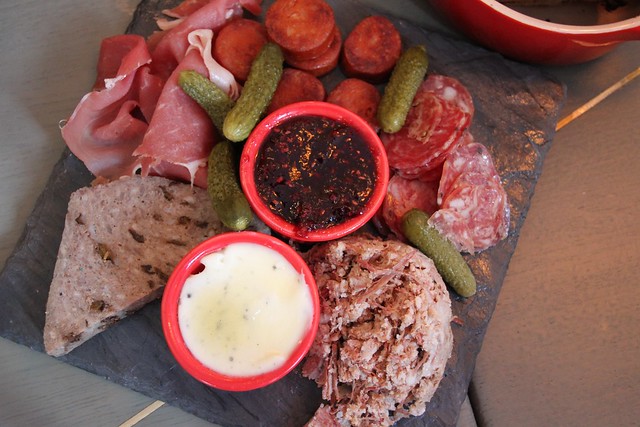 We took our time choosing entrées because everything sounded really good. Eventually I decided on La Cassolette, a cheesy dish of baked egg and chorizo covered in a creamy sauce. It was warm, tasty, and comforting, though I missed the tang of tomato or something acidic. The dish is normally served with yucca fries (there’s that Brazilian bit), but I subbed those out for the deliciously crunchy fingerling potatoes that came with a little spicy mayo for dunking. 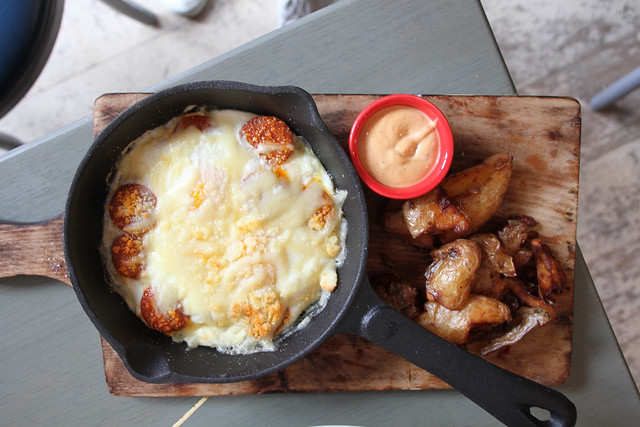 My friend Maryam consulted our really patient and kind waitress about her food allergies, and the waitress was nice enough to run back and forth from our table to the kitchen asking the chef about this and that. Eventually, Maryam ordered the grass-fed steak with a side of crispy potatoes (that the chef graciously cooked up in a separate fryer to make sure they were completely free of her various allergens). 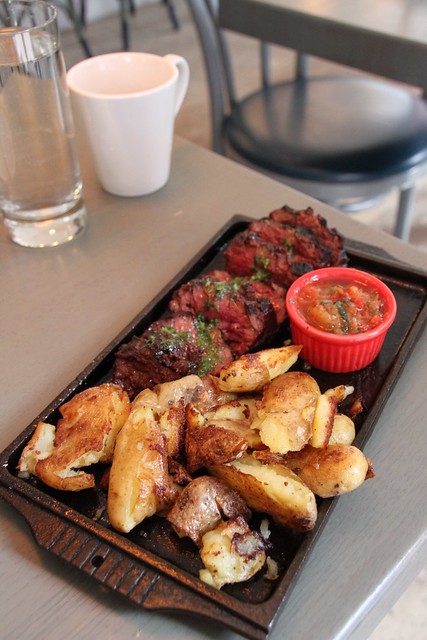 Maryam really appreciated the care that was taken to accommodate her many food allergies but ultimately wished the food had more flavor. She did, however, love the potatoes and said her steak was perfectly cooked. 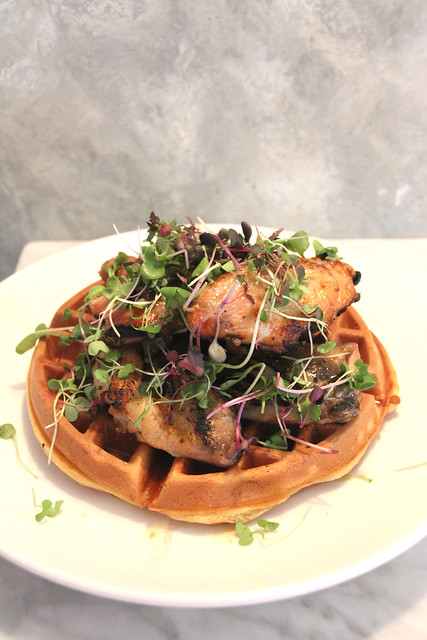 Our third bruncher, Darius, changed his mind a few times but ended up going with the chicken and waffles—Brigitte’s version is served with baked chicken, a departure from the O.G. fried version of the classic dish. Sometimes, it’s better to leave classics alone, and sadly this dish proved that point. Darius noted he enjoyed the waffle, but he couldn’t help wishing the chicken had more flavor and was fried. 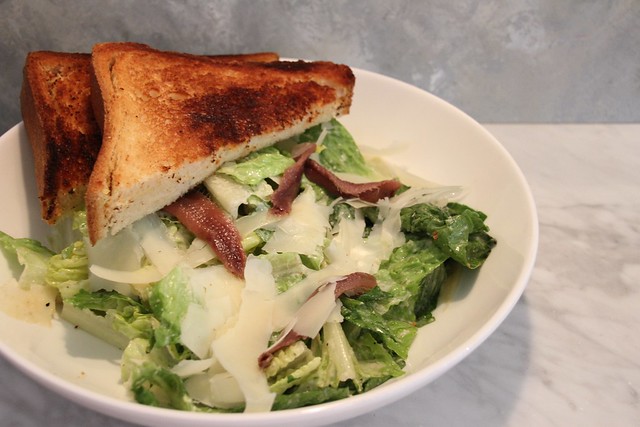 I also ordered a Caesar salad to share but ended up being the person who picked at it the most. The menu version came with two poached eggs (Caesar but make it brunchy), but I chose to do without since we all had other entrees. I enjoyed the classic rendition of the dish and give marks for the anchovies and lots of shaved parmesan. It was a classic Caesar—nothing more, nothing less.

Ultimately, I wish I had seen more of Brigitte’s Brazilian side, which seems to be more noticeable during the restaurant’s dinner service. Though our brunch entrées left us wanting more in the taste department, the attentive service and hospitality, beautiful space, and great bar make Brigitte a lovely spot to hang out if you’re in Two Bridges. Thank you for having us, Brigitte!

The Bitches Say: B. If you’re in the neighborhood, head to Brigitte for its satisfying Franco-Brazilian flare, warm hospitality, and one heckuva Bloody Mary, but we wouldn’t necessarily go out of our way to brunch there.

Brigitte serves brunch on Saturday and Sunday from 11 a.m. to 3 p.m.