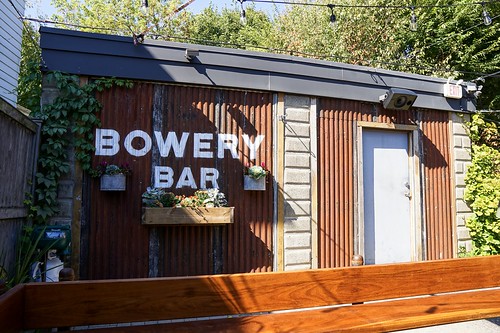 I’ve never been to Nashville, but Bowery Bar has a patio that reminds me of somewhere warm and Southern… like Nashville or Austin. I visited this Lower Mills bar after running my first half marathon, when it happened to be a 70 degree October Saturday. I was not going to miss out on a patio brunch even if I had to limp through the restaurant. 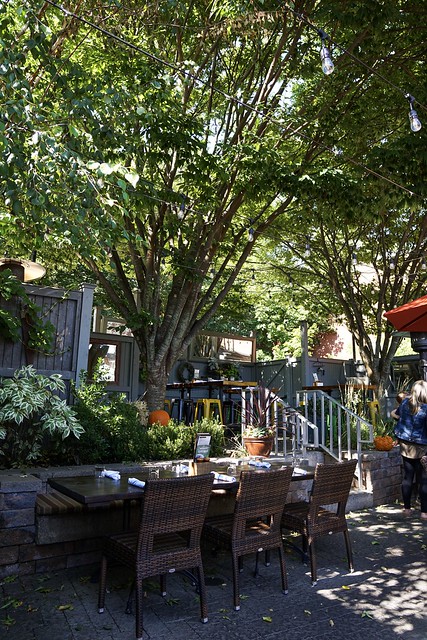 The interior of the restaurant has an upscale casual feel with a large wrap-around bar and an abundance of tables. But when you walk to the back patio, you enter a completely different space filled with greenery, high tops, yard games, and plenty of seating. I perched my sore body on a bench and looked around to see if anyone was eating anything I thought I might like to order. I looked at the menu and realized that the brunch options were vast. My eyes were instantly drawn to the tuna tartar and the scallop ceviche from the raw bar. I was also in need of a drink and some caffeine so I continued my tour of adult iced coffee that I started at Rosebud Kitchen. 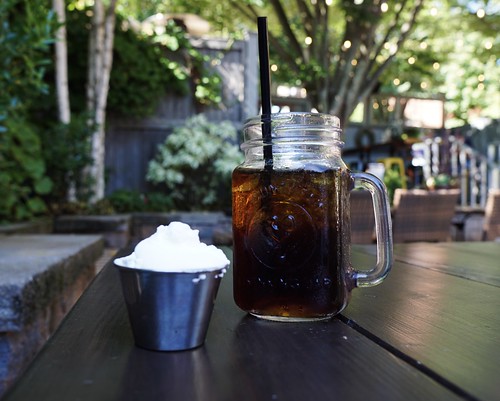 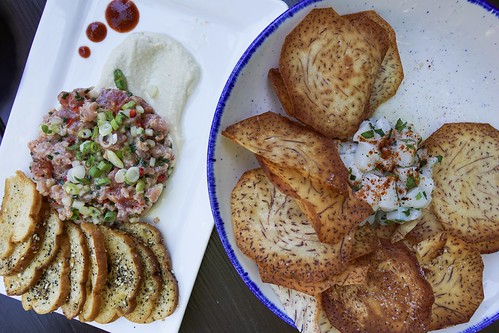 Bowery Bar has the same owners as Lucy’s. The menu is split up in a similar fashion, but the offerings are completely different. As I sipped my iced coffee, Richie finally decided on a drink: a mimosa, how original! My adult iced coffee was a nice kick of caffeine, some hazelnut liquor, and vanilla vodka. The mimosa was simple: orange juice and champagne. 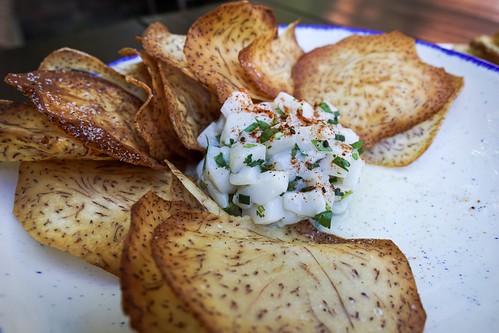 The ceviche was served with some of the best chip alternatives I have ever had: taro root chips. I never knew I would need taro root in my life, but after scooping my scallops with some of the house-made chips, I am on the hunt for a bulk order. Taro root is a distant cousin of the potato but are nowhere near as starchy. This root vegetable creates a  crunchy, airy and extremely thin chip when baked. They did not overpower the simple ceviche at all and are gluten free. 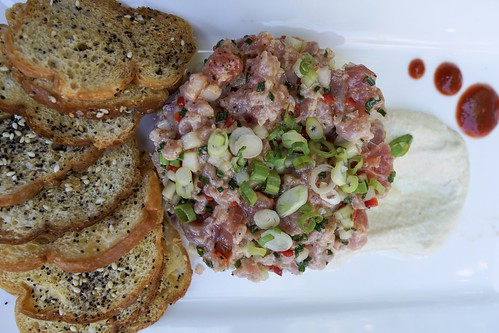 The tuna tartar was amazing as well. The crackers they paired with it were original but not as amazing as the taro chips. They should consider adding a side of taro root chips to the menu! The tuna was fresh and cashew-pineapple butter that was served on the side gave a sweet kick to each bite. 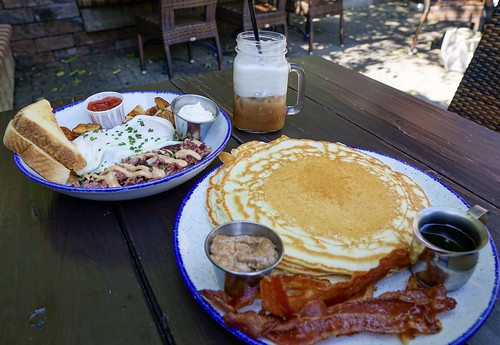 I chose a hearty main dish because my carb supply was completely depleted after 13.1 miles. The hangover bowl was going to replenish me, hungover or not! Richie didn’t go far out of his comfort zone and ordered buttermilk pancakes. Sometimes I wish he would leave the bubble of 5 breakfast dishes he rotates but if you are going to serve brunch it is imperative that you can offer a good buttermilk pancake. 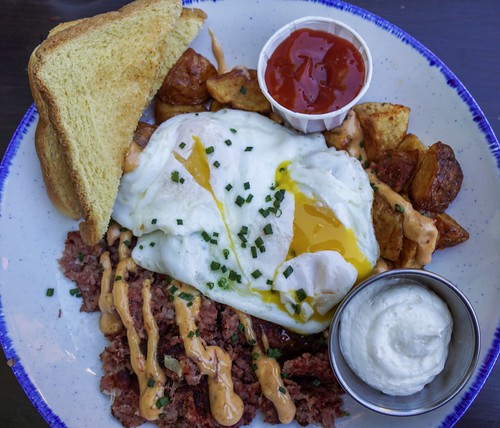 The hangover bowl was hearty and filled with corned beef hash, over-easy eggs, and home fries. Richie was probably wishing he ordered it but would never admit that his simple choices often leave him wishing he experimented more! The corned beef was plenty of protein and the egg yolks served as a great topping, I broke them open and mixed them into the bowl. The two pieces of toast served as a nice vessel for my own open-faced breakfast sandwich and the home fries were crispy yet soft in the middle. 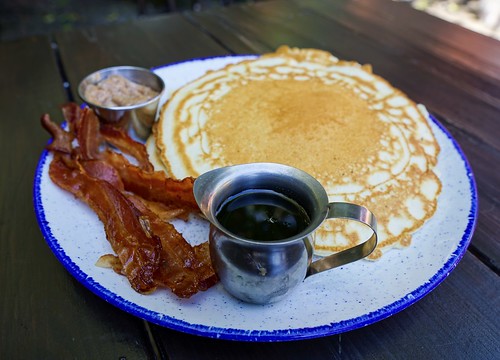 Richie’s pancakes were basic, but I mean that in the nicest way possible. They were golden brown and nice and fluffy. The three oversized pancakes filled up the whole plate. The cinnamon butter was the most unique part of this meal. It truly elevated the pancakes to the next level – cinnamon sugar makes everything better. There was a generous amount and Richie carefully split it into three servings so he would have enough to melt on top of each pancake. The side of bacon was not overly greasy and had a crunch factor. As much as I make fun of my boyfriend for having the palate of a toddler, I appreciate knowing that Bowery Bar serves a pancake that outranks most of the other basic pancakes in Boston.

The patio started to fill up as we were finishing our meals. There were some small groups, families, and couples enjoying a beautiful fall day. No one was playing cornhole, but I can imagine a Sunday afternoon here eating, day drinking, and watching some football (or just hanging out with friends). 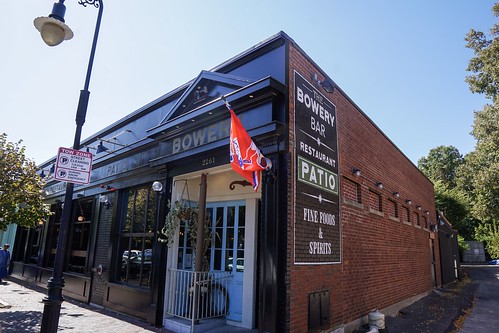 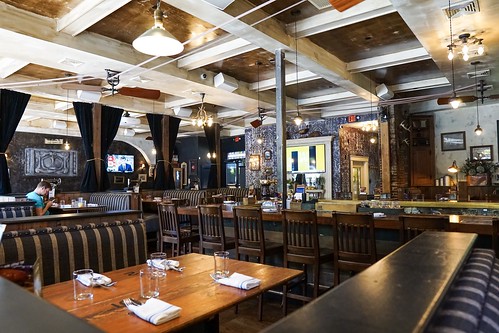 Bowery Bar is our Boston pick for best patio vibes with plenty of space and options that will please picky and sophisticated palates alike.