There are plenty of tapas joints to be excited about in D.C., mastering the art of tapas with brunch, however, can be difficult to come by. Boqueria, near Dupont Circle, has made a name for itself in major foodie cities, and for good reason.

It had been a decent amount of time since our last visit to Boqueria, so we decided to make sure it was still living up to its expectations. With the participation of the entire table, you can enjoy unlimited tapas and drinks, which you’re definitely going to want to do in order to try all the goodness.

Entering the space, we were thrilled that it was packed and filled with lively energy, it was a good thing we made a reservation. Modern and contemporary, decor is looking real good.

As rule of thumb, always order patatas bravas when beginning any tapas meal. That’s how you can gage a good tapas joint. How were Boqueria’s patatas? Awesome, not covered in too much sauce and the potatoes were a balance between French fry and roasted. Now, we may continue the meal with confidence. 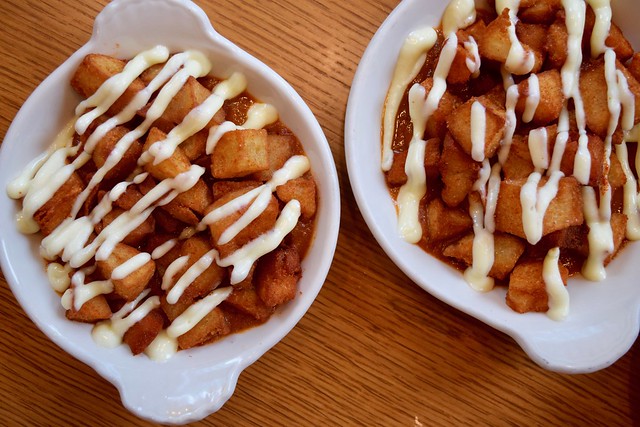 We all had some lemonade which was refreshing and delicious. It was not overly sweet, and didn’t make us feel like we could have stirred up our own Crystal Light packet. Next came a round of crispy calamari. 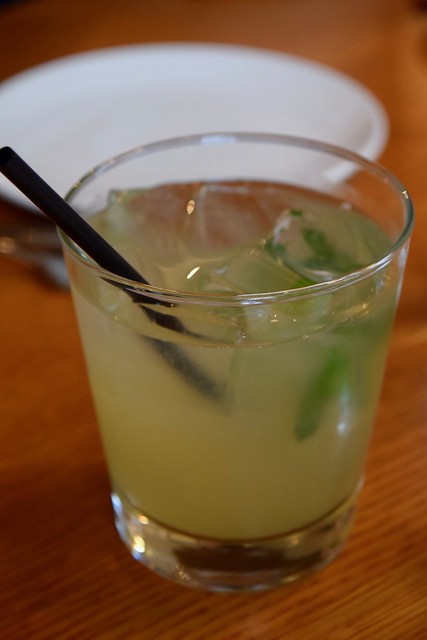 Previously known as a common Italian app served with sweet marinara sauce, this calamari was served with a salty squid ink aioli. While it may have turned our teeth completely black, we couldn’t have asked for a more perfect dish. The food was tender, juicy, crunchy, and was just the right amount of umami. 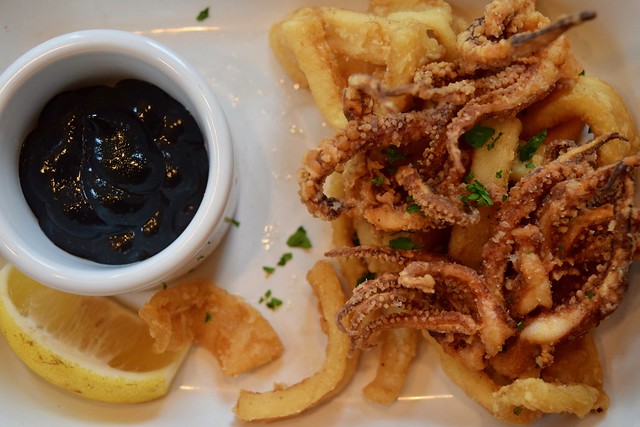 For our main dishes we ordered the steak and eggs, French toast, the menu’s only salad (which the waitress happily altered to accommodate dietary restrictions), and the paella for two. 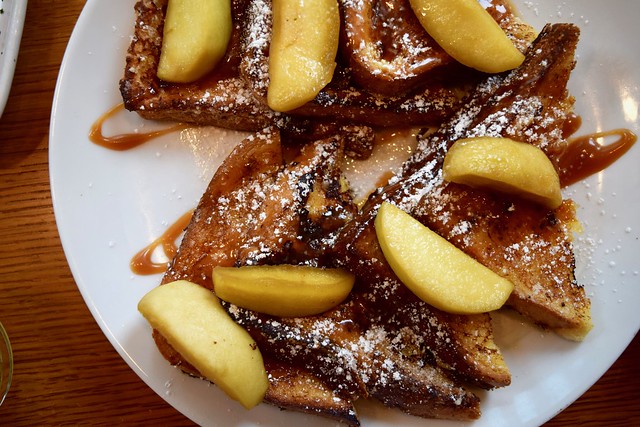 The French toast was an awesome portion size and was one of the most satisfying versions of this dish we had ever enjoyed. It came out piping hot and tasted like pillows of caramelized bread. The apples on top were soft and sweet, but not falling apart into a mushy syrup. 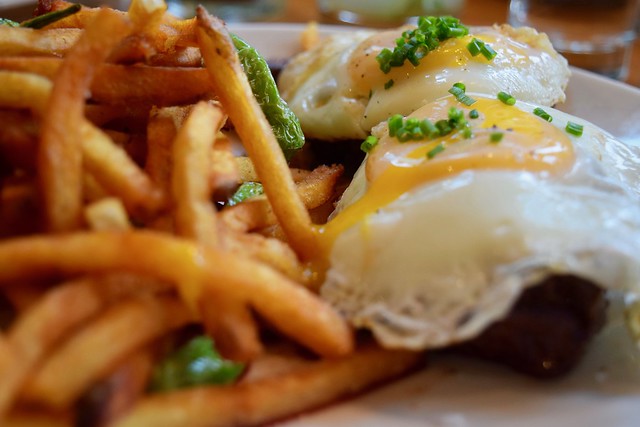 The steak and eggs made us all light up when they arrived because of how bright the dish was. The steak was well seasoned, the egg yolks were runny and savory, and the side of fries were super salty and therefore, super addicting. 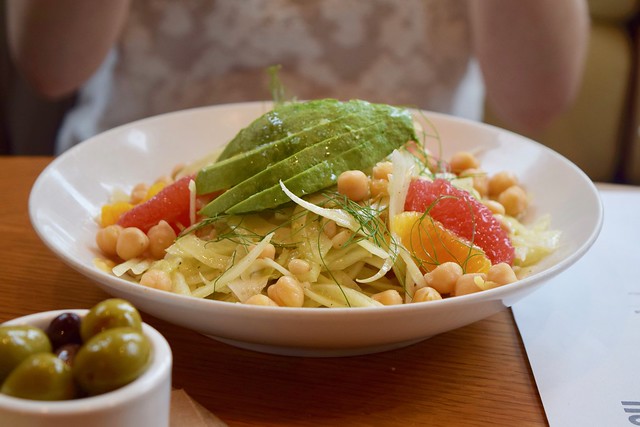 No complaints on this front at all. The salad, though traditional, was gorgeous, well dressed with an acidic dressing, and accompanied by a plate of charcuterie to compensate for the components that were taken out. 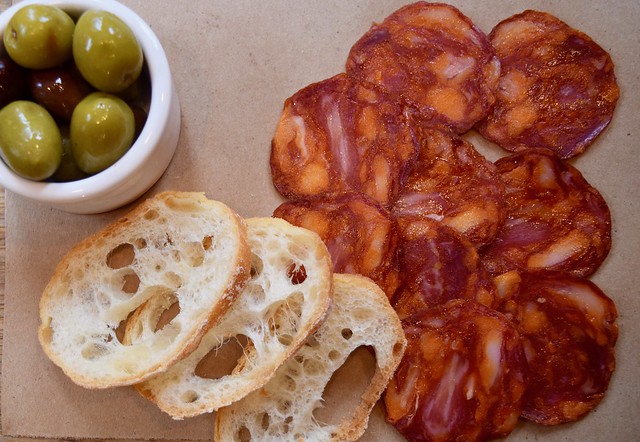 Now onto the star of the show: the paella. First of all, this paella was massive. I’m not saying massive as in like a massive bowl of rice, it was massive in all the greatest senses of the word. This paella had a huge amount of seafood, veggies, and flavor. We were so impressed by the quality and freshness of this dish. 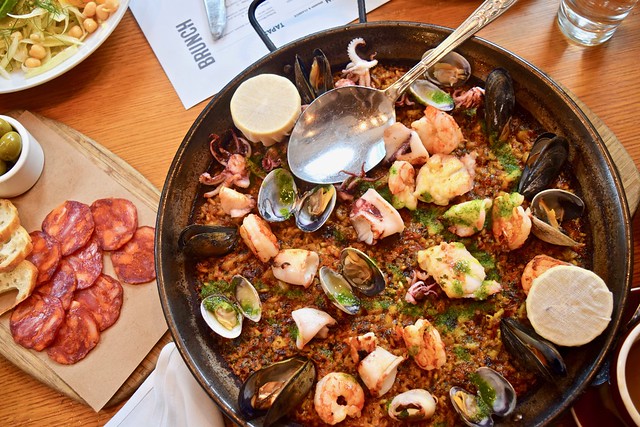 We let the staff know that we were together for a number of celebratory occasions. Celebrating birthdays, good health, and new careers, so we needed a dessert with a “wow factor.” Boqueria delivered said “wow factor” with a hefty ice cream sundae, complete with sparklers.

On top of the hot fudge covered vanilla ice cream were sugary, cinnamony, churros filled with the most decadent caramel sauce. Crispy and still warm despite the freezing ice cream, this was just what we wanted after our savory entrees. 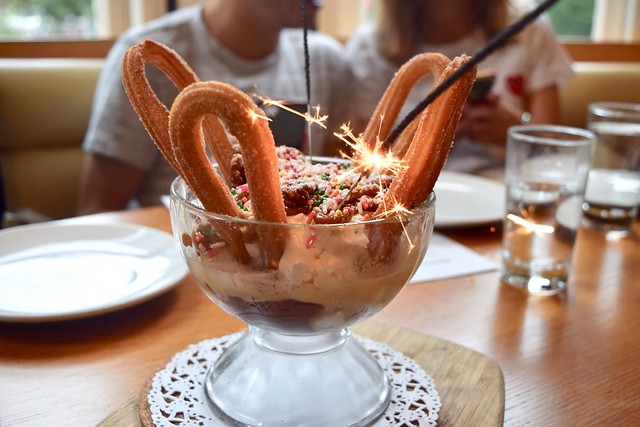 Dessert was literally the icing on the figurative cake of this giant meal. We were stuffed, but fueled up for a day of museum hopping. An added bonus, the service here was incredibly attentive and we all agreed we would be back time and time again. 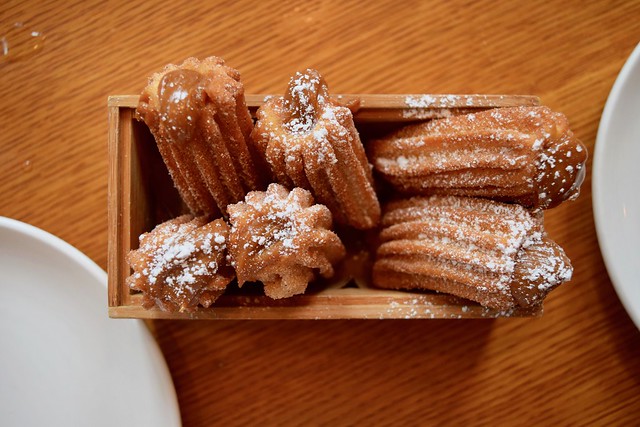 The Bitches say: A. Boqueria may be just one of the many tapas establishments in D.C., but on its way to our bellies it simply clung to our hearts. Boqueria is a must try.

Boqueria serves brunch on Saturdays and Sundays 10:30am to 2:00pm.