I’ve been wanting to try BomboBar since the day I moved to Chicago. Taking breaks between moving boxes up to my third floor walk-up, I scrolled through Instagram and stumbled across this restaurant’s beautiful and decadent-looking desserts. The West Loop restaurant’s feed was mouth-watering and was my earliest confirmation that Chicago is a foodie’s oasis. Finally, six months later, my boyfriend Cam and I had a chance to try the new BomboBar in Old Town. 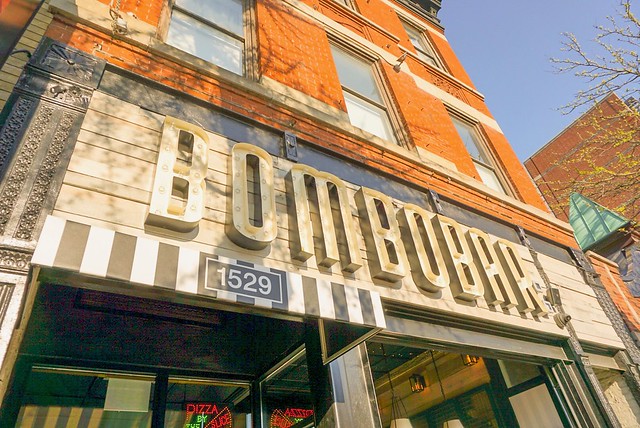 The inside of the restaurant is trendy-chic, with Christmas lights strung overhead and neon accents. It’s on the small side, with only 30 seats, but the tables turn fast and there’s constant foot traffic of customers getting desserts to go. You order at counter kiosks, giving it an informal feel. They serve beer in a cooler, and you can order spiked (or regular) coffees and chais at the counter. 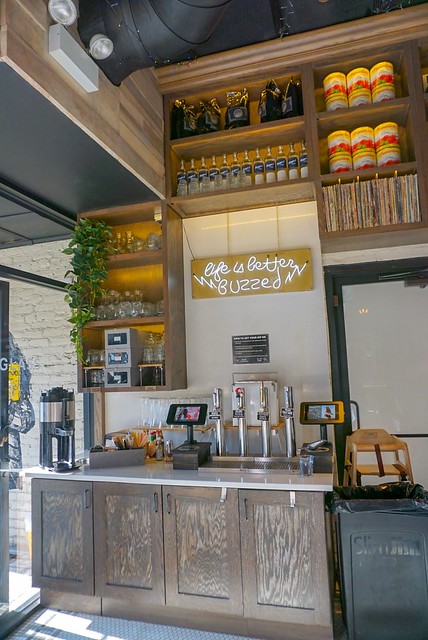 But the real shining star is the pay-as-you-drink wine station, that allows you to fill a carafe and drink to your heart’s content and wallet’s dismay. You pay per ounce for the four drinks on tap. We opted for waters, but I have already made plans for a wine-down Wednesday back at this spot. 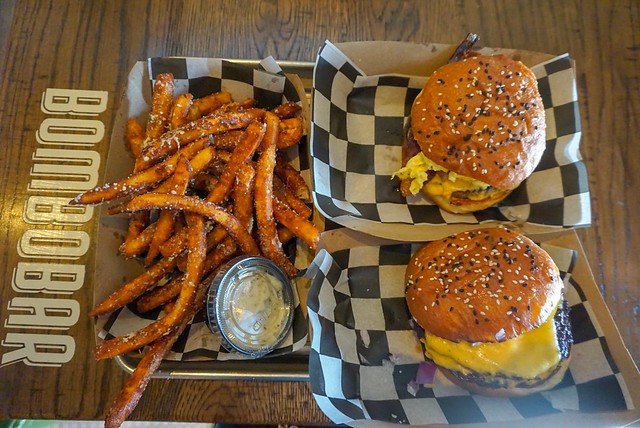 At the kiosk, Cam selected the double Bombo Burger, served on a sesame bun with sharp cheddar, two patties, thick cut pickles, red onion, and a tasty spread of dijon mustard mixed with mayonnaise. While a pretty standard burger, it did hit the spot.

I had the breakfast sandwich, which was scrambled egg, cheddar, bacon, breakfast sausage, and a mustard aioli. The sausage had a nice spice and notes of sage, and I scarfed down my meal. It’s the perfect sandwich for a busy morning because it will keep you full but not stuffed.

We split a plate of parmesan fries in an effort to save room for our dessert. The dark and crispy fries came with a truffle aioli dip that had us scraping the side of the container. It was a large enough plate to split, but truth be told, tasty enough that you won’t want to share. 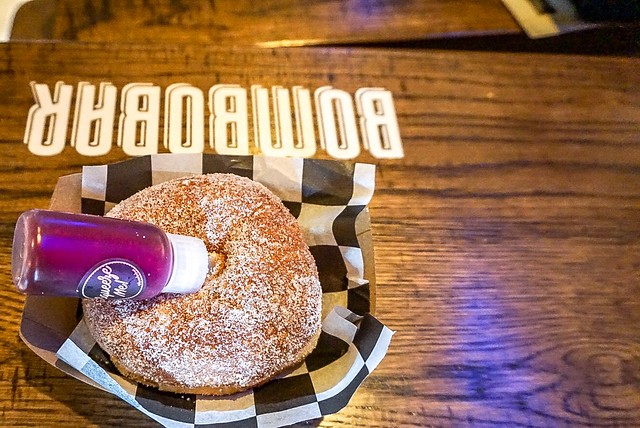 We ordered the dessert in a second order at the kiosk so my bombolone would be warm and his gelato would be cold. Bomboloni are Italian, hole-less doughnuts infused with filling. They are what put BomboBar on the map. You get to select your filling, so I opted for raspberry. The pastry arrived warmed from the oven and covered with granulated sugar. In the center was an adorable bottle full of jam with the instructions “squeeze me.” You get to choose how much of the topping to put into the dessert, but I emptied the entire bottle. I made a bit of a mess, which is fine because it was finger-licking good.

Cam had the white chocolate raspberry gelato with fruity pebbles topping in a cup. BomboBar topped it with a cherry gummy. We both enjoyed our desserts immensely, but next time would have the best of both worlds with a Bombolato; a doughnut filled with gelato!

The Bitches say: three and a half Champagne flutes.

With diner-like sandwiches and scrumptious desserts, BomboBar is a perfect casual breakfast or brunch spot. Bring your pup, because they also serve dog desserts.