There are a few things I love in this world: brunch, coffee, and my Aussie boyfriend. I’ve always loved brunch and coffee—but I never really thought much about Australia or its impact on the coffee culture until I began dating my Australian boyfriend. Turns out, he makes a mean latte and comes from one of the coffee capitals of the world: Melbourne. And, Australians have had quite an impact on global coffee culture—if you’re curious about it, there’s a great article in Vogue, here, and in Barista Magazine, here. 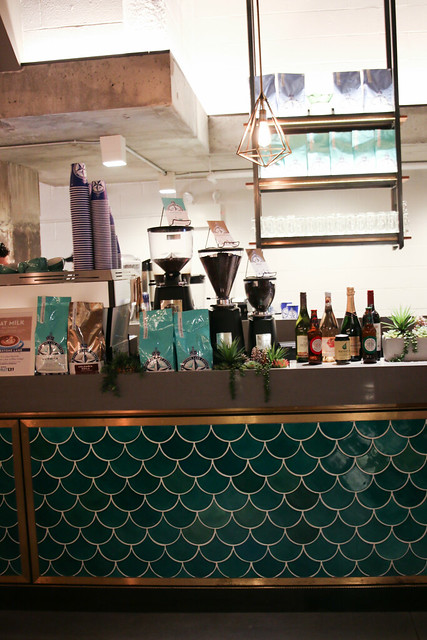 After spending a few weeks in Australia over the holidays, I rapidly discovered no one does avocado toast or a dairy-free latte quite like the Aussies. Facing January withdrawals and miserable temperatures, I made plans to visit Bluestone Lane. I’d visited other locations of the New York based Aussie chain before, and I was thrilled to hear that they opened a location in Washington recently. (Read our review here.) The Australian coffee chain now has 23 locations—and the latest one is located in Hudson Yards. (This brunch was on the house, as we were previewing the new menu.) 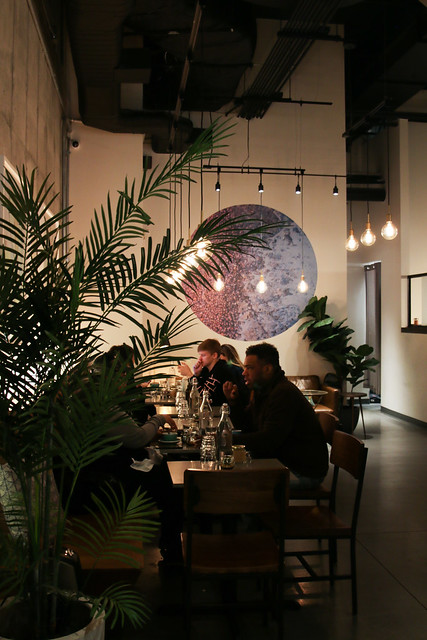 I love the Bluestone Lane aesthetic—bright, blue and white, playful, and highly Instagrammable. So, upon entry, I was disappointed to discover a darker aesthetic at this location. The feel is far more industrial, with a warehouse vibe, dark walls and flooring, and Edison light bulbs hanging from the ceiling. No doubt this is due to the fact this particular café is adjacent to an apartment complex with an entirely different vibe—and the landlord/developer wanted a synergy. While the build out was beautiful, I was disappointed not to find the bright and cheerful aesthetic of other Bluestone Lane locations and what I’ve come to expect from Aussie coffee shops.

Equally important, the harsh yellow lighting made it incredibly difficult to capture pretty photos—which is important to Bitches and brunchers alike these days. 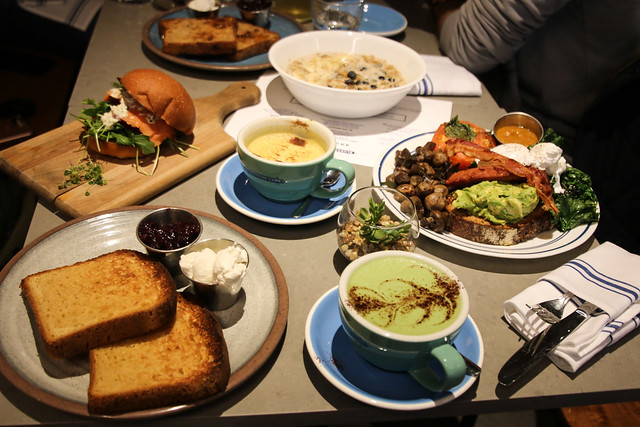 I was brunching with my dear friend from college, Ev, and we both skipped the hard stuff today—both coffee and booze. Instead, we opted for healthful golden and matcha lattes. Ev had never had a golden latte, which is made with anti-inflammatory turmeric for a smooth, spicy flavored cup—and we were both pleased he enjoyed it! 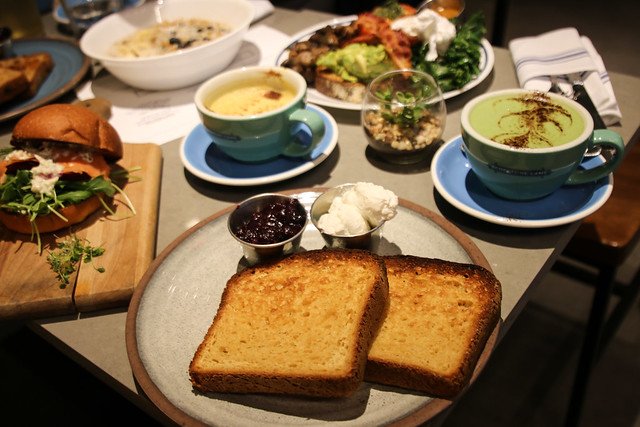 We shared everything—ordering three entrees. The first was the Bluestone Lane Big Brekkie, the Aussie version of a breakfast platter, which is appropriately a hybrid between a British and an American breakfast platter. The enormous dish came with Smoked​ bacon, poached eggs, roasted tomato, grilled chorizo, avocado smash, sautéed kale, baked mushrooms & Balthazar toast. Every item on the plate was delicious—this is a great, hearty dish for anyone seeking to satiate their hunger while staying healthy. 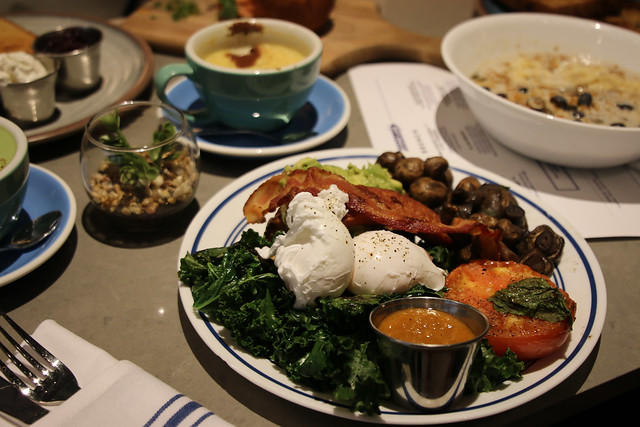 Now, given my recent visit to Australia—I happen to know there’s an acai bowl on nearly every brunch menu in the country. So, I was disappointed that the Bluestone Lane brunch menu lacked any acai, yogurt or granola bowls—nothing chilled. Instead, we chose the warm quinoa & oat porridge bowl. I was happy it was gluten-free—a warm, comforting porridge with sliced, warm blueberries. All in all, the dish was sort of bland, so I would not order it again. 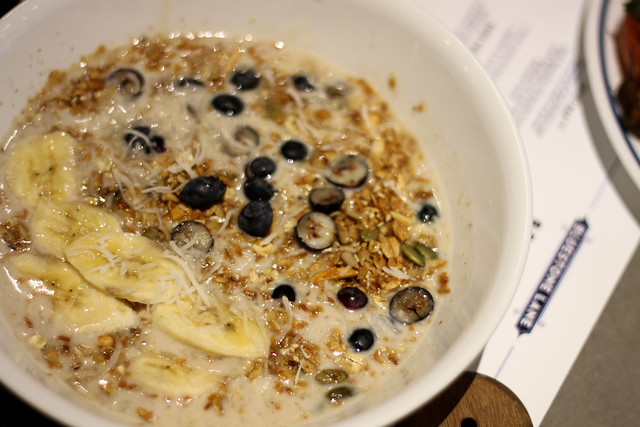 We shared the salmon brioche with herb crème fraiche, which is a creative brunch sandwich. The brioche was fluffy and soft, and it was served with fresh salmon, arugula, pickled beets, fresh dill, and a caper crème fraiche. It was fresh, flavorful, and satisfying—literally no improvements could be made on this sandwich. Moreover, it’s rare you get a fish sandwich—usually its meat or veggie, so we really loved this. 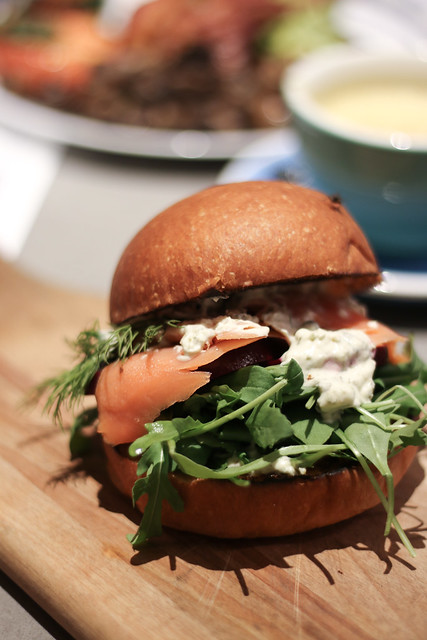 Last but not least, our server was fab-u-lous—he was attentive, accommodating, and had lots of personality. He made the experience absolutely lovely—and we’d love to brunch with him again! 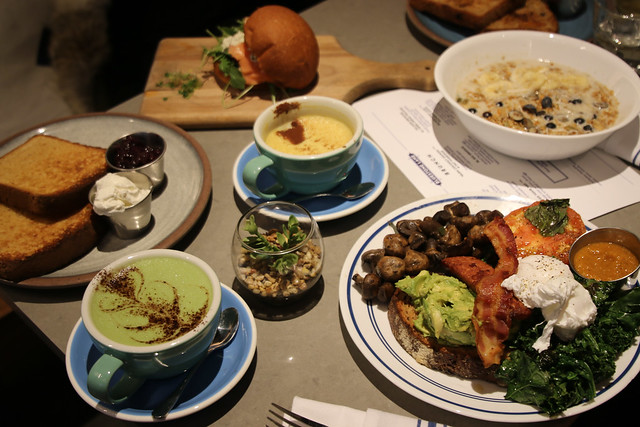 The Bitches say: B+. We love the lattes and the healthy options at Blue Stone Lane. The food is darn delicious—but we wish there were some typical acai & oat bowls rather than porridge. The service was top-notch, but the lighting and décor at this location needs some work.

Bluestone Lane has multiple locations across Manhattan and one in Washington, D.C. We visited the Manhattan West location.