My former roommate, Kara, is no stranger to brunching with me. We’ve covered some serious ground together during my tenure in D.C., so she understands what brunching with a Bitch entails. No plate shall be devoured until it’s been perfectly positioned and photographed. It’s safe to say brunch during her visit to the Big Apple was a high priority. 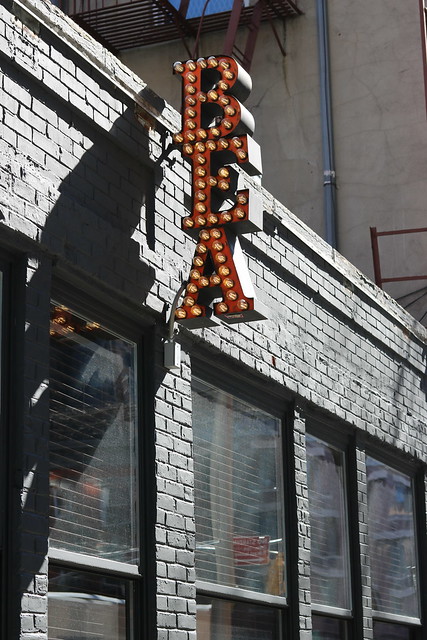 Finding nourishment locally seemed necessary given our escapades gallivanting around town evening prior. We walked a lovely block from my Hell’s Kitchen abode and landed inside  Bea. I had heard brunch at Bea is worth the $52 splurge for a bottomless brunch of unlimited small plates and free-flowing cocktails. You can also order a la carte with small plates and cocktails priced at $9. If boozing isn’t your thing, bottomless food is available for just $28. 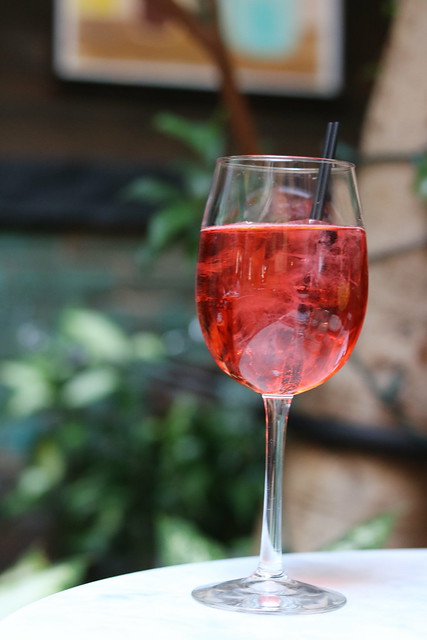 The inside of Bea is beyond absolutely adorable. The space is a gorgeous atrium with greenery that feels as though you’re basking outdoors in the sun. Old black-and-white movies are projected on a white brick wall for an added romantic ambiance. Cocktails were our first priority: I opted for a Venetian spritz with concocted with cava, aperitif, orange bitters, and simple syrup. Kara selected a classic mimosa in an effort to battle her hangover.

In true bottomless brunch fashion, we decided to order everything off the menu. First up, the salads. A pear salad with arugula, dates, and tamarind dressing for yours truly. Kara began with a kale Caesar salad topped with parmesan and croutons and drizzled in a house made dressing.  While I can always appreciate greens as a vegetarian, the salads are not a reason to visit. 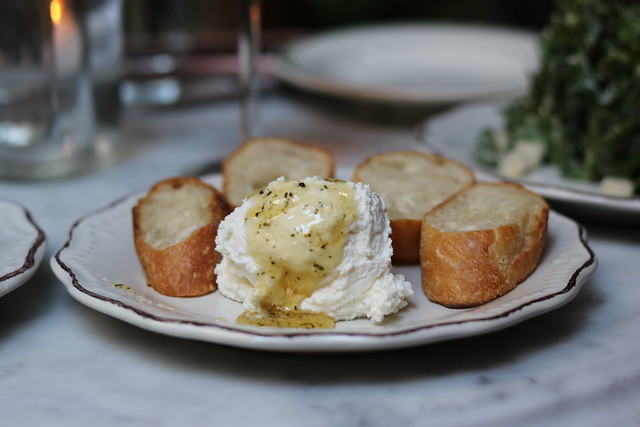 Next up the whipped ricotta came out with rosemary honey. The ricotta was unbelievably creamy and easy to mop up with grilled bread. The ricotta tasted so fresh and the honey drizzled on top only added to its appeal. 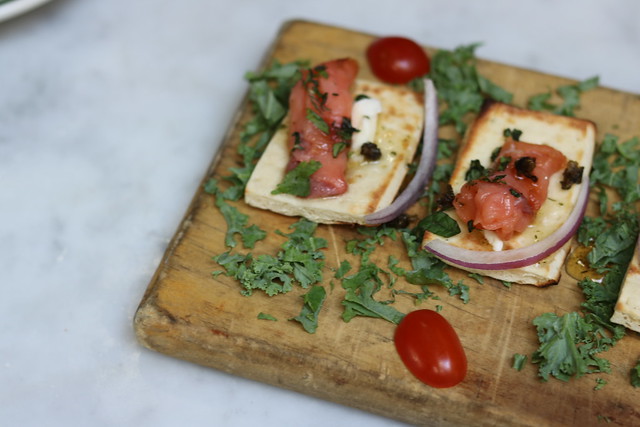 Kara raved about the smoked salmon served atop a wooden board. The salmon was fresh and tasty. She especially liked the flavors mixed with cream cheese, dill, honey, and mint.

Asparagus has always been one of her favorite vegetables, she was excited to try her favorite green veggie served with mushrooms and topped with white truffle oil for an elevated dish. The asparagus was long, but easy to cut through and eat. 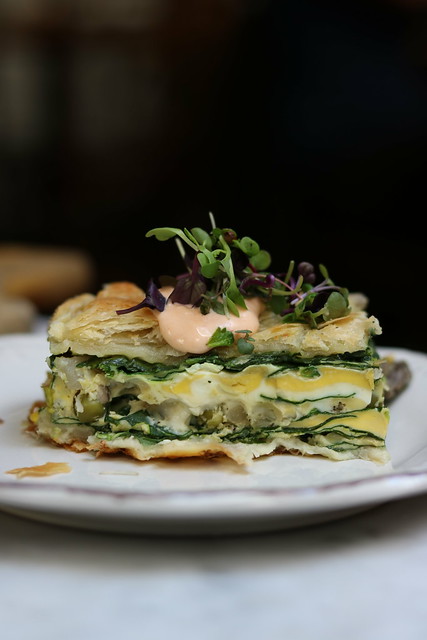 I had the spinach and egg pie next, which was served beautifully. The pie was light, airy and tasted fantastic. Layers of doughy spinach and egg were topped with creamy red pepper sauce. It was reminiscent of spanakopita which I absolutely love.

Next up the pork shoulder came out. Kara felt the pork was tender and moist which was important for her. The pureed kidney beans and pineapple sauce added for an interesting but enjoyable twist. 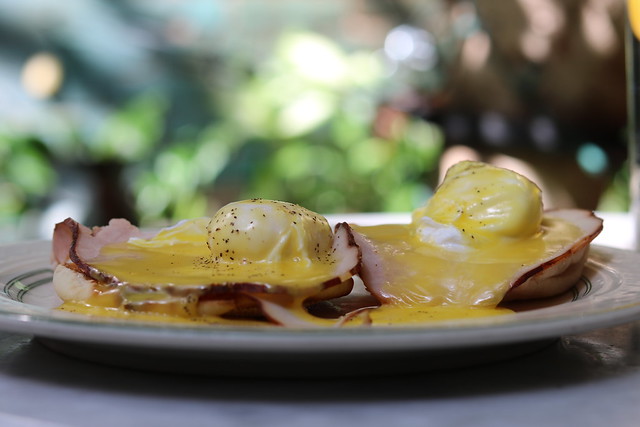 The eggs benny arrived next. It was a standard eggs Benedict with two halves of an English muffin topped with Canadian bacon, poached eggs and a hollandaise sauce. While Kara liked the benedict, it was forgettable.

Kara also dug into a side of the candied thick cut bacon. The bacon was incredible and crispy. The combination of brown sugar and maple syrup helped offset the spice from the chipotle kick. The bacon is a nice pairing to go with some of the other small plates. 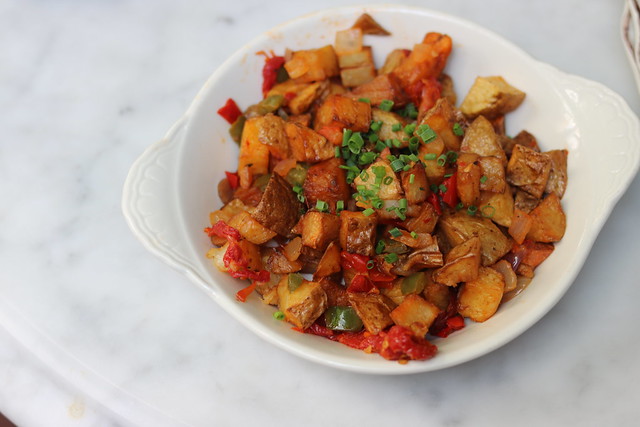 Breakfast potatoes were on my radar. The portion was much larger than we had anticipated. Yukon potatoes were cooked perfectly and seasoned with smoked paprika and garnished with thyme and rosemary for added flavor. I was in absolute potato heaven.

I was also due for another cocktail and decided to switch up with a tea cocktail. The tea thyme is an adorable tea-infused cocktail with zamaca, thyme liqueur mist, and San Pellegrino Limonata.

At this point, we were beyond stuffed and the sun was really coming down on us. We decided to share the baked scrambled eggs. The tomato sauce was packed with flavor, and the eggs were fluffy and cooked well. 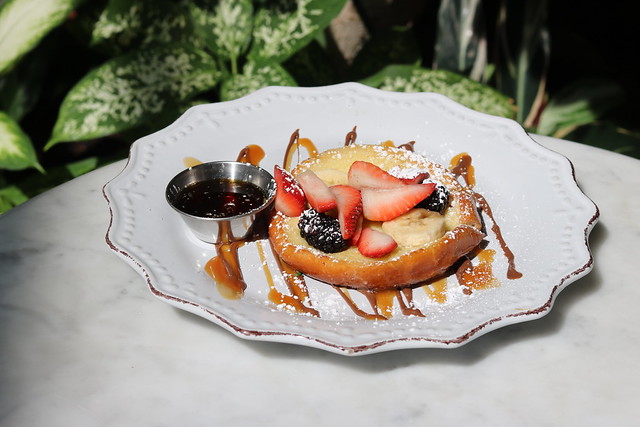 Lastly, we were due for cold brew and a brioche French toast with Nutella, bananas, and berries topped with caramel and maple syrup. I could only muster up a bite but Kara managed to sneak in a few bites before we ventured off to the Highline.

The Bitches say: B+ for a delicious bottomless brunch with classic small plates in an adorable space.

Bea serves brunch on Saturdays and Sundays from 11 a.m to 2 p.m