A while back, I was in Dallas, TX visiting a friend and staying at the Adolphus Hotel. Although a quick trip, I made the most of my 24 hours there. And while it was freezing here in Chicago, I was taking full advantage of the sky-high Texas temps and spent the majority of my day lounging poolside, snacking on yummy fare, and of course, drinking cocktails. I mean, I was fully committed to staying in the sun all day, and that is exactly what I did. My girlfriend, who is half-Mexican and a Texas native has a gorgeous tan year round, and I had some serious catching up to do.

Being the chatty Cathy I am, I of course talked up the lovely gentleman next to me. Nick, in town for his boyfriend’s work trip, was soaking up the sun and drinking cocktails too and well, we became instant friends. Finally, his boyfriend Josh, who had finished work meetings, arrived to join us and was ready make a day of it.

We were all chatting for what seemed like forever; talking about work, their life in Cincinnati, and both having Southern accents, where they were from. When Josh mentioned he was from West Virginia, I couldn’t believe it, and come to find out he was from the exact same town where I spent my freshman year of college at Marshall University; Huntington, W.V.

We instantly bonded over the extremely rare coincidence. Eventually, the sun began to set, and we all had to head back to our hotel rooms to get ready for our respective dinner reservations. We decided though, that our meetup shouldn’t end here and agreed to have brunch the next morning. Unfortunately, our plans both changed, and we weren’t able to do brunch. 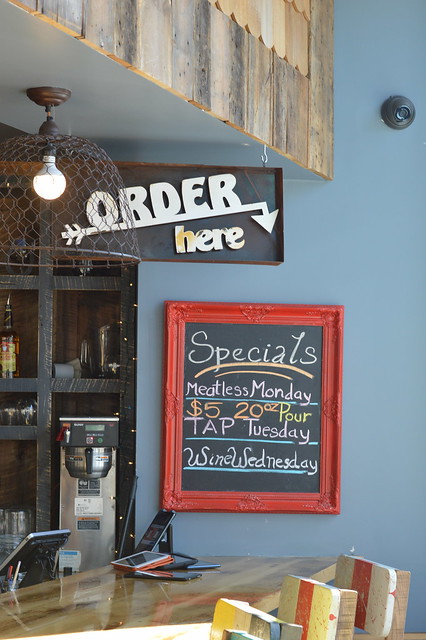 Flash forward to a year later, when with the power of social media came into play and the boys let me know they were in town for a quick trip and we agreed to brunch that Sunday finally! They were up in Lakeview for a meeting, so I decided to find a spot close by and decided on Bareburger, the flagship location of the NYC burger chain.

It’s a fairly casual burger joint that boasts organic ingredients, but I had seen that the restaurant also offered a brunch. When I saw a picture of the spread on Eater’s site, I was more than ready to check it out. 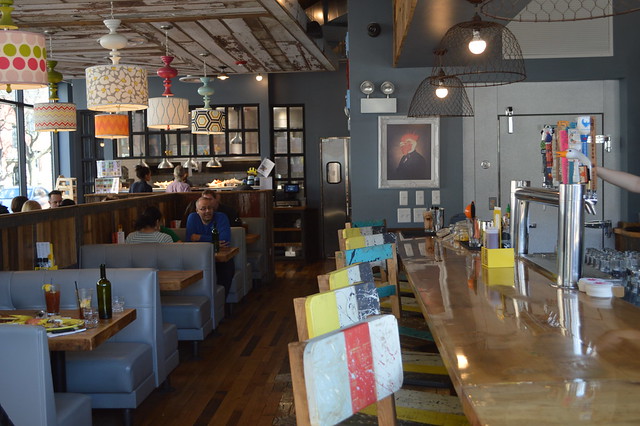 Bareburger looks like a plain old burger spot, and I was nervous that being the self-proclaimed brunch expert I am, that this casual burger place might not reflect my extensive knowledge of the brunch scene here in Chicago. Well, never judge a book by its cover, they say. 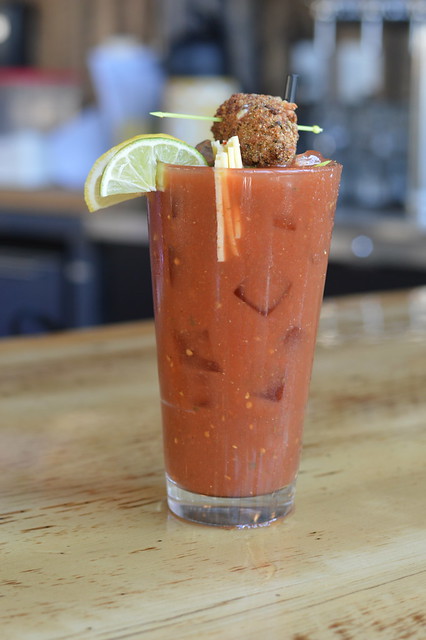 The restaurant is not fast casual, it is a full service restaurant. It was packed with both families and groups of adults brunching and boozing. We decided to settle in a booth and wait on our server to arrive as we perused the menu ferociously as we were all starving. The menu is quite extensive; not something that I would expect from a burger joint at all. Once greeted by our server, the boys both ordered Bloody Marys, while I settled on a $4 mimosa; how could I not? 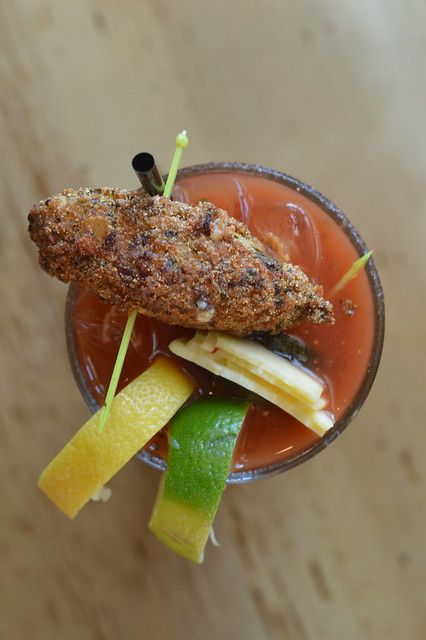 While my mimosa was not appealing, served in a glass filled with ice, the boys’ Bloodies looked incredible! Both Bloodies came topped with wedges of lemon and lime, a skewer of cheese, but the pièce de résistance was the fried jalapeno popper. Additionally, the house Bloody mix was great; spicy and savory. 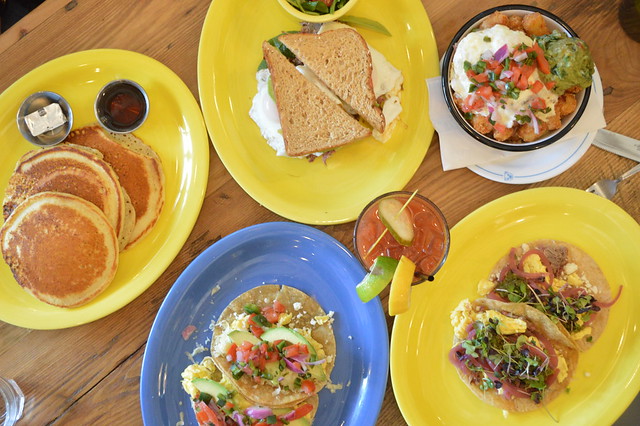 Starving, we ordered a number of items off of the menu. We all settled on savory dishes, but decided to also order some flapjacks to share. Nick had been eyeing the Breakfast T.A.B.L.E. Sandwich. Meanwhile, Josh was into the Tottie Too Hottie, and I was craving breakfast tacos. We really got a kick out of the names of some of the items; more on that later. 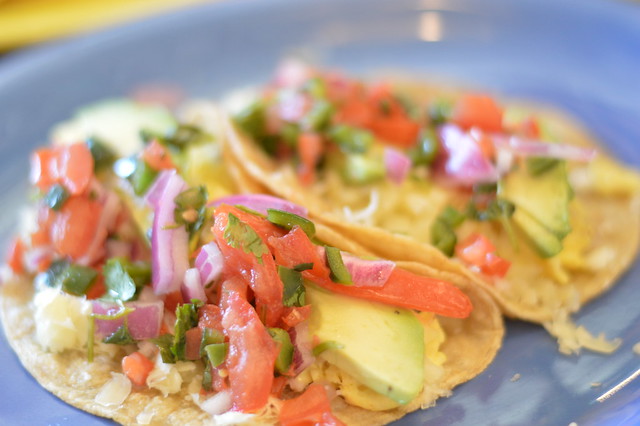 I decided to order two of the three types of tacos offered; the Eggy Pop and the Yolky Ono. See what I mean about the names? The Eggy Pop was two tacos with scrambled eggs, smoked brisket, queso fresco, pickled red onions, habanero mayo, and a salsa verde. The Yolky Ono was more basic, composed of scrambled eggs, aged cheddar, avocado, and a spicy pico de gallo. 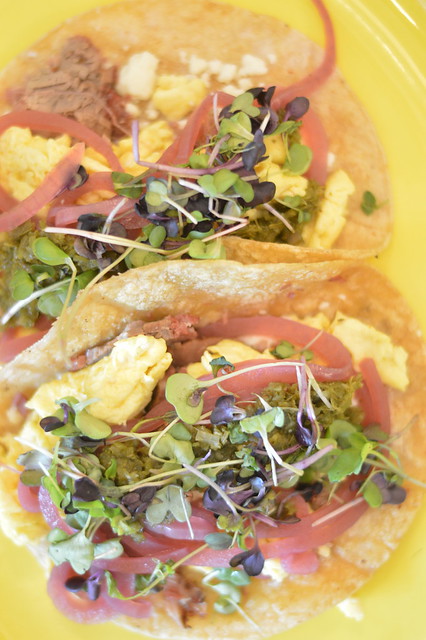 Both tacos were super yummy. Though the tortillas fell apart as can be expected from tacos, they were still delicious. My only complaint about the tacos is that menu has a surprising amount of Mexican-influenced dishes, but when I requested a side of sour cream the restaurant didn’t have it. I felt that sour cream should have definitely been an available condiment. 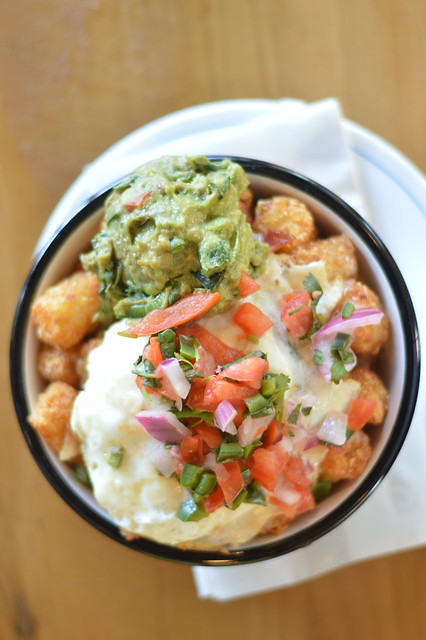 Josh’s Tottie Too Hottie were basically loaded tater tots topped with sunny poached egg, black forest bacon, queso fundido, guacamole, and a spicy pico de gallo. They were utterly delicious, and a large enough portion that he was able to share it with us. We all enjoyed it and agreed it was probably our favorite dish. 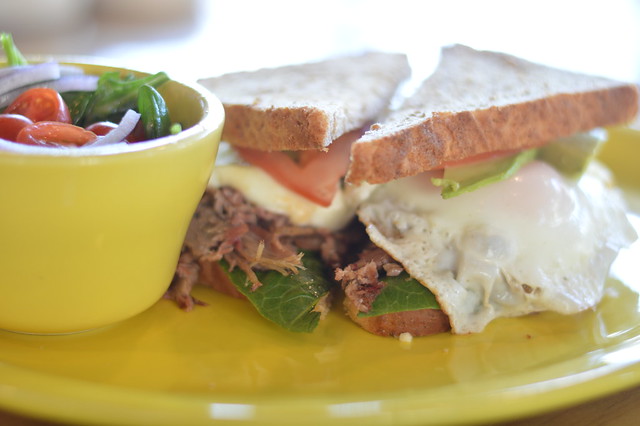 Nick’s Breakfast T.A.B.L.E. Sandwich came with two sunny poached eggs, smoked brisket, avocado, tomatoes, green leaf, habanero mayo, served between slices of eight-grain toast. Desiring to be a brunching Bitch, he was happy to give feedback on the sandwich as he was quite disappointed. With so many elements to the dish, he was stumped at how dry it was. The sandwich lacked the habanero mayo, the brisket was really dry, and the eggs were overcooked, in his opinion. Without the oozing of egg yolk, the bread was like cardboard and did nothing but add to the dryness of the sandwich. 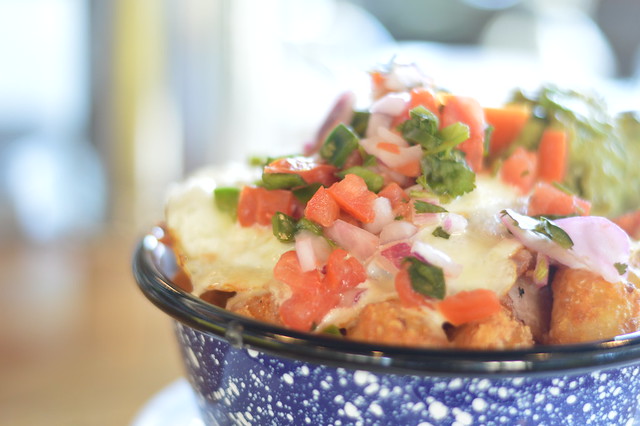 Despite the sandwich being a let down, we still enjoyed ourselves and were impressed with the brunch offerings. I will say our server was, for lack of a better word, what I called “spazzle-bedazzle” spacey. She wasn’t really on top of our order, and we waited a long time for her to deliver drinks or check back on us. She was very pleasant, though. I would come back again and refer friends to check this place out. I will definitely be back for the burgers.

The Bitches say: C. With room for improvement, Bareburger was by no means a complete let down; the Bloody Mary was one of the best bloodies I have ever had. The menu items are perfect for a hangover brunch with friends, or a great spot to take the kids, as I believe brunch is free for little ones.