“That was the best brunch I’ve ever had on the planet.” These are the exact words that left my mouth while getting up from our quiet patio table after brunching at Barano. If that doesn’t get you excited to read this review, I don’t know what else will.

I was initially hesitant to drag my boyfriend across the bridge to Williamsburg because he’s lived in Manhattan for over a decade and count the times he’s been to Brooklyn on less than one hand. I secretly hoped Barano would be our key to more adventures in this borough, and I can safely say my wish came true.

The Bitches were invited to try some of Barano’s new menu items when they recently decided to expand their brunch to Summer Fridays in addition to the traditional weekend offering– so smart. 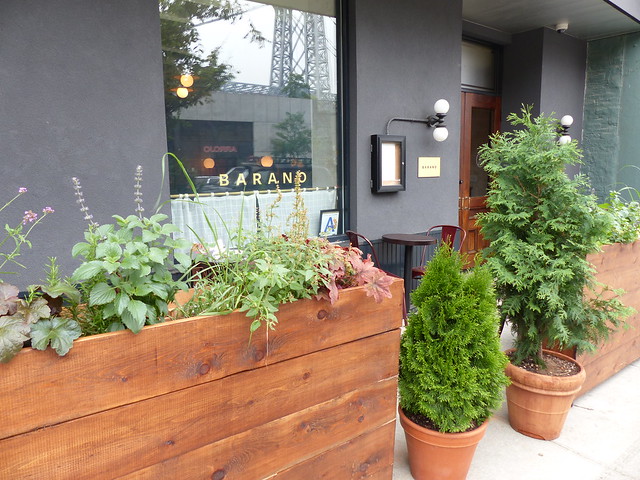 On this particularly cloudy afternoon, Tim and I walked across the Williamsburg Bridge and down Broadway to Barano, which we found quietly nestled on a corner close to the waterfront. Although the indoor portion of the restaurant was huge and homey, we decided to sit outside to take in the full BK experience.

We started off our meal with a round of cocktails (well for me it was a mocktail, but still I’ll pretend). My beau went for his go-to, the Bloody Mary. Barano’s version was super spicy in the best way. The spice mix was homemade and definitely had notes of wischeshier and horseradish. I had a virgin version of the “Who Is Your Daddy and What Does He Do?” cocktail. My cup came without the chamomile rum and instead had coconut mixed into the lemon, rhubarb, agave, and rosewater juices. This cocktail was inspired by a perfume the mixologist’s mother used to wear. It came with a rose shaped ice cube filled with dried rose petals that engulfed the glass as the cube melted. Not only was this drink stunning, it was absolutely delicious. 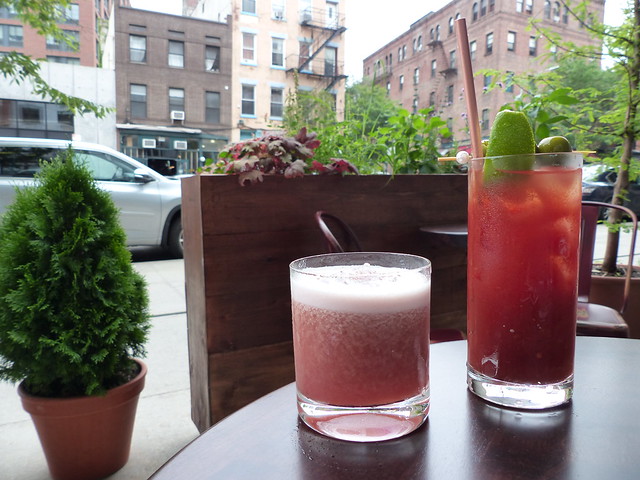 To preface, we ended up eating so much more than we expected to at Barano because they kept bringing out more and more tasty dishes to try, but we were so glad that we got to sample all of their hits. We began with a couple sweet starters. I was so excited to try their housemade granola because it came served over sheep’s milk yogurt. It’s so difficult to find dairy-free yogurts that actually taste good. It paired perfectly with the coconut and dried cherries in the granola and for added flavor, tons of fresh juicy berries and honey were mixed in. I’d love to eat this every morning for the rest of time. 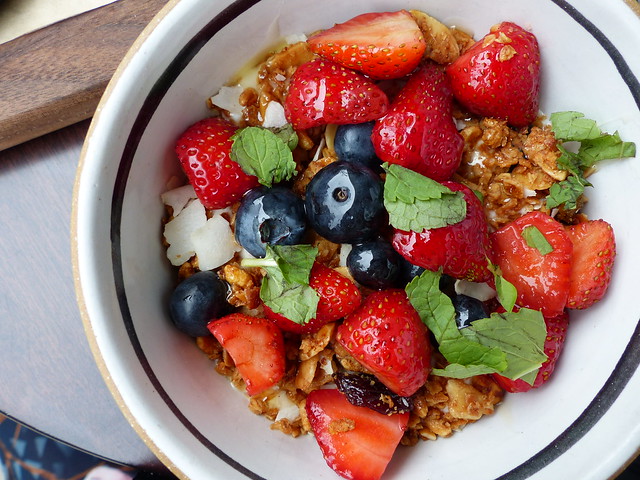 My beau insisted on ordering the pop tart. The flaky pastry came filled with a tasty, but not too sweet rhubarb jam. The amaro icing and sprinkle topping made us feel like kids again. 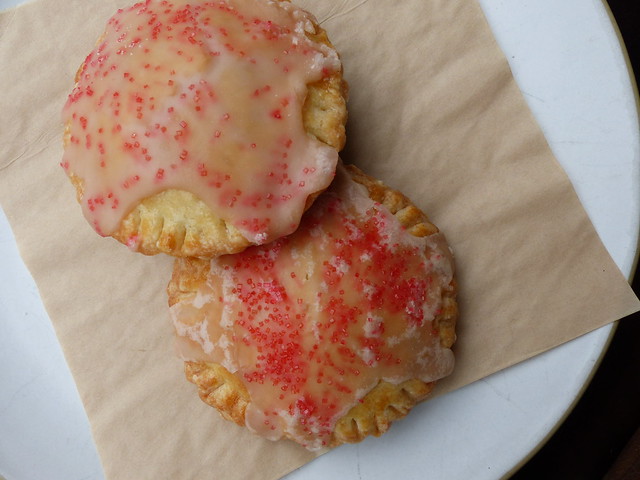 To our surprise, an incredible tableside smoked mozzarella display arrived at our table. We definitely weren’t mad about it. One salted and one freshly smoked mozzarella ramekin were served with the restaurant’s signature pizza bianca. The mozzarella is pulled right there in the kitchen so you can only imagine how incredible it was to slice and eat with the fresh, salted sourdough. 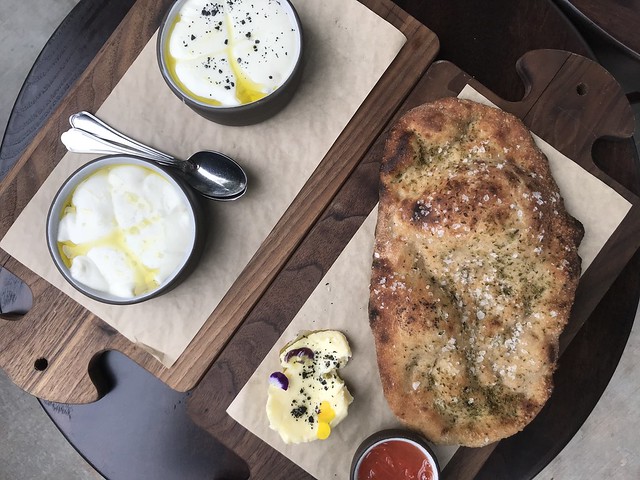 We were given the recommendation to definitely order the pancakes prior to our visit, so Tim had been fixated on his entree order for a few days. In front of him sat a stack of three fluffy semolina pancakes doused in lemon curd, berries, and a huge piece of vermont butter. If they weren’t already sweet enough, he drenched the hotcakes in maple syrup. I couldn’t believe how much he was able to finish on the plate. 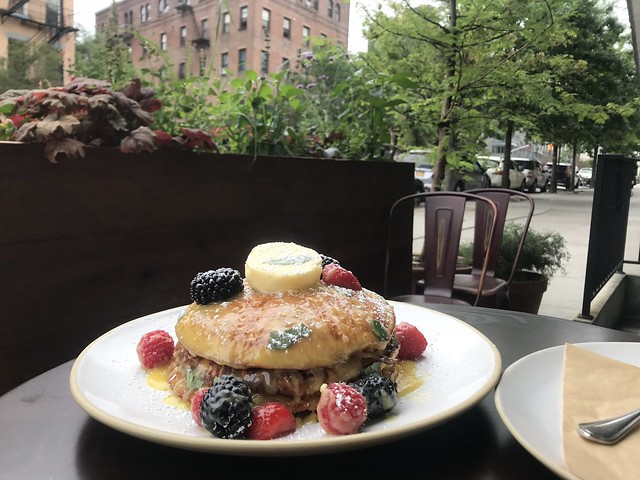 In preparation for my bridesmaid diet, I did not touch the pancakes and instead went for the asparagus milanese. The asparagus was cooked perfectly al dente. Eggs and asparagus are one of my favorite combinations, they just pair so well together. Beneath both was a yummy salsa verde, which I thought was an innovative touch to the dish.

Just when our food comas started to kick in, cue the smoked salmon pizza. I had originally wanted to order this because it was a new addition to the menu and I loved smoked salmon, but was trying to be good. So much for that. Instead of traditional sauce, this pizza had a lovely avocado mascarpone replacement. It was really refreshing since I usually order a white pizza anyway. Big, juicy sliced tomatoes were scattered about along with acme smoked salmon. The entire thing was sprinkled with everything seasoning, so this was basically just a delicious pizza version of the New York fave, bagel and lox. We took three-quarters of this pizza home cause we couldn’t let it go to waste. 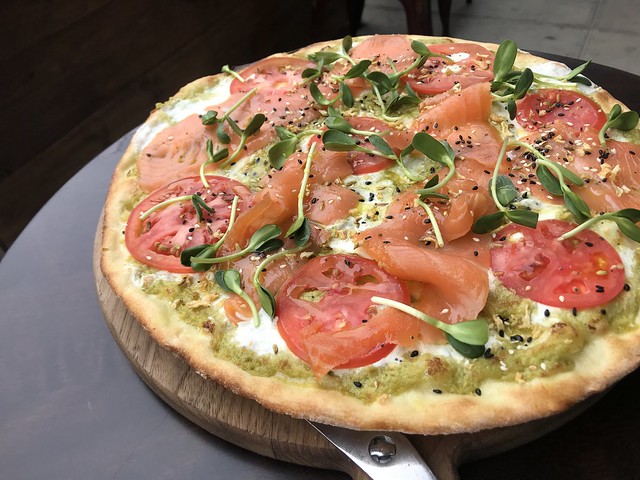 We spend the rest of the afternoon walking around Williamsburg, exploring the new Domino Park, and overall loving life thanks to Barano.

The Bitches say: A+. Barano clearly takes pride in their attention to detail. Every single thing from the decor to the cocktails to the ingredients are well thought out and well presented. Worth taking a trip to Brooklyn just for the meal.