Earlier this winter, I had a chance to finally get to Lovely: A Bake Shop in Wicker Park. I had read Alexis’ review and had the opportunity to visit after being invited to the holiday treats tasting.

At the tasting, I met Gina and Bob, the owners and baking extraordinaires who are behind the budding empire of the Lovely brand. During our conversation, I learned of their other restaurant ventures, one of which is Bakin’ and Eggs in Lakeview. Oh, and Bob and Gina informed me that there was brunch. Done!

New Year’s Day I brought seven friends to Bakin’ and Eggs for brunch. What better way to kick off 2016 than with seven of your best friends for brunch? 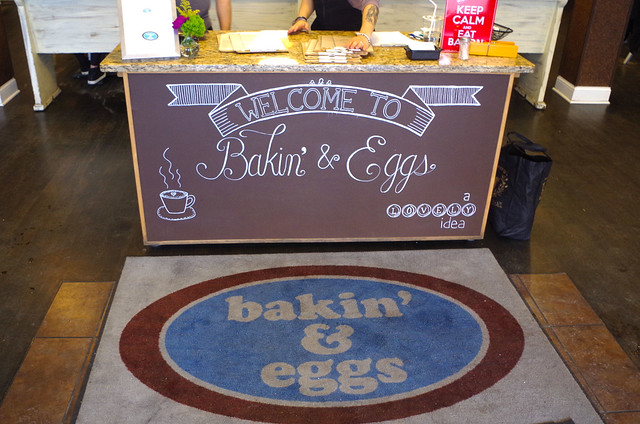 Bakin’ and Eggs is a bright, cute, and open restaurant and though it’s a deep space, it’s full of light. There is nothing worse than not being able to see what you’re eating and you certainly will not have that problem at Bakin’ and Eggs. Just like Lovely, Bakin’ and Eggs has a takeaway counter where you can order coffee, pastries, and other food from the menu to-go. 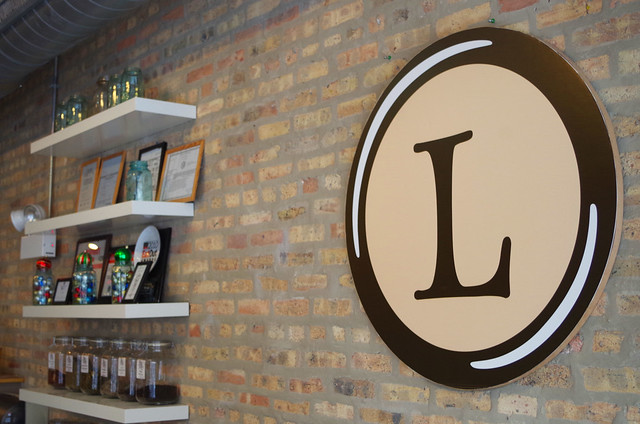 By the time we arrived, the place was packed with a short wait list. Fortunately, I had made a reservation for our large party in advance. Within five minutes of our arrival, we were seated at a huge stand-alone table right in the front of the restaurant’s floor to ceiling windows. 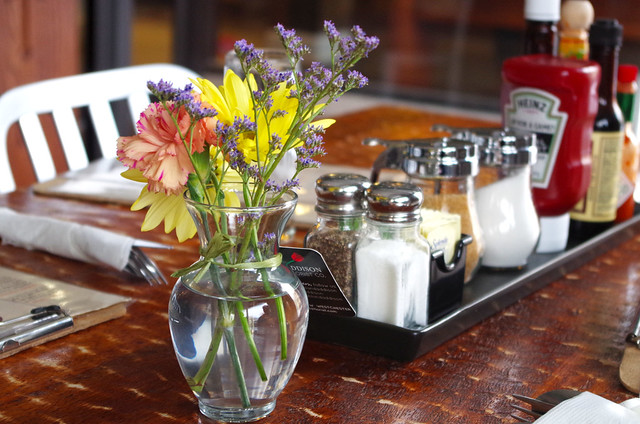 Once our entire party arrived, our delightful waitress greeted us and gave us a run-down of the menu. Her helpfulness and sunny disposition definitely added to our experience—we all loved her! She was great with entree suggestions and was keenly aware of my allergy situation so she won big points in my book. 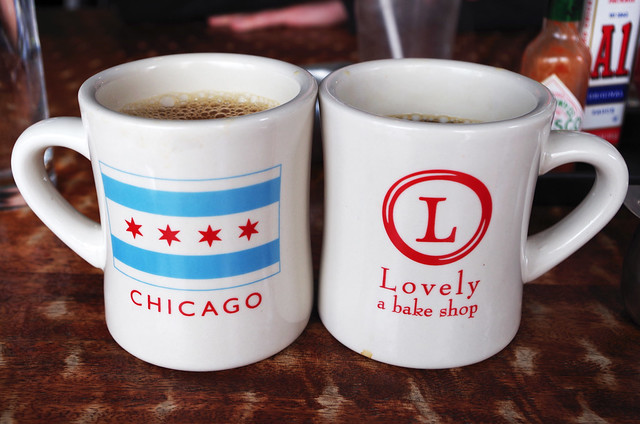 With any brunch, the best way to start is with drinks. Being that the night before was New Year’s Eve, we decided to stick with non-alcoholic beverages. Colleen, Mike, Sarah, and I went for the classic hot coffee. We liked the blend, which was served with its own individual creamer and assortment of sweeteners. The mugs also added their own bit of charm by being decorated with the Chicago flag on one side, and the Lovely logo on the other—how lovely! 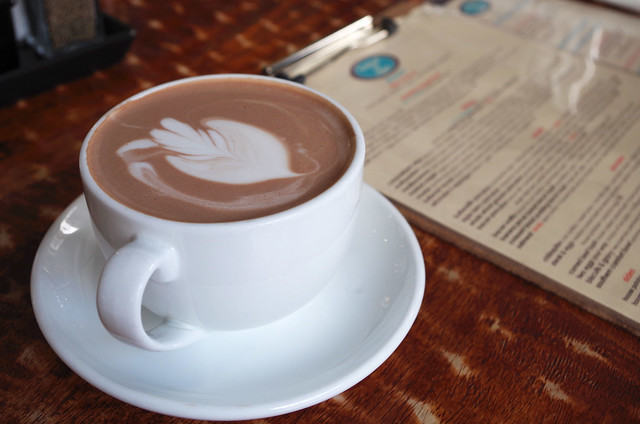 To change things up, Britt ordered hot chocolate made with dark chocolate mocha and steamed milk. It was creamy, and delicious—but heavy. It was almost the kind of drink you’d get for dessert, as the beverage was so big it could be a meal. 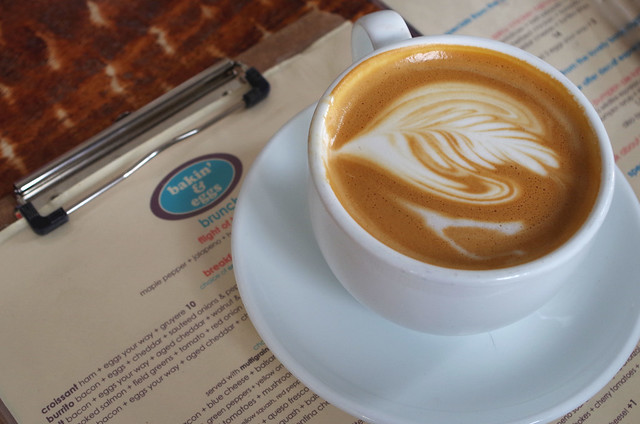 Ashley decided to try the New Orleans latte. It was nutty and smooth with chicory syrup and the design was much appreciated, and made for the perfect Instagram. Insta-worthy beverages are always an A+. 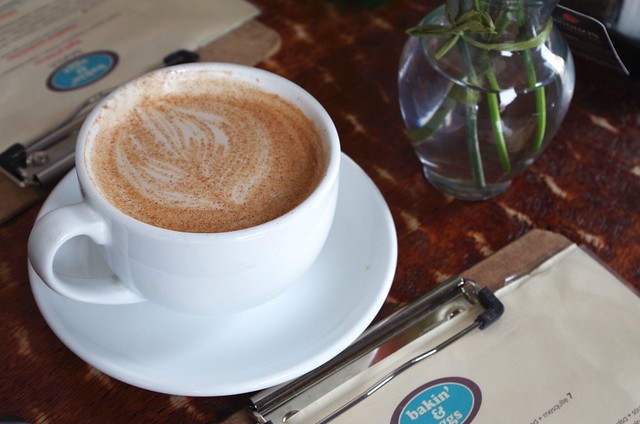 Keeping with the latte trend, Jennie ordered the chai tea latte with skim milk. It was smooth, and the perfect amount of cinnamon.

Being the big kid of the group, Ryan ordered the chocolate milk. When it arrived at the table, he took a big gulp before I could even snap a picture—he’s still a bit new to brunching with the Bitches, so I gave him a pass just this once. Ryan was a bit disappointed by the chocolate milk—it wasn’t rich enough for his palate. 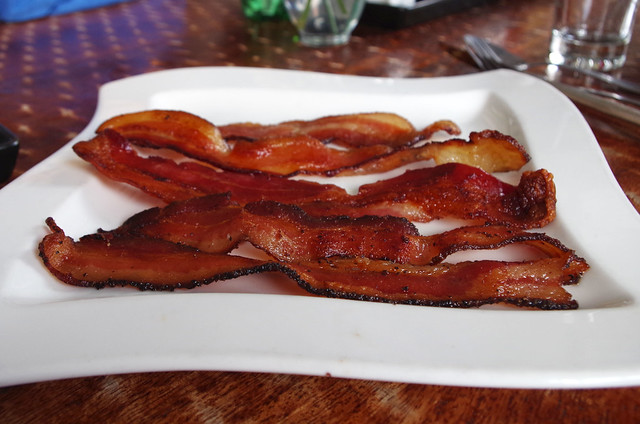 This group likes to eat, which is one of the things I love about them. So when it was suggested to order an appetizer, there was a unanimous “Yes!” We decided on two orders of the bacon flight to split between the eight of us.

There were five different kinds of bacon in the flight: maple, pepper, jalapeno, honey, cherry smoked, and mesquite. I don’t discriminate when it comes to bacon. I will never, ever say “no” to bacon, but if I had to pick favorites, I’d say I liked the zing of the jalapeno and the sweet maple. I think all of us had different favorites, but that just goes to show that all of them were that good! 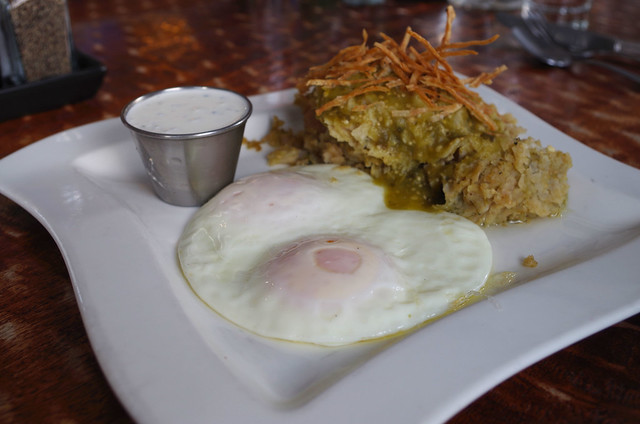 When it came to entrees, we all ordered a variety dishes so we could best survey the extensive menu at Bakin’ and Eggs. For Britt, she ordered the chilaquiles but wasn’t exactly pleased with her choice. The chilaquiles came in a different presentation than she was used to and were a bit dry. The dish was spicy and filling, but Britt felt the dish was a miss with presentation and taste. 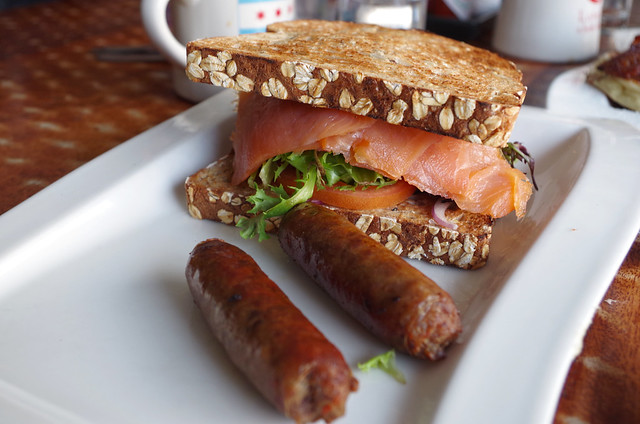 Ryan stepped outside his comfort zone and ordered the SLT, a sandwich with smoked salmon, field greens, tomato, red onion, and chive cream cheese spread on toasted five grain bread. He also ordered a side of two over easy eggs. This sandwich sounded amazing—I love smoked salmon! But Ryan didn’t really enjoy the sandwich since he isn’t too keen on smoked salmon. Next time, he’ll try something different, and I’ll get that sandwich! 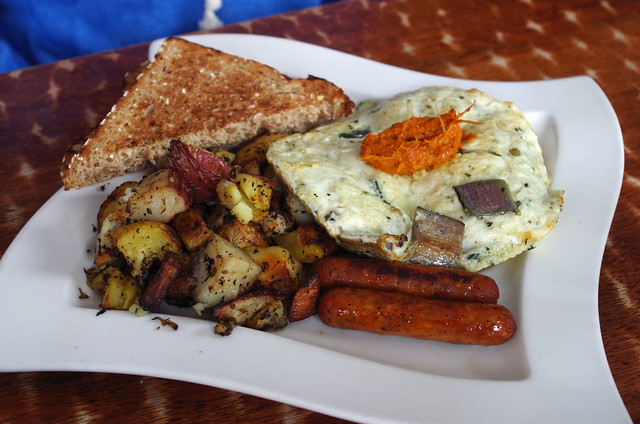 Jennie, our healthy friend, ordered the roasted veggie frittata. She loved it! It looked like it was going to be a solid dish when it was brought to the table, and sure enough, it was. The frittata was light, fluffy, and filling since it was stocked full of eggplant, zucchini, yellow squash, red pepper, red onion, and herbs de Provence. The toast on the side was perfectly toasted. It looked like an incredible meal, and Jennie needed a nap after that dish. 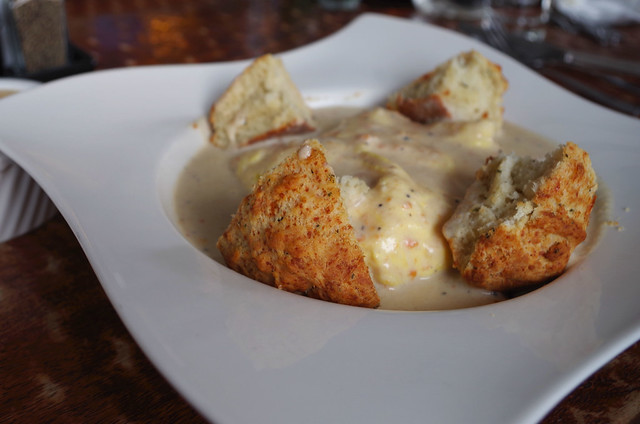 Both Ashley and Sarah opted for the Southern comfort bowl with scrambled eggs and cheesy grits on the side. This dish was full of chicken sausage, potatoes, cheddar cheese and herb rosemary biscuits. “It’s biscuits and gravy on crack,” said Ashley. Got it. They both enjoyed the dish immensely. 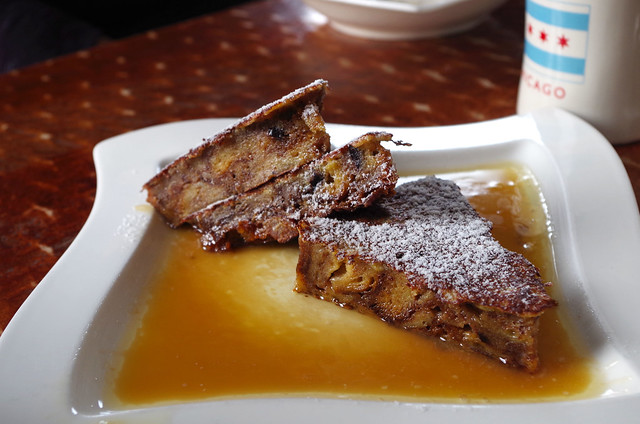 Colleen ordered the croissant bread pudding French toast. I immediately noticed how dense the bread was—it was about an inch thick. The dish arrived drenched in syrup. Colleen said it was delicious and worth every carb. 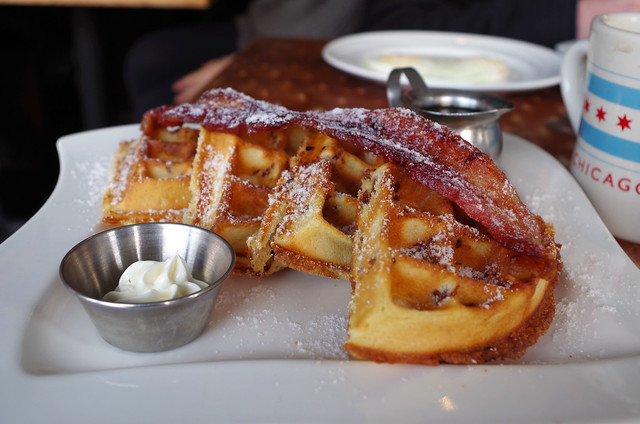 Mike decided on the bacon waffles, which are waffles filled with tiny bits of bacon and topped with strips of bacon. Drool-worthy description, that is if you’re a bacon fan. He ate the entire dish, so it’s safe to say that he liked it and would order it again. 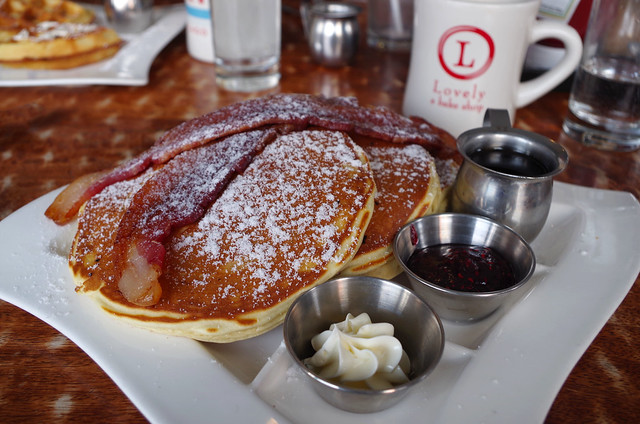 Following Mike’s lead, I ordered the bacon pancakes. Who would say no to trying pancakes with bacon in them? The pancakes were delicious. Pancakes can often be dry but these were fluffy and moist. They were served with butter, jam, and syrup.

Bakin’ and Eggs is a casual restaurant with all the makings of a go-to brunch spot if you live in the Lakeview area. The food was delicious, the staff was helpful and friendly, and it was a wonderful, spacious place to eat with a large group of rowdy friends.

Bakin’ and Eggs serves brunch every Saturday and Sunday from 8 a.m. to 3 p.m.