Baar Baar is one of my favorite restaurants in the city. That’s a hefty claim for a food blogger to make, especially in New York where everything is at your fingertips (or a train ride away). Baar Baar is a trendy Indian gastro bar in an even trendier neighborhood off East Houston Street. In fact, it’s located right off Extra Place where yours truly belongs. 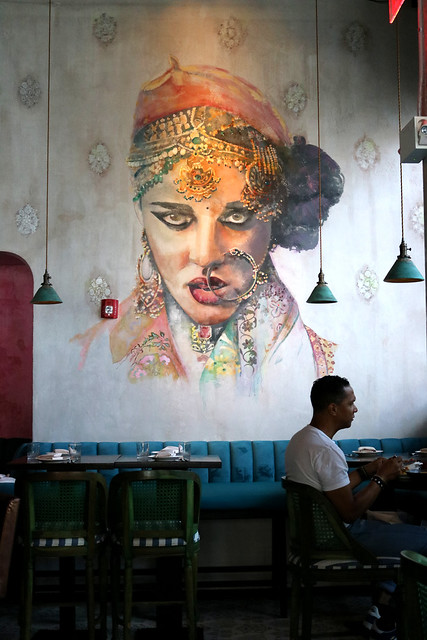 When you walk into Baar Baar, you’ll be greeted by an edgy mural of a woman decked out in ethnic Indian wear. The space is rather large with teal plush booths and a vast array of seating. Baar Baar offers one of the best brunch deals we’ve seen. You have an option to choose off of a prix fixe brunch menu for $35 per guest including one main, one side, and your choice of mango lassi, a mocktail or soft drink. If you prefer your brunch on the boozier side, the $52 pre fixe option includes one main, one side plus your choice of bottomless mimosas, sangria, or Bellinis for 2 hours. 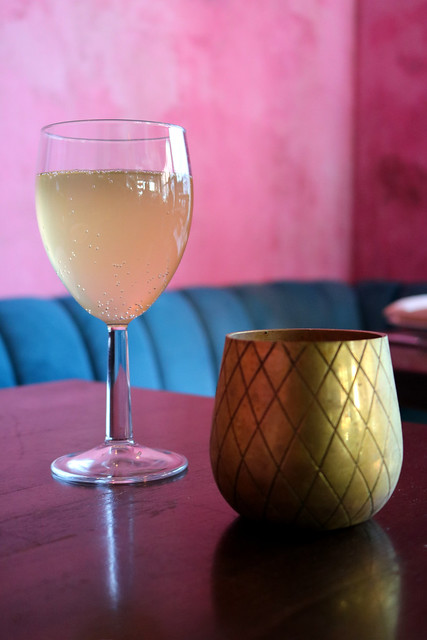 First up drinks were in order. I opted for a mimosa with passionfruit juice while my brunch date stuck to a traditional mango lassi. The mimosa was perfection and a nice change from a traditional mimosa. The mango lassi was a bit sweeter than we would have liked but nonetheless it was fresh and flavorful.

Baar Baar has live “bolly jazz” as they call it during brunch, which we were totally feeling. A classical Indian singer plays pop Bollywood hits and some oldies. They even take requests, which we loved. Each song I heard reminded me of sweet moments from my childhood and clips from Hindi movies my parents tried to get me to watch. 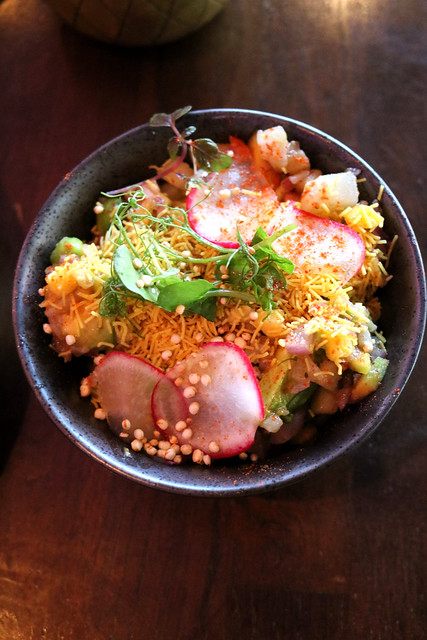 We decided to share everything and began with a green chickpea and avocado bhel. Being Indian, I’ve had more bhel in my life than one can count. The portion was larger than expected for a side. The bhel was refreshingly different than your norm. We loved the combination of tomato, onion, radish, cilantro, avocado, and chickpea topped with crispy sev and dressed in a light tangy chutney. 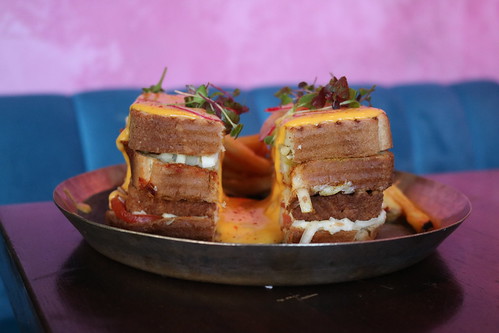 I couldn’t contain my excitement in trying the grilled Bombay sandwich. It was triple layered and drizzled in gooey cheese with a side of masala fries. The sandwich was overwhelming to eat at first, but we quickly realized we could deconstruct it into more manageable bites without sacrificing the taste. The sandwich was unbelievable and filled with spiced potatoes and mint and cilantro chutney in true Bombay sandwich form. 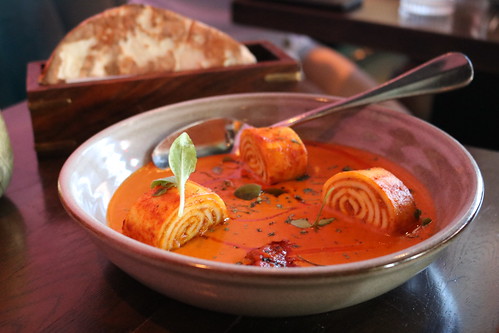 It’s not a true Indian meal for me without some hint of paneer. We decided to share the paneer pinwheel which comes with your choice of saffron rice or naan. We opted for the saffron rice to eat with the red pepper makhani. I had tried the paneer pinwheel previously at dinner, so I was looking forward to having this again. The dish was sweeter than I had remembered but we still enjoyed it. The pinwheel was a unique way to serve paneer, as it’s typically just cubed. We ordered a side of chili cheese naan which was so delicious for mopping up the spicy red pepper makhani.

The restaurant was packed to the brim with brunch dates, large groups, and families. The music only made it more fun and even livelier than expected.

The brunch deal is worth it and there are plentiful of options especially if you’re vegan or a vegetarian. We’ll certainly be back for brunch to try the rest of the menu.