Who is Aunt Jake? Does the bright, charming two-floor townhouse in the Village belong to her? Perhaps Aunt Jake is more of an uncle (bisect the name and it could read either way). I couldn’t get a straight answer about Aunt Jake’s identity out of the restaurant either, but I honestly don’t care. Aunt Jake, whoever you are, I’m just happy for the brunch invite to your warm and inviting space. 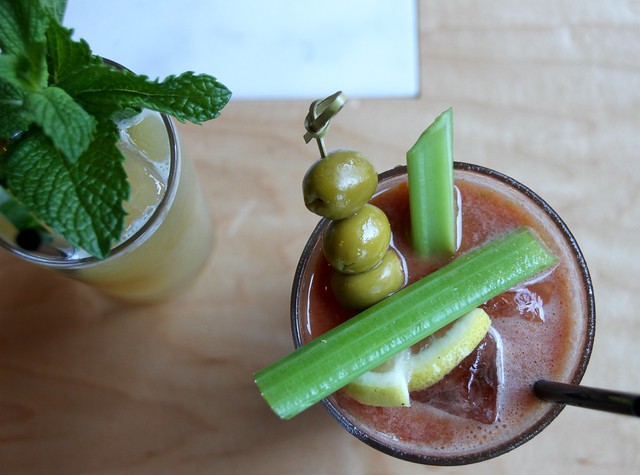 My visit to Aunt Jake’s began as any visit anywhere should—with a cocktail. We sat by the window facing 8th Street, and my BGOTD (brunch guest of the day), Christy, chose first, opting for the Green Side, a concoction of vodka, green juice, and lemon. Lacking anything resembling a sweet tooth, Christy really enjoyed this tasty, well-balanced drink—so much so that she ordered a second round. And hey, green juice is healthy, right? We were off to a good start. 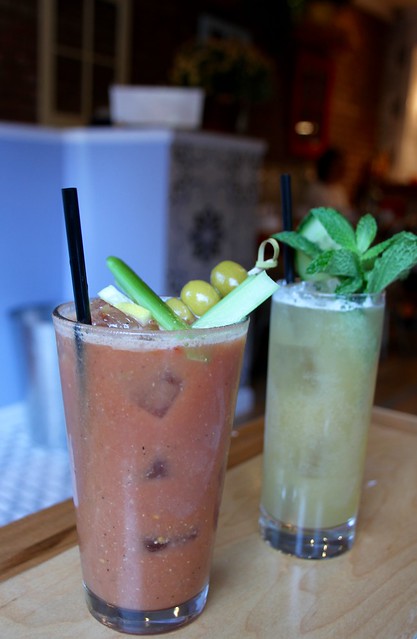 When my Bloody Mary arrived, I was struck by its unusually light color—rather than the typical fire-engine red, it more closely resembled muted brick—which might have been due to the addition of mustard.  There was a lot going on in this drink, and thanks to the horseradish and spices, it was chunky, flavorful, and strong, though not as spicy as some might like. It took me the whole brunch just to nurse one glass. 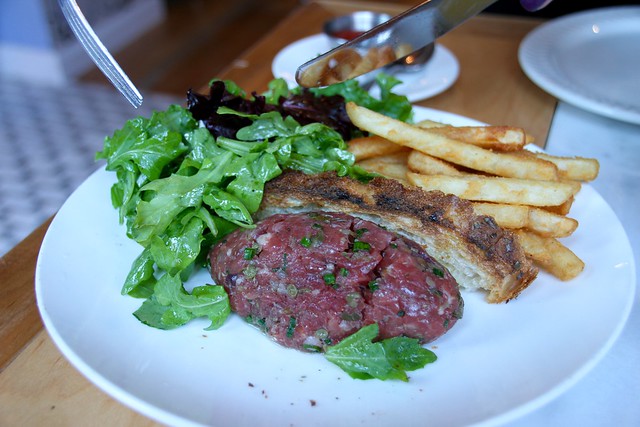 We began our meal with the steak tartare—this version an orb-like shape mixed with chopped capers, cornichons, shallots, and olives. Bright and tasty arugula and perfectly crisp French fries played a supporting role to the tartare, which originally came hidden underneath two pieces of toasted bread. I’m not a fan of olives, so their addition came as a bit of an unwelcome surprise for me (they weren’t listed on the menu), but overall the flavors complemented each other nicely, and I really enjoyed the dish as a whole. 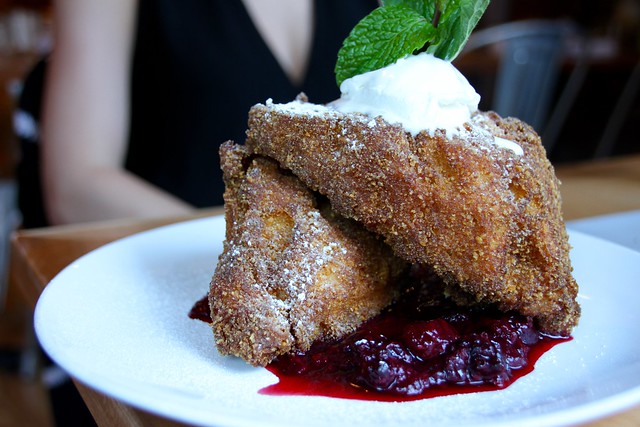 Per our waiter’s recommendation, Christy went with the cornflake-crusted French toast, a dish he promised wasn’t overwhelmingly sweet despite its generally saccharine reputation. And the waiter was right. Christy loved this classic brunch entree which, texture-wise, she compared to fried chicken: crispy on the outside, soft on the inside. I nabbed a few bites and can vouch for her comparison. Aunt Jake’s got this one just right. (She also loved the side of bacon she ordered, so much so it was gone before I could even snap a photo.) 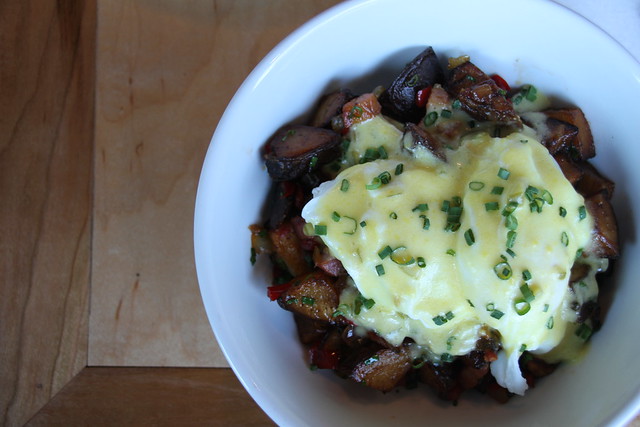 In the mood for comfort food, I went with the porchetta hash, which came out of the kitchen salty and piping hot. The savory combination of poached eggs with Calabrian chile hollandaise, roasted potatoes, and big chunks of porchetta is something I could see myself eating every weekend. Each bite of salty, fatty goodness just seemed to hit the spot. Hot sauce could have upped the ante here and really made this dish stand out (at least to spice fiends like myself, but the restaurant stopped making its in-house hot sauce when it changed its menu. Lesson: Never leave home without hot sauce in your bag (swag) like Queen Bey. 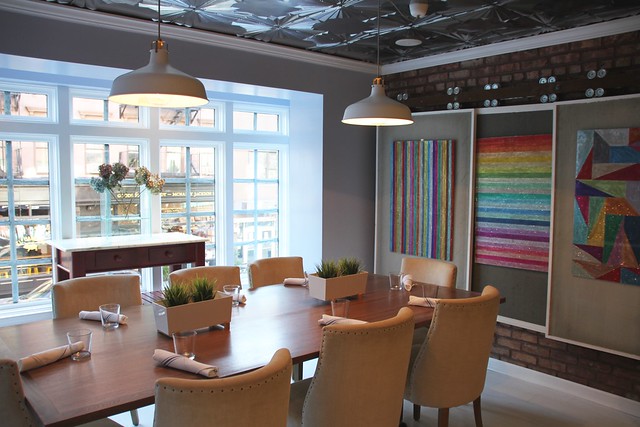 After eating, our waiter took me on a tour of the second floor, a really lovely space with room for big groups to dine (I love this family-style table shown above) and fun art on the walls—much of it for sale. The tour was the cherry on top of an afternoon of good food and good service. This location of Aunt Jake’s just opened up in September (it was previously known under a different name) and is still relatively quiet, but I expect that won’t last for long, especially in a neighborhood as busy as the Village.

The Bitches say: Five Champagne Flutes. This upscale casual restaurant in the Village is a welcoming, comfortable spot to indulge in tasty brunch classics with an Italian spin.

Aunt Jake’s serves brunch on Saturday and Sunday from 11 a.m. to 4 p.m.