Summer is winding down, but don’t worry! You can experience summer vibes all year long at Atlantic Fish Co.’s brunch. I didn’t even know they served brunch until a couple of weeks ago, but before I even dive into the review, stop… open a new tab, and make a reservation. You will be happy you did by the end of this.

Alright, now that your reservation has been made, let’s dig in. I dined at Atlantic Fish Co. around 11:30 a.m. on a Sunday morning. The outdoor patio was almost full, and I was thankful that the perfect table opened up. I am trying to get as much sunlight as I can before the temperatures drop and the cold fronts move in. 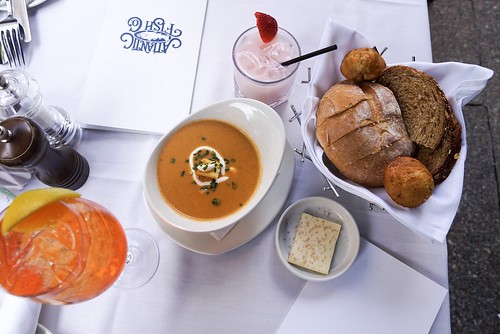 My friend Elizabeth and I ordered drinks and were pleased when the waitress, Emily, asked if we wanted bread. I am not one to say no to carbs, so I was thrilled when a basket of assorted breads and a couple of mini muffins arrived at the table with a cute dish of butter that had pink salt sprinkled overtop. The drinks arrived moments later; a summer spritz for me and a liquid parfait for my friend Elizabeth. The two drinks were quite different; the spritz was refreshing and packed with citrus flavor, and the liquid parfait was sweet and creamy. 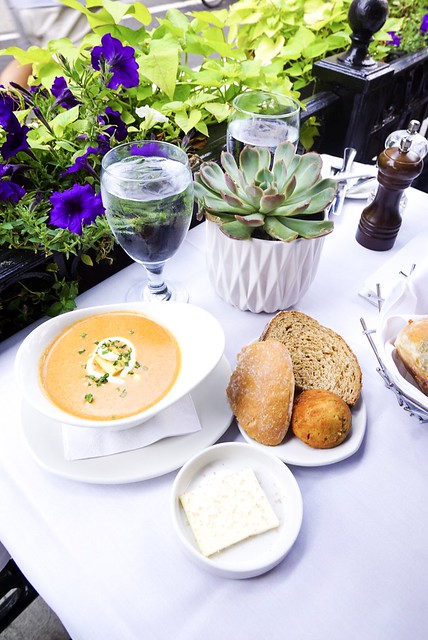 We nibbled on bread while waiting for a lobster bisque to share. The basket has a couple of different kinds of bread, and the butter did not disappoint. I probably would not order lobster bisque as a brunch appetizer on a normal occasion, but I was at a seafood restaurant so it seemed fitting. My first impression of the lobster bisque was that it was salty, so if you are sensitive to salt, I would not recommend. However, if you put salt on everything, then you would enjoy it. I would recommend saving some bread for the bisque. The lobster pieces were a generous size, and the bisque itself was not too thick. I appreciated the consistency and would have finished the dish if the saltiness was taken down just a notch. 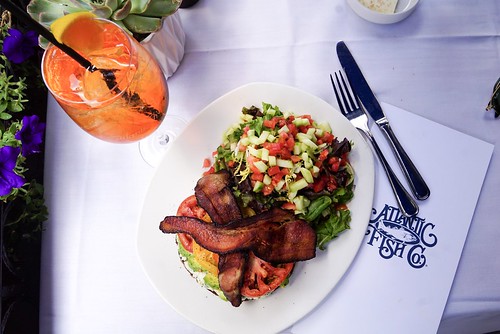 My eyes were not going to look past the avocado toast on the menu, and as it was brought to the table I knew I made a fantastic decision. Fresh avocado spread across a fresh piece of toasted bread and topped with sliced tomatoes, bacon and burrata… yes, cheese on avocado toast! The toast rested next to a side salad with light dressing. I am normally left disappointed when only one piece of toast is served, but this toast was large, packed with toppings, and the salad was a an excellent pairing made by Executive Chef Dan! If you are looking for avocado toast that will hold you over for hours, do not look any further. 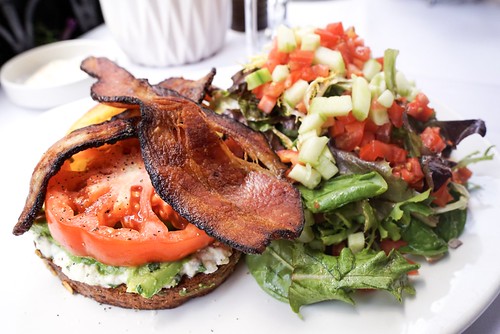 I love seafood, but Atlantic Fish Co. has options for anyone who doesn’t. I could not leave without trying their lobster roll, and I also had my eyes on the crab cake Benedict. They offer a lobster Benedict as well. As much as I love lobster, I didn’t want to overdo it. Elizabeth had her eye on the French toast. We placed an order, and while we chatted we sipped on a Bloody Mary and a rosé spritz. 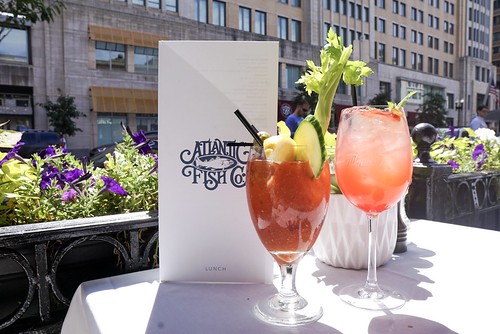 The Bloody Mary was topped with a jumbo shrimp and some other garnishes, and the rosé spritz made me sad that summer is coming to an end. I loved the strawberry purée with added flavor of mint and lemon. I would never normally order a drink with gin but the taste of Hendrick’s was completely masked. This might be a pro or a con for you depending on your taste, but I was a fan. People watching is one of may favorite activities, and I could have sat on the patio watching people scurry down Boylston Street all day. Before I knew it, our meals arrived at the table, and I laughed staring at the amount of food I was about to dive into. 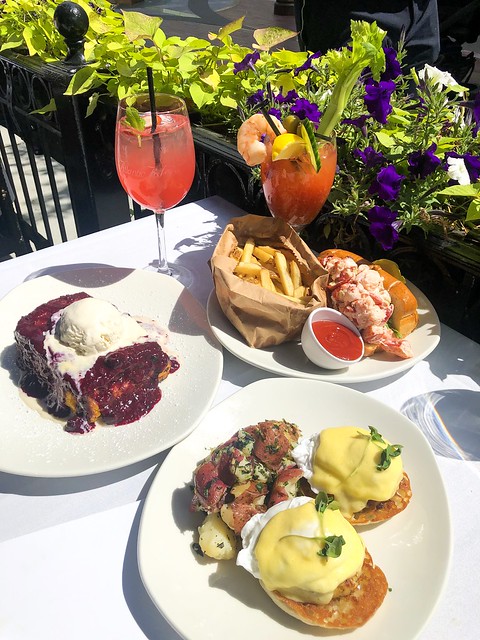 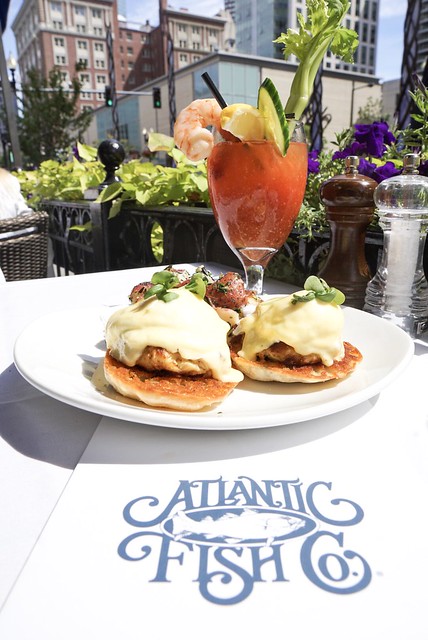 I could not decide what to stick my fork into first so I started with the crab cake Benedict. The English muffin was grilled with butter. I want all of my English muffins grilled… they just taste so much better. The crab cake was petite and fresh, like all of the seafood here. I was happy that the outside was browned, and the light coating of hollandaise sauce was just the right amount. The potatoes it was served with were seasoned with rosemary and some other spices. Overall, this dish was well-plated and perfect for those looking for a seafood twist on a traditional breakfast. 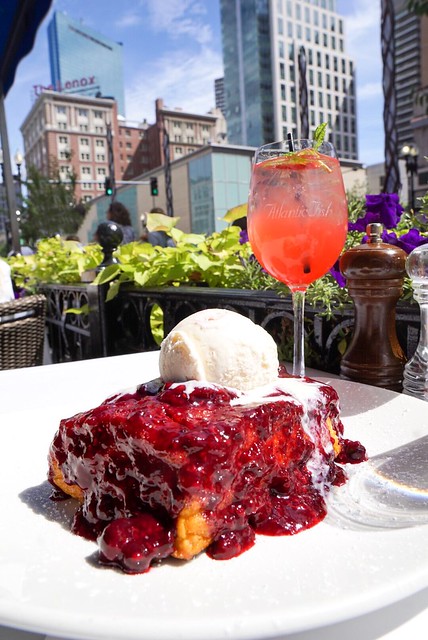 I would never imagine that I would find the French toast of my dreams at Atlantic Fish Co. This French toast was a slice of heaven topped with a berry confit and ice cream. Yes, you read that right: ICE CREAM! ON FRENCH TOAST! This is something I could eat every day. Don’t worry – I won’t eat it every day, but I’m just saying that I totally could. I need to know what bread is used in the creation of this masterpiece. I asked, but my waitress did not kn0w (I feel like it is a secret). If you don’t want a whole piece for yourself, share it with the table because you will want at least a bite. 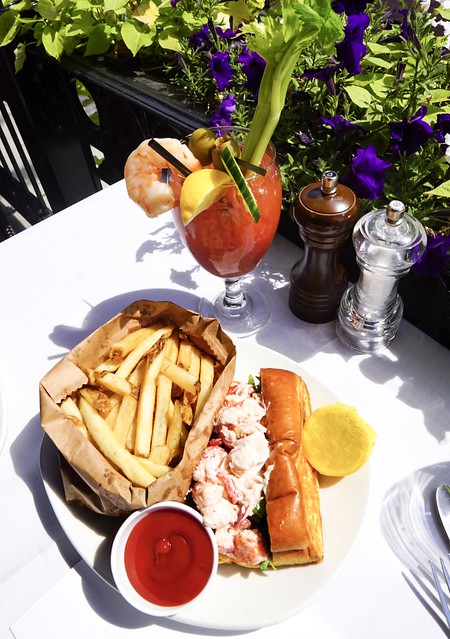 Last but not least was the lobster roll. It was served on a grilled hotdog roll with a bag of fries and a lemon to squeeze yourself. A traditional roll stuffed with fresh lobster that was lightly coated with mayonnaise and on top of some crunchy lettuce. There was nothing added to the roll, and this is a rare moment when I will say that less is more. The fries were also traditional – but again, when something is done just right, less is more. 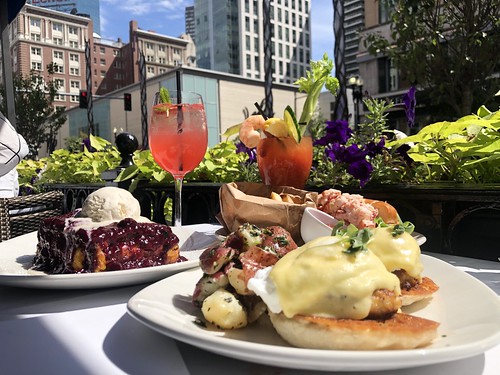 Atlantic Fish Co. has been serving fresh seafood since 1978, but they also serve up a five star brunch!

Atlantic Fish Co. serves a full brunch menu on Saturdays and Sundays from 11 a.m. to 3:30 p.m.