It was a magnificent but crisp winter morning; and I was having a delightful time getting ready with my new bestie, Alexa. Alexa might be more commonly known as Amazon Echo—everyone’s new bestie. Alexa has become a vital part of my morning routine, as she notifies me of the weather and top news headlines, and plays my favorite jams on voice command. In addition to brunch, music is essential to my happiness, so it’s on at all hours of the day. Particularly when I’m blow-drying my hair.

I banged on my roommate Kara’s door in a panic and told her it happened again…She knew exactly what I was referring to. The fuse in my room went out yet again. I hadn’t learned my lesson—this is a reoccurring problem when I have too many items plugged in and on at once. Still unable to locate the correct switch, Kara had to step in to save the day. After this minor hiccup, we were off to a Balkan brunch at Ambar in Clarendon. As I’ve enjoyed the Eastern Market location for dinner, I was excited to have another addition to the brunch scene in my Arlington neighborhood. 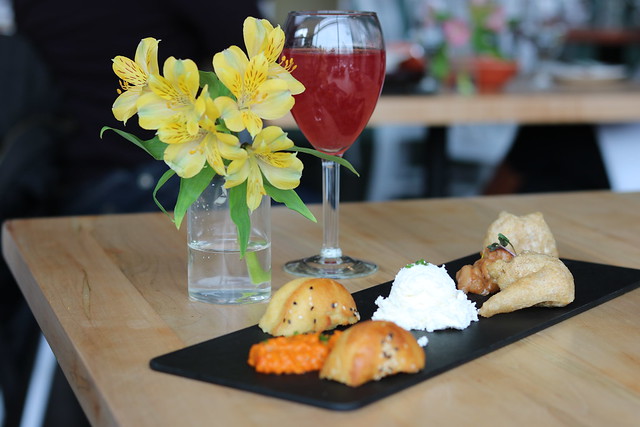 Our server, Emma, was the sweetest Serbian woman. She encouraged us to go for the full Balkan experience, priced affordably at $34, which includes unlimited small plates—with brunch drinks for an additional 25 cents. Kara kicked off the morning with the berry mimosa while I chose cherry. We appreciated being able to switch between several different cocktails with Balkan sparking wine. She found the berry to be refreshing. Mint-infused cherry purée was an innovative twist for a mimosa. Ambar is beyond adorable and lively with greenery peeking against natural tones. 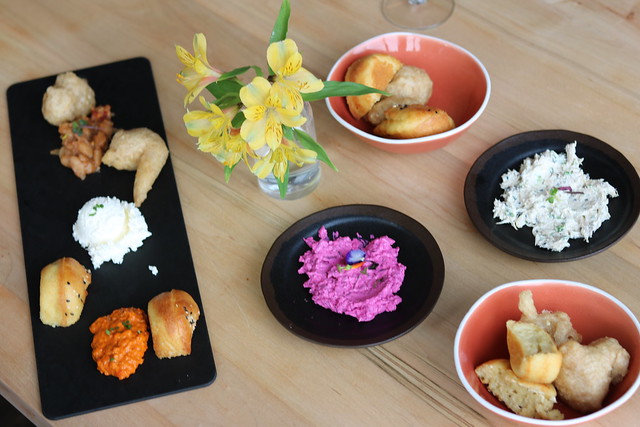 We appreciated the Kajmak much more after Emma explained the process of how the traditional Serbian cheese is formed.

The chef sent beet tzatziki to our table next. We were delighted that he had since this bright pink spread was stunning not to mention flavorful with a hint of garlic. I especially liked how creamy it was. Kara ordered the creamy chicken spread, prepared with sesame seeds, garlic and mayo. She couldn’t get enough of the dip especially paired with fried sourdough.

In the spirit of veg-friendly brunching, I had to try the veggie omelet. The omelet included a variety of peppers, onion, tomato, and spinach wrapped inside the omelet and drizzled in a red pepper sauce. It was cooked well and spicy enough even for me! I switched to the brunch aperitivo, which was stronger than the mimosa and just what I needed. 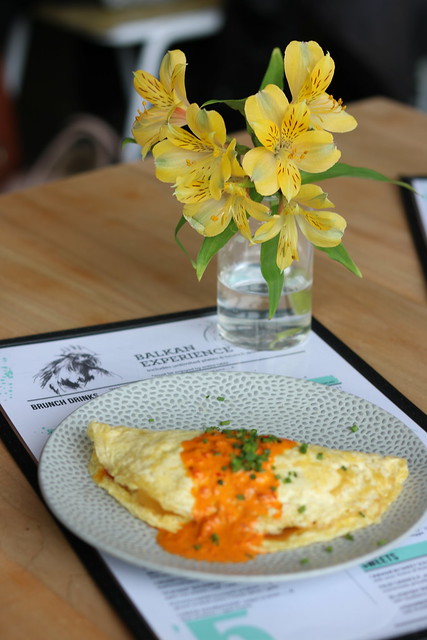 Kara noted how well the textures went together on the pulled pork Benedict. The pork was seasoned to her liking too. The Kajmak cheese melted under a fluffy, soft-poached egg made for a great Balkan twist on a traditional favorite. 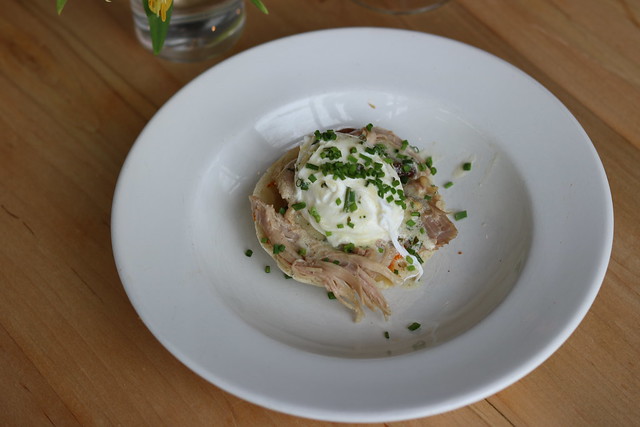 Despite starting to feel satiated, I snuck in a few bites of the zucchini burger. The open-faced sandwich resembled a pancake rather than a burger.  While I was enjoying most of our items, this “burger” took the cake for me. Sunflower seeds and gouda only added to the appeal. 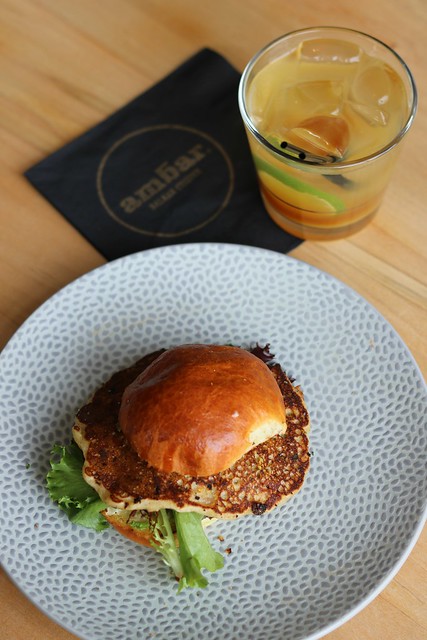 Kara stepped outside her comfort zone when Emma recommended the fried catfish burger, one of Ambar’s best-selling dishes. She was initially hesitant, but once she took a bite, her fears were put to rest. She especially liked the crispiness and flavors.

I generally require potatoes in some format while at brunch. So, we sought comfort with the potato hash. Glazed smoked onion added a great flavor to the steaming, spiced potatoes. 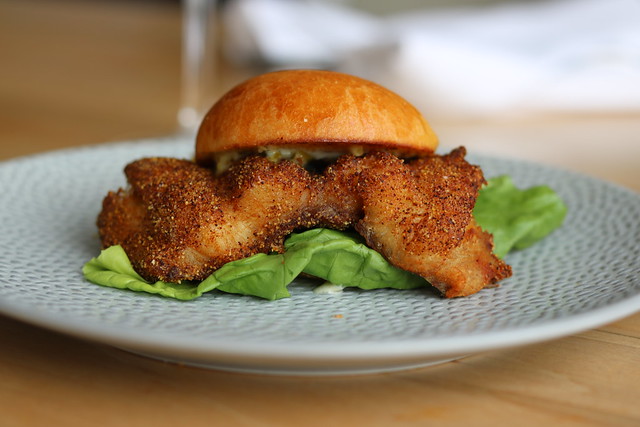 Finally, as if we hadn’t indulged enough, we were ready for dessert. We began with the cinnamon sweet sourdough with Nutella. I was amazed by the creative twist on sourdough from the start and this wasn’t an exception. It was a bit too sugary, but the cinnamon helped offset the intense sweetness. 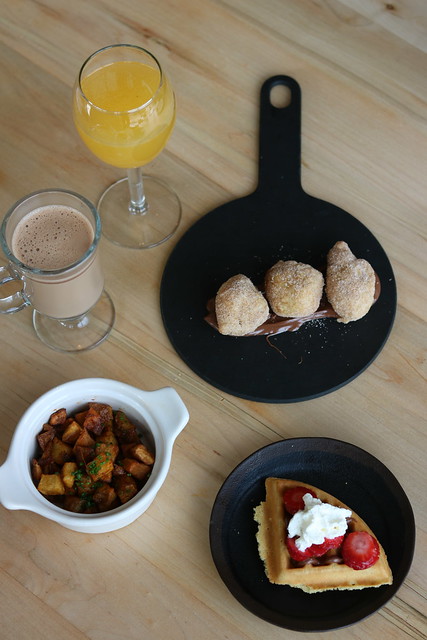 As a sucker for waffles, Kara chose the strawberry waffles. These fluffy waffles came with fresh strawberries, Nutella, and whipped cream. They tasted delicious as expected and she was thankful it was just a small portion. 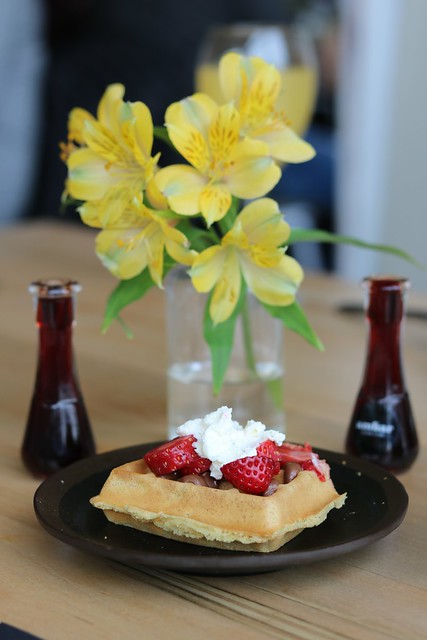 Emma wanted us to have the full Balkan experience and generously brought out rakia shooters to end our meal. We loved hearing stories from her childhood in Serbia and the various traditions coupled with drinking the fruit flavored brandy. Ambar far exceeded our expectations for a bottomless brunch.

The Bitches say: A. For a quality bottomless brunch, fantastic service, and menu equipped with something for everyone in your group.

One thought on “Ambar Clarendon Brunch”