If you ask any seasoned Washingtonian about their experience with Agora’s DuPont location, you’ll likely receive a myriad of praise for the longstanding Mediterranean mezze restaurant. After many years (and I’m sure countless requests), Agora finally expanded and opened a sophisticated second location in Tysons Corner, Virginia over the summer. We were impressed with the restaurant when we were invited in for the opening, so we gladly accepted their offer to host us for brunch! 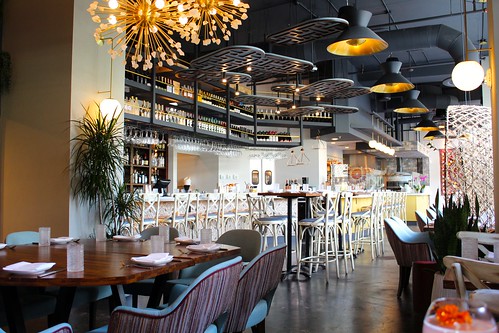 The Tysons location is the polar opposite of the party brunch atmosphere at the DuPont location – and I mean that in the best way possible. The vibe is opulent and calm, with natural light shining in through floor-to-ceiling windows and ornate Turkish furniture that varies in color and shape.

My friend Marco and I immediately noticed the differences in food choices between the Tysons and DuPont locations. Our waiter echoed our sentiments and said in Virginia, they want to serve more Turkish fare. So, he began our experience with a sampler of traditional Turkish and Mediterranean spreads. Our plate included six spreads: labneh, htipiti, cacik, baba ganouj, hummus, and taramosalata. 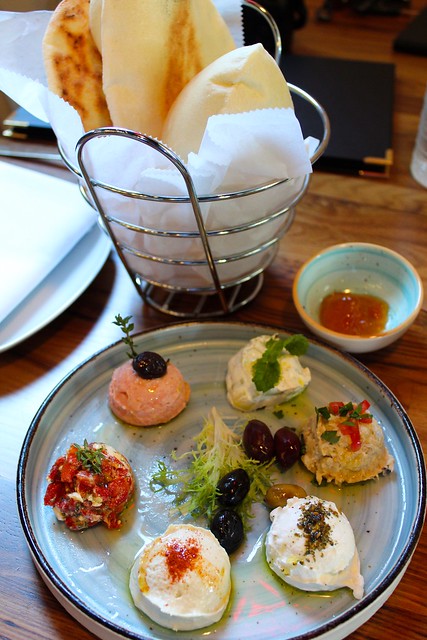 If you’re looking for an introduction to Turkish food, this is a great dish to start with. Each dip was uniquely spiced and varied in texture. The house-made pita we were given to dip everything into was light, warm, and crisp. Cacik, which is a mixture of strained yogurt, cucumber, mint, garlic and olive oil, was my favorite while Marco immediately awarded htipiti, the feta cheese and roasted red pepper dip, as the best from the bunch sampler. 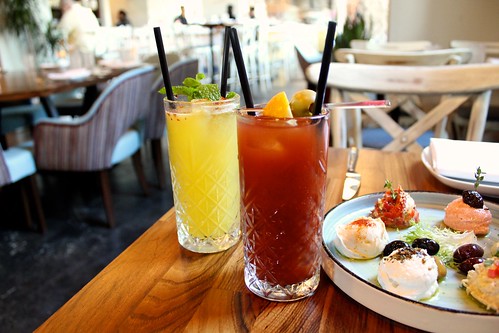 Our server brought out their traditional Bloody Mary and the Istanbul Bey, which is a blend of jalapeño tequila, passionfruit, pineapple, and lime. The Istanbul Bey has a pleasant bite with each sip, but is not sugar-laden despite being comprised of two fruit juices. A chili-lined rim contributed to the heat in the cocktail, and the aftertaste of lime acted like a palate cleanser in between bites. 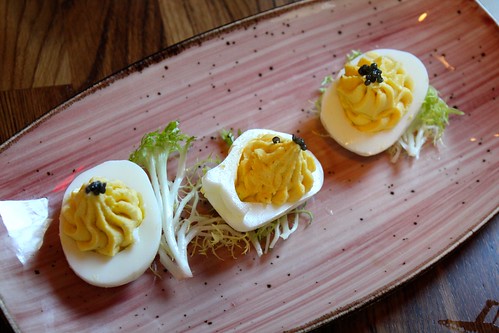 Next up were the truffled deviled eggs, which were my favorite plate of the afternoon. They were creamy and topped with truffle oil that seemed to intensify with each bite. Truffle oil can be overpowering, but in this dish, they just added depth of flavor. We found ourselves taking smaller bites to maximize our time with these tastes! 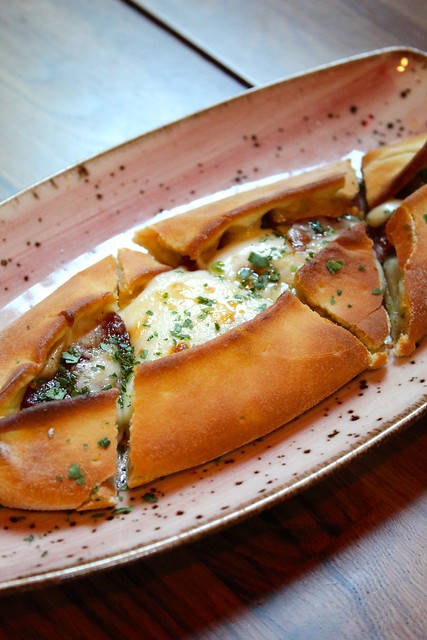 Before our main course, we were treated to one more appetizer: sucuklu pide, a delightful flatbread composed of Turkish beef sausage, mozzarella, and pesto. Bubbly, cheesy, and unlike any other flatbread I’ve sampled, the crust was delicate yet crisp and crunchy around the edges. The sausage was spicy, but well-placed throughout the dish so you tasted more than just meat in a sea of melted cheese. 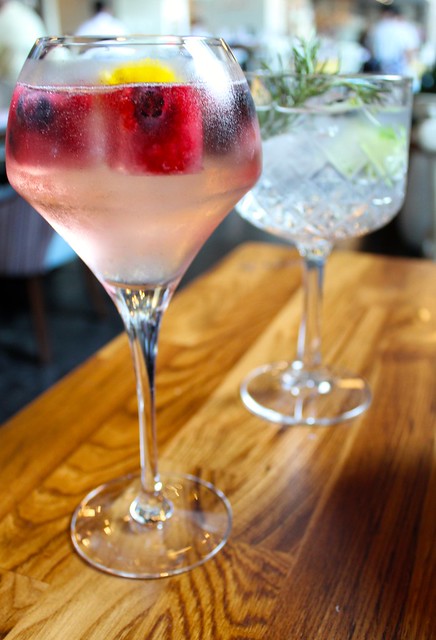 Marco and I both had our eyes on the “Santorini” and the “Mediterranean gin & tonic,” so those were our next cocktail orders. Both visually appealing, the Santorini was refreshing, deceivingly tart and perfect for sipping on a warm summer afternoon. I appreciated the addition of sparkling wine to the rosé, as the drink felt like a spritzer.

Our entrée was a diverse array of egg-based dishes that truly proved how versatile one ingredient can be. For those who have never tried cilbir, I encourage you to become acquainted with it pronto. Made of poached eggs, yogurt, sumac, oregano, and spicy oil, it’s the perfect savory treat that leaves you wondering how you can recreate it when cravings hit. There’s a liberal topping of spices that – when broken within the egg yolk and yogurt – create a sauce that we decided could moonlight as a topping on a meat platter. 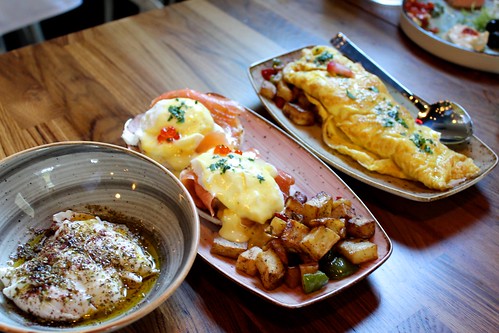 The following two are longstanding brunch favorites that Agora has simply improved for their consumer. Our salmon eggs Benedict and Manchego omelet each came with a generous serving of potatoes, and Marco especially loved how thinly sliced our fish was. The hollandaise was especially citrusy. We think the chef must have grated fresh lemon zest as the sauce was blending. The eggs were fluffier than usual and made a great bed for the fresh Manchego, basil and tomatoes. 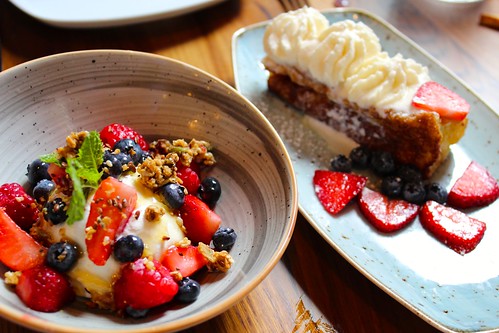 Our dessert was better than expected and the perfect ending to a great meal. A simple greek yogurt parfait with fresh berries, granola, and honey joined our brioche bread French toast topped with baklava syrup, more berries and whipped cream. Just like the eggs, it’s incredible to see the culinary team at Agora manipulate an ingredient like yogurt into several tantalizing plates. The yogurt served as a blank canvas for the fruit and granola to shine, and natural sugars from the berries generated a syrup that integrated well with the honey. The French toast was thick and could have been mistaken for a tres leches cake given how moist the inside was. However, the airy whipped cream and the syrup were both adequate portions that didn’t take away from the notes of citrus and custard in the toast.

Tysons Corner may not have the liveliest nightlife, but the addition of Agora gives Northern Virginia considerable credibility as an extension of D.C.’s diverse food scene.