Piling all the New York Bitches into a corner booth at 5 Napkin Burger Union Square wasn’t easy, but boy was it worth it. After all, we had to celebrate; it was the first all-team meeting for our new NYC squad—an occasion that obviously calls for a round of drinks and a few toasts.

You might be familiar with 5 Napkin Burger for its messy—hence the name—but oh-so-delicious range of burgers, but this burger joint thinks outside the bun, too. And this past Sunday afternoon, we seven hungry Bitches were eager to experience it firsthand. Finding space in the restaurant wasn’t a problem since it was oddly a bit barren for this bustling neighborhood, but we settled in just fine and even had an immediate conversation starter: the hanging butcher hooks, which were supposed to be thematic décor, we guess. We preferred the “but first, burgers” sign, but to each her own. 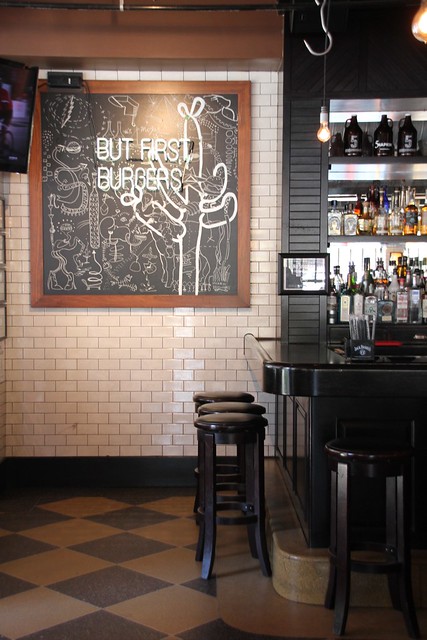 But before burgers, we had to order drinks! To begin, we went for a round of loaded Bloody Marys and some passion fruit mimosas. The Bloody Marys were each adorned with a bouquet-like assortment of lemon and lime wedges, red pepper slices, olives, pickles, celery, bacon, and even a cocktail shrimp—over the top, to say the least. 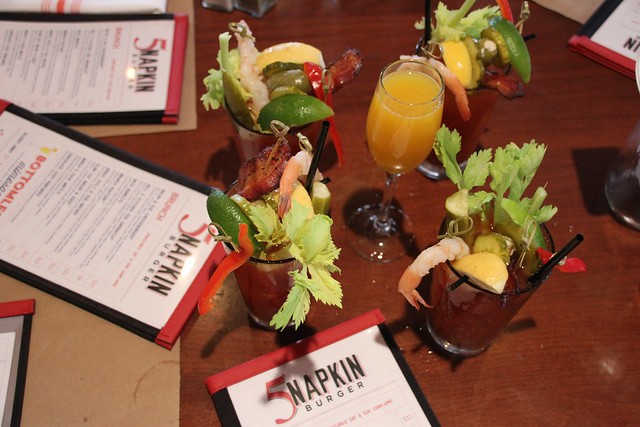 But where we’re concerned, the more the toppings the better when it comes to this classic beverage. Were all those toppings a red herring to distract from a lackluster libation? Absolutely not—the flavor was bold and familiar, though more of a spice kick would have taken it to the next level.

Shruti and Britteny chose the passion fruit mimosas, which were a nice change from the traditional recipe. The mimosa was tangy and refreshing, to say the least. We also tried the regular mimosas—sweet, and a little heavy on the OJ. But overall a good and affordable option at just $16 for bottomless.

When it came time to order the entrées from our incredibly sweet and accommodating waitress, every Bitch’s dream occurred: We ordered one of everything on the brunch menu. An ambitious endeavor, to be sure. 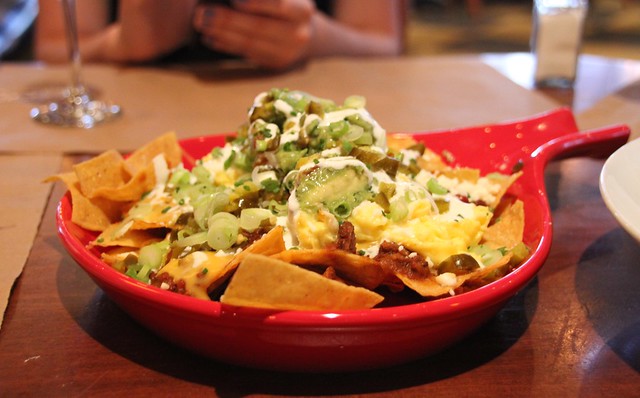 The Angus chili and egg nachos were a surprising delight to all. Since when did breakfast nachos become a thing? Who knows why, but thank goodness they are. The flavorful mix of scrambled eggs, cheese, guacamole, crema, and jalapeños atop tortilla chips was crispy and fun—like eating junk food for breakfast, in the best possible way.

Lindsay and Giselle liked the nachos so much they commandeered the plate to polish it off (after everyone else had a bite, of course). Hot tip: For added flavor, ask for the salsa 5 Napkin Burger serves with the Baja burrito; its flavor pairs really well with this combination. 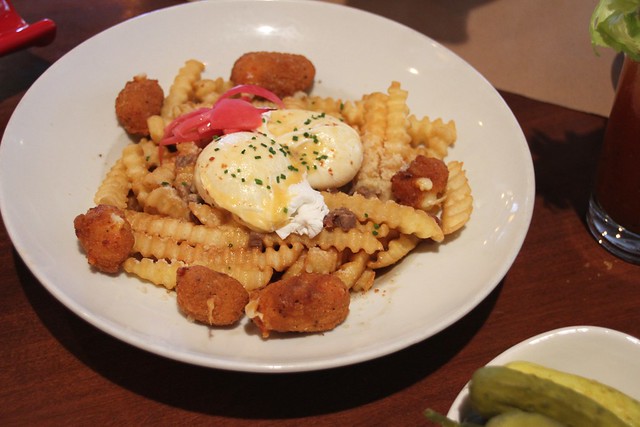 Becca always orders brunch poutine when it’s on the menu. After all, when else is it acceptable to eat greasy french fries with cheese, gravy, and a fried egg? 5 Napkin Burger offered a modern version and the poutine was a collab of all things fried and fatty.

This version came with the type of fries you see in the freezer isle at the grocery store, which wasn’t particularly appetizing. It was topped with crispy cheese curds, chipotle hollandaise, pickled onions, pecorino, and a smoked biscuit gravy, which made the dish just a bit too soggy. 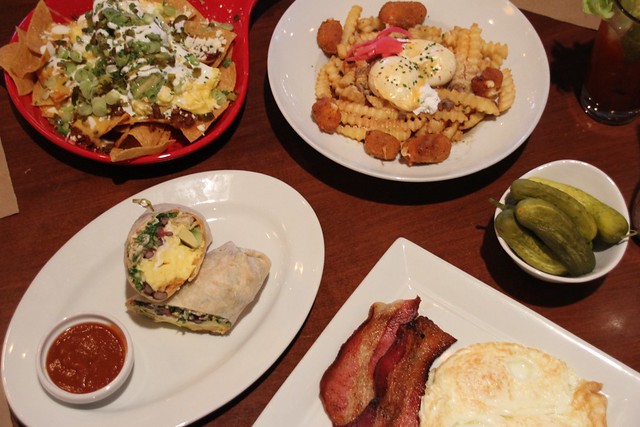 If looking for a more classic breakfast, the slab-cut bacon and eggs is definitely your dish of choice. We’re not kidding when we say this was the thickest bacon we’ve ever seen. Lindsay salivates at the sight of juicy, fatty bacon, so it’s safe to say she ignored us for a solid three minutes. The sandwich had all the right ingredients, but the potato roll was a bit forgettable.

The fried eggs and hash browns were quite delicious, too, but nothing special like some of the other unique items on 5 Napkin Burger’s eccentric menu.

This is a burger joint, so we need to speak to the burgers, or in this case, the bacon and egg cheeseburger, which wasn’t terribly mouthwatering in appearance. Served by itself on an oval, diner-style plate, it looked sort of lonely. The burger was an all-natural beef patty, topped with a cage-free, fried egg, bacon, and a roll. The patty was fine, but the egg and the bacon were better. 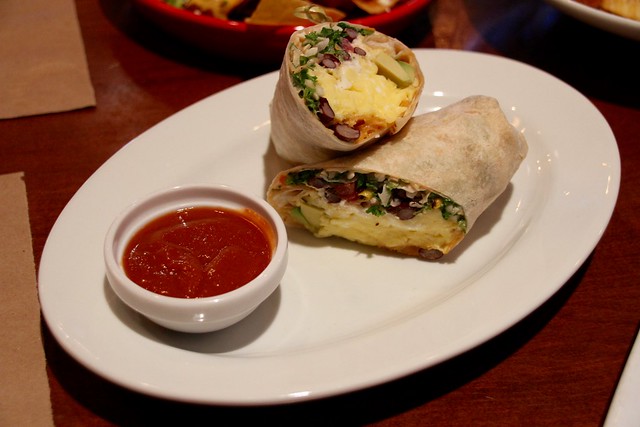 The Baja burrito seemed like the healthiest option on the table. It consisted of Mexican cheese scramble, kale slaw, avocado, and black bean salsa wrapped up in a tortilla. Becca and Britteny dug in, and the wraps quickly fell to pieces.

While the menu stated this dish is usually served with sriracha ranch, we were served salsa instead. Too bad; we would have liked to try the sriracha ranch for a change of pace. As the resident vegetarian, Shruti thought the Baja burrito itself was decent but had too much egg for her taste buds.

We loved the sound of the Hell’s Kitchen egg sandwich, but when it arrived it looked just like the cheeseburger with its large potato roll. Thankfully, the contents were delicious: spicy housemade turkey sausage, a fried egg, pepper jack cheese, spicy mayo, hash browns, and jalapenos. The combination gave the sandwich a solid kick. 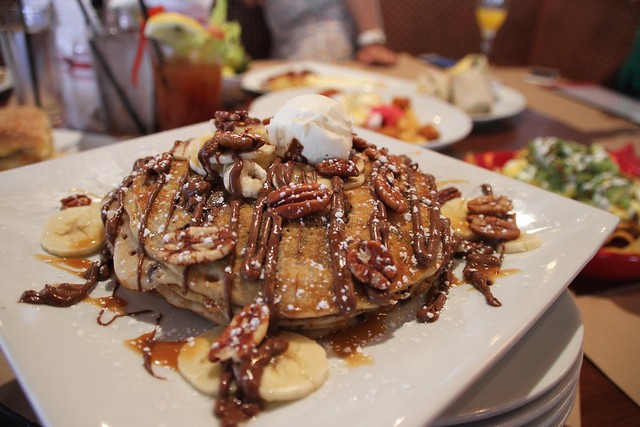 We left two of the dishes for dessert: the pancakes and waffles. They were just too sweet to have before we tried the savory brunch dishes. We had to dig into the chocolate chip pancakes—a choice Shruti did not regret. The warm golden stacks were topped with fresh banana slices, pecan halves, and mascarpone. The fluffy pancakes tasted delightful. The pancakes weren’t too sweet, even though Nutella and maple caramel were drizzled on top. Each bite was delicious, especially with chocolate chips and pecans. These were some of the better pancakes we’ve had—moist, thin cakes, topped with the best sort of fixing’s: chocolate and banana. 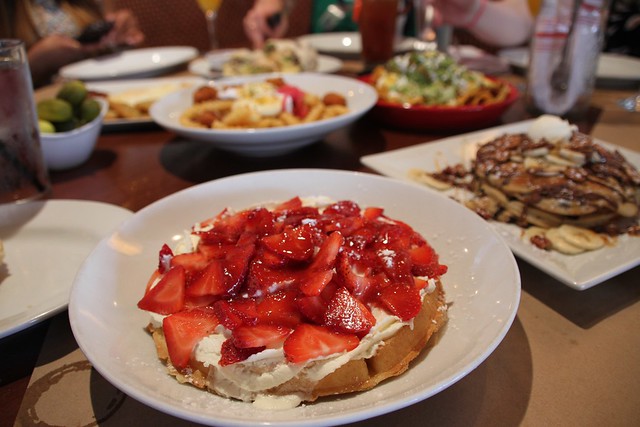 The World’s Fair Waffle, as it’s called, was heaped with whipped cream, strawberries, powdered sugar, and berry syrup, but the waffle itself was the best part. It was sweet (vanilla-malted, in fact) and perfectly light and fluffy. 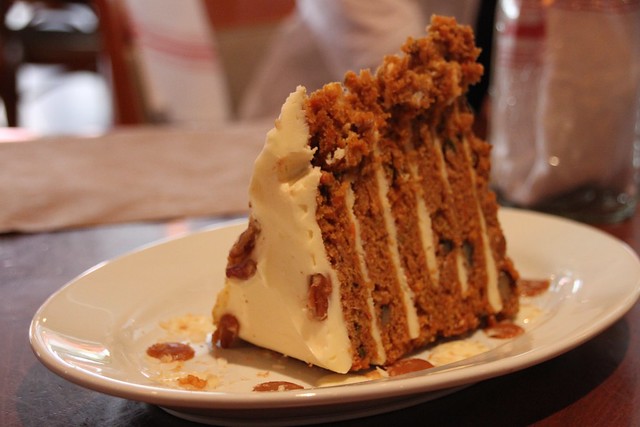 We finished nearly all the dishes on the menu, an epic feat for most, but not for professional brunchers. It was great to gather all the New York Bitches by invitation from the 5 Napkin Burger team. With the addition of Lindsay and Giselle—plus with Shruti moving from D.C. to New York—we’re now a complete team of six! 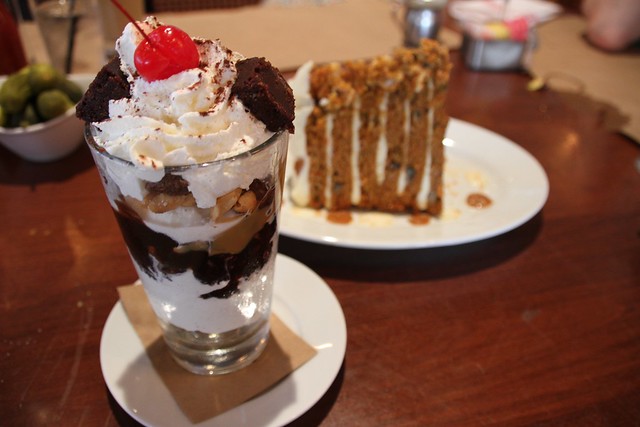 The Bitches say: Four Flutes. 5 Napkin Burger is definitely not the trendiest spot to grab brunch bites, but the delicious American fare is perfect for groups, families, or students running through Union Square.