I have been excited to check out 3 Greens Market, the most recent concept behind Hogsalt mastermind Brendan Sodikoff, since it opened early this spring. As the weather has warmed up in recent months, I decided that sometime this summer I should give it a try. 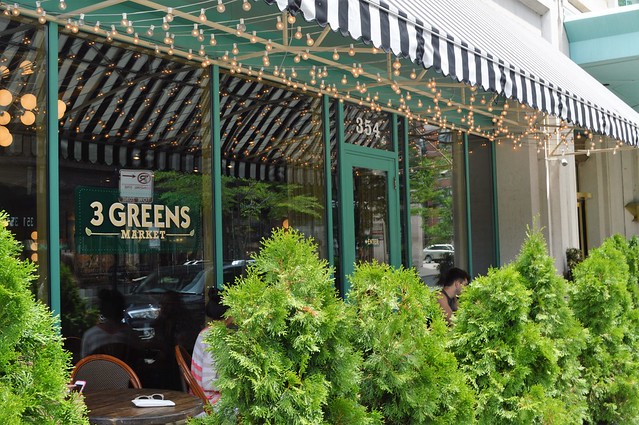 3 Greens Market is a cute hybrid food hall and coffee shop located in River North, directly across from The Hampton Social. This past weekend was the perfect occasion to go check it out.

My dear friend Aline, a girl I met when I lived in DC years ago, was in town visiting from France. She and I had met in the park one day when I was a nanny for twins, and she was an au pair for a family in DC. Aline and I quickly bonded after realizing we both had a strong commonality; she desired to speak better English, and as French minor in college, I desired to speak better French.

We would meet weekly, and while our kids played together we would spend our time going back and forth between speaking in each other’s respective languages. Fast forward to almost six years later, my French still sucks, and Aline’s English is near perfect…c’est la vie! 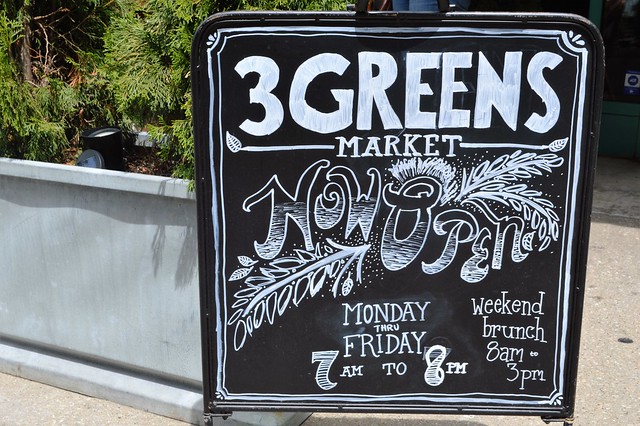 I spent all weekend with Aline showing her Chicago, and on her final day in the city, we decided to brunch and take a boat tour in the perfect weather. We headed over to 3 Greens Market around 11 a.m. to check it out. We were also joined by my best friend Charlotte, who coincidentally also speaks French. 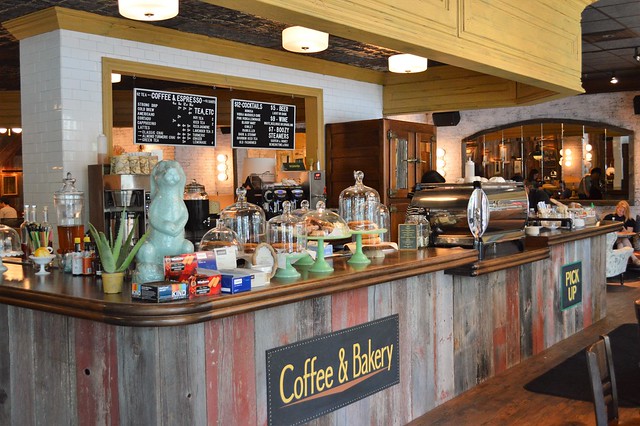 A lovely outdoor patio wraps around the corner space, and upon entering you are greeted with a Doughnut Vault style coffee bar, as well as a colorful putting green for fun! To the left is an extensive buffet bar, full of hot and cold items, with as many as 20 selections on each side it seemed. I was excited to dig right in! 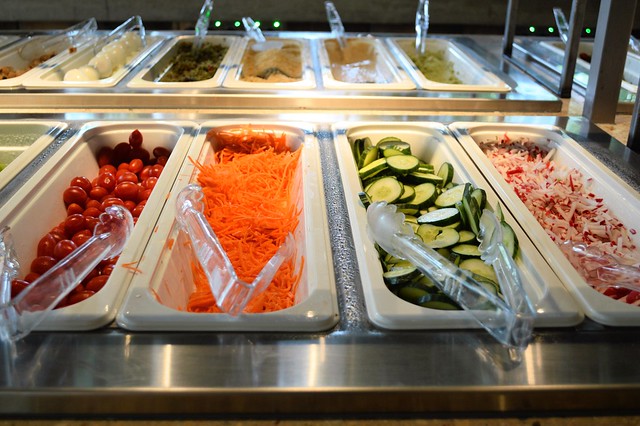 The way 3 Greens Market works is you can either order from the counter Small Cheval Burgers, Dillman’s pastrami sandwiches, or you can build a buffet plate from their hot and cold bar, and it is weighed when you check out.

I was excited to try the buffet, as was Aline. We were both starving. After one quick inspection around both the hot and cold bar, we were ready to dig in. Charlotte opted to order one of her favorite things ever, pastrami, and she headed to to the Dillman’s counter.

I must say, I was a little disappointed when I approached the hot bar. As I looked at the offerings, I was anxious to get them all on my plate; unfortunately, they were pretty much low on everything. There was little bacon, only three “heaven bites” a.k.a.biscuits left, and they looked hard, and there were no pancakes or eggs.

I had already begun to load up my plate, so I paced around anxiously, waiting for the kitchen to bring out more food. It was not even noon yet, and although the place wasn’t crowded, there were others waiting as well. You would assume they would be on top of the food levels during Sunday brunch. I even asked twice for them to refresh, and ultimately after five minutes of waiting I just loaded up on items that were already there.

Aline and I had filled up our plates with what was left at the buffet, and went to the counter to check out. At$9.95 per pound, my plate was just shy of the one pound mark (don’t judge me!) so my plate came to about $10 bucks, which wasn’t too bad for brunch.

I had loaded up my plate with the chilaquiles, the buttermilk biscuits, cheesy grits, bacon, and some pasta from the cold bar. I enjoyed the bacon, cheesy grits, and the chilaquiles. The pasta was average, and unfortunately the biscuits were hard, just as I had imagined, and I couldn’t find anything heavenly about them. 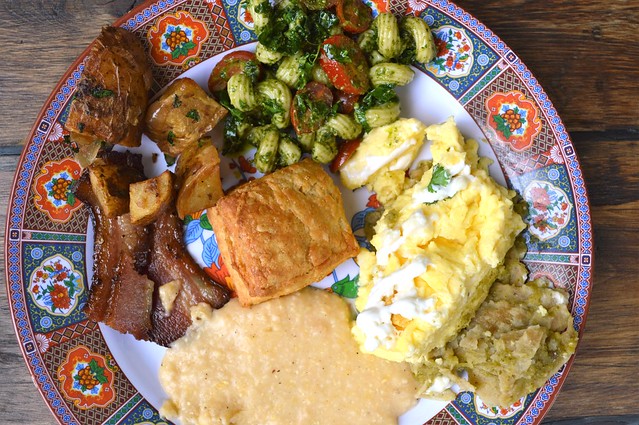 Aline had a good mix of hot and cold items on her plate. She was convinced that I had less on my plate, but had somehow managed to pay more. Regardless, she did enjoy the offerings for the most part, but agreed that the biscuits were unbearable. 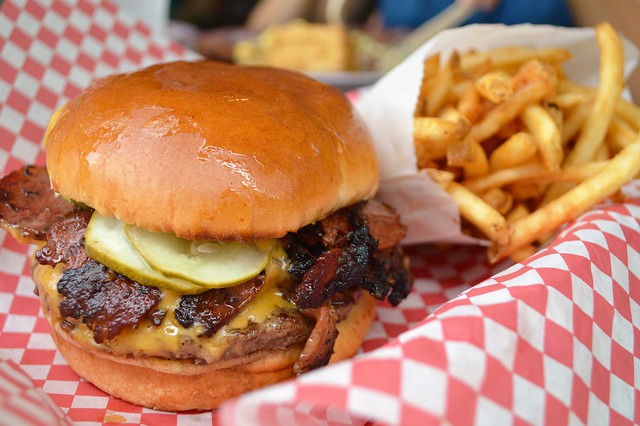 Charlotte’s pastrami sandwich looked beautiful, I must say. She ordered it with a side of fries and the combo looked divine. She said it absolutely tasted as good as it looked, and as a recent Chicago transplant, I was excited she got to try one of the best offerings in the city when it comes to pastrami.

Aline and and I had originally planned to split a Small Cheval burger, but we were actually pretty satiated after our meal. While it was lovely to sit outside and enjoy the gorgeous weather, I must say there were a few things that bothered me about the experience. 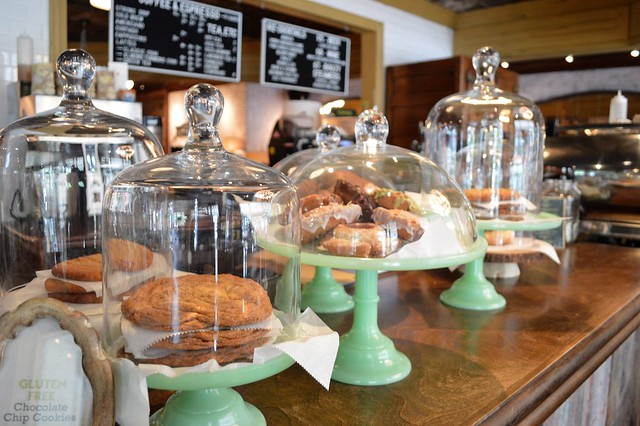 3 Greens Market does not have a setup for guests dining outside, and they do not have servers coming around to clear plates, refill waters, or even get you a fork if you need another one. Everything at the restaurant you must do yourself, and while I don’t have a true problem with that, I was really annoyed that the water cup they give you is the size of a rinse cup at the dentist’s office.

On a 90 degree day, I had to get up constantly to go back inside and walk to the back of the restaurant to refill it—it was just a nuisance. The fact that if you needed more napkins, cutlery, or more ketchup, you also had to make the trek across the buffet hall was equally annoying as well; I would have appreciated a setup closer to the patio.

To be honest, for a first timer, it was all just a little bit confusing and underwhelming, despite how good some of the food was, it was disappointing to still not have been able to try more of it. 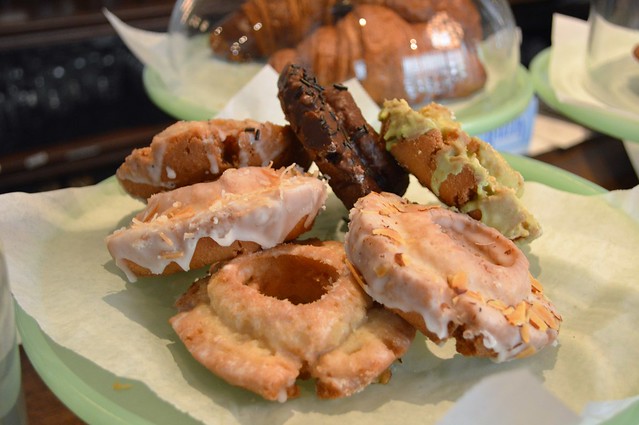 The Bitches Say: C. While this has potential to be a really great breakfast and brunch spot with lots of offerings, they missed the mark this time with their lack of attention to buffet items that needed refilling, and for some not-so-appetizing items as well. Come enjoy Doughnut Vault Donuts and coffee, sit outside, but wait a few months, and hopefully they will work out the kinks for brunch.